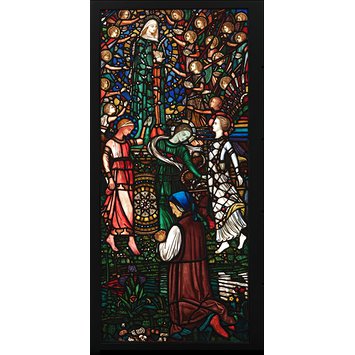 Nathaniel Westlake, a leading designer of the Gothic Revival movement, designed this panel specifically for an exhibition of stained glass held at the South Kensington Museum in 1864. The South Kensington Museum was renamed the Victoria and Albert Museum in 1899. Westlake designed large-scale windows for the firm of Lavers & Barraud, which made this window. The subject matter seems to have been entirely Westlake's choice.

The 'Vision of Beatrice' is taken from the Divine Comedy by Dante Alighieri, an Italian poet writing about 1300-20. In this work Dante relates a vision granted to him of the soul's journey after death through hell, purgatory and paradise. Dante is led through hell and purgatory by the Roman poet Virgil, for whom he had great admiration. In the Divine Comedy, Virgil represents 'Reason', who is always at Dante's side to guide him safely through the perils of life (and through the stages of the afterlife). Reason, however, can take you only so far, and Virgil has to leave Dante before he enters paradise. For this, one needs the grace of Divine Love, and this is how Dante portrays Beatrice.

Dante had known Beatrice, whose real name was Bici di Folco Portinari, in Florence when they were children. She was married to someone else when she came of age. Perhaps for political reasons a marriage to Dante would not have been acceptable. Dante's love for her was probably never a physical one, and when she died at a young age in 1290 he immortalised her in two works: the New Life (La vita nuova) and the Divine Comedy (La divina commedia).

A male figure, representing Dante Alighieri, is kneeling in the foreground at the bottom of the panel. He is wearing a long rose-coloured surcoat over an undershirt with white puffy sleeves. His back is to the viewer, with only a portion of his face visible. He is wearing a blue coif on his head. His hands are clapsed in prayer.

Nimbed figures representing the angelic host minister to a female figure who appears in the top half of the panel. This is Beatrice.

In the centre of the the panel there are three nimbed female figures wearing a pastiche of 15th century costumes.

The upper portion of the panel is composed of small pieces of coloured glass which creates a jewel-like impression.

This panel was made especially for the 'Exhibition of Stained Glass, Mosaics, etc' at the South Kensington Museum in 1864. The publication Building News strongly praised this panel. The museum acquired it after the exhibition closed.

Many of the leading stained glass firms of the time were represented in this exhibition held at the South Kensington Museum (V&A) in 1864.

THE VISION OF BEATRICE FROM DANTE'S PURGATORIO

Much use has been made of the impression of 'jewels', round pieces of brightly-coloured pot-metal glass. This was a feature of the best late medieval stained glass in England, and may be seen in the Beauchamp Chapel of St Mary's, Warwick, the work of John Prudde in 1447-49.