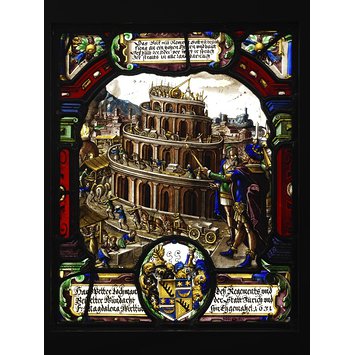 The story of the Tower of Babel is recounted in the first book of the Old Testament, in Genesis. It is often used to explain the origin of the different languages in the world. The descendents of Noah decided to build a tower that would make them famous and that would reach up to heaven. God punished them for their pride and audaciousness by making them all speak different languages so that they could no longer communicate with one another and were thus unable to complete the tower.

The arms on this panel are those of Hans-Petter Lochmann and his wife Magdalena Wirrtin. The use of heraldic arms was more widespread among all classes in mainland Europe than it was in England. People would often commission a small glass panel painted with their arms to celebrate a special occasion such as a marriage, a birth or an event related to their profession. This practice increased dramatically after the Reformation, because religious institutions were not commissioning many large narrative windows for their buildings. Instead, stained-glass craftsmen started to supply works for the growing secular market. Religious imagery continued, but it was now mostly for personal use in the home or in the guildhall.

In the middle of the 16th century new techniques for producing decorated glass were introduced. Glass paints known as ‘enamels’ were used to paint directly onto the glass, similar to painting onto a canvas. The colours were produced by adding metallic oxides to a glass frit mixture. The resulting colour range included delicate pinks, reds and purples. In the 16th and 17th centuries, Zurich was a centre of glass painting. It seems likely that this panel was made there because it was ordered by a Zurich man.

Clear and flashed glass, painted with enamels and silver stain

Came from the collection of Johann Martin Urtein (?), poet and artist of Zurich, died 1827. After his death the whole collection of about 180 panels was sold and went to the Castle of Groditzberg in Silesia. 23 panels of this collection were sold again in 1854 to Charlottenburg and then to England. The rest of the Schloss Groditzberg Collection was bought in 1894 for the new Swiss National Museum.

The arms are apparently those of Lochmann quartered with Wirttin. I have not been able to identify the charge on the Lochmann arms. The arms should read: Quarterly: 1 and 4, Lochmann; 2 and 3 Wirttin.

The use of heraldic arms was more widespread amongst all classes on the Continent than it was in England. People would often commission a small glass panel painted with their arms to celebrate a special occasion such as a marriage, a birth or an event related to their profession. This practice increased dramatically after the Reformation as religious institutions were not commissioning large-scale panels for their buildings. Stained glass craftsmen instead started to supply works to the burgeoning secular market. Religious imagery continued but was now for personal use in the home or in the guildhall.

There is a panel in the Schweizerisches Landesmuseum in Zurich depicting the building of the Tower of Babel and surrounded by the arms of stonemasons and builders of the Guild of Carpenters, dated 1630. The painter of this panel is unknown. The image of the Tower of Babylon is almost identical to the one on this panel. The two panels may have been painted by the same glass painter or they could have used the same source for the Tower. Additionally, on the Landesmuseum panel, there is depicted the arms of Rudolph Fogel [?] which bear a striking similarity to those of Hans Jacob Denniek of the Guild of the Camel (Zurich) as depicted on 2211-1855 (see Object History File for 2211-1855).

Clear and coloured glass panel painted with enamels and yellow (silver) stain. Depicting the Tower of Babel. Made in Switzerland, dated 1631.

THE BUILDING OF THE TOWER OF BABEL

The coat of arms and inscription below refer to Hans-Petter Lochmann of Zurich and his wife Magdalena Wirrtin. 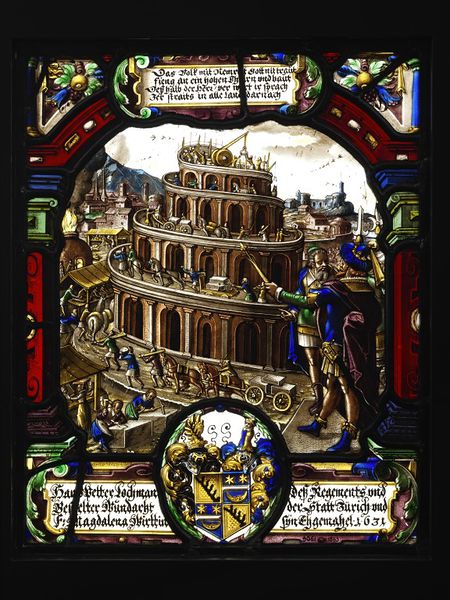