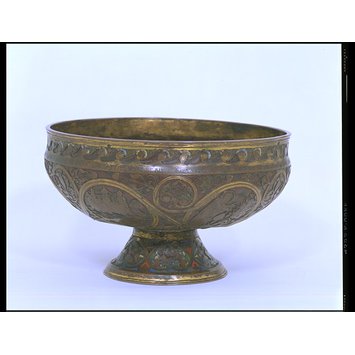 This is one of the most important and famous pieces of English medieval goldsmiths' work. A ciborium is a secure vessel for holding consecrated bread (the Host). Once the bread has been consecrated, it is important to keep it safe from any accident or contamination. It is decorated with Old Testament scenes, which were believed to prefigure events in the New Testament. For example, Isaac carrying the wood to his own sacrifice prefigured Christ carrying the cross to the Crucifixion. The verses on the ciborium are the same as captions which appeared with large images in Worcester Cathedral Priory - which shows how closely monumental and small-scale art in the period were related.

Ciborium, copper alloy, comprisisng a widely spreading bowl, slightly contracted towards the rim, raised on a trumpet-mouth foot. On the outside of the bowl, fragments of surviving enamel, engraved with foliage enclosing six figure-subjects which are Old Testament parallels that would originally have matched six New Testament scenes on the lid. The Old Testament scenes are as follows: (1) Moses and the burning bush; (2) the Sacrifices of Cain and Abel; (3) the Circumcision of Isaac; (4) Isaac bearing the wood; (5) Abraham about to sacrifice Isaac; (6) Jonah issuing from the whale. Each scene is accompanied by explanatory verses on the border above. Inside, on the bottom of the bowl, is an image of a lamb (the 'Agnus Dei' or 'Lamb of God').

+ QVI VELVD ARDEBAT RVBVS ET NO[N] IGNE CALEBAT
'Just as the bush was burning yet not consumed by the fire'
Latin; accompanies image of Moses and the burning bush; corresponds to Old Testament book of Exodus 3:2 (in the version of the King James Bible).

This object was first recorded, with its cover already missing, in two eighteenth century watercolours in London and Oxford (Society of Antiquaries, Harleian Collection, vol. II, f. 30 and Oxford Bodleian, Gough Maps 43, no. 84). A note on the back of the London drawing, by John Talman (died 1726) says: "It was bought about August 1717 out of a Brasier's shop in London and is now in the possession of Mr George Holmes Deputy Record Keeper in the Tower of London". The ciborium passed into the collection of the Earls of Warwick in 1851. By the time it was exhibited at Manchester in 1857 the catalogue noted that: "...the enamels are unfortunately nearly all destroyed". Further damage was caused during a fire at Warwick Castle in 1871.

The early history of the object is undocumented. However, the series of verses, some of them incomplete, which form a commentary to the scenes, are known to be based on verses formerly represented in the Norman Chapter House at Worcester Cathedral priory. These verses described a sequence of either paintings or stained glass windows. This fact, along with the English associations of related works, such as the Morgan and Balfour ciboria, and a crozier now in Florence, provide convincing evidence in favour of this piece having been made in England, possibly in the West of England.

The Warwick Ciborium is one of a group of three important English Romanesque ciboria, of which the others are the Balfour ciborium (also in the V&A) and the Morgan ciborium (now in the Pierpont Morgan Library, New York). All three pieces use the verses from the Worcester Chapter House, and all three have (or had) similar programmes of typological scenes (i.e. juxtaposing events in the New Testament with events in the Old Testament). The style and execution of all three pieces are closely related. The artists, although working in England, seem to have been aware of technical and stylistic developments in mainland Europe, particularly in the Mosan region. Neil Stratford has suggested that the style of the engraving on the Warwick ciborium is rather closer to Mosan metalwork and Northern French manuscripts than the engraving of the Morgan and Balfour ciboria. He believes that the artist may have been a Mosan or Northern French goldsmith, probably working in the same English workshop as the makers of the Morgan and Balfour ciboria.

Historical significance: This is one of the most important and famous pieces of English late Romanesque goldsmiths' work. It is one of the prime examples of a small group of twelfth century English enamels, which includes two other ciboria (the Balfour and Morgan ciboria), along with other works such as a crozier now in Florence, the 'Liberal Arts' casket in the V&A, and an enamelled casket now in Boston, Mass.

The stylistic parallels with contemporary French art underline both the close associations between figurative and decorative styles in all media at this period, and the close links between the art of England and that of the Continent.

The ciborium preserves one half of a decorative scheme known as typology - the systematic paralleling of Old and New Testament scenes, with explanatory verses. The Warwick ciborium lacks the New Testament scenes, but the choice of Old Testament images and the wording of the verses makes clear the original choice of New Testament subjects for the cover. We know that typological schemes of this type were also popular in monumental contexts in England from the work of antiquarians who recorded the verses, but images of this sort have not survived on this scale. The paintings or stained glass in Worcester were not the only images of this type in English Benedictine foundations - similar programmes of images existed in Bury St Edmunds, Canterbury and Peterborough, although these all used different verses. The Warwick ciborium demonstrates that such systematic image programmes were considered equally applicable to small scale works of art, reflecting what might be characterised as a taste for learned and literate imagery amongst certain clerics at this period.

Ciboria are secure vessels for holding consecrated bread (Hosts). Once the bread has been consecrated, then it has become the actual body of Christ, and therefore, it is important to keep it safe from any mishap or contamination. Two types of vessel are used in the church for reserving consecrated Hosts: the pyx is a smaller container, often circular, whilst the ciborium is rather larger, and takes the form of a cup and cover. Today, the distinction in function between the two tends to be that the pyx is regarded as a more portable object, whilst the ciborium is used more for storing Hosts on the altar before distributing them around the congregation. It is unclear whether this distinction was applied in the medieval period. The Warwick ciborium has unfortunately lost its cover.

Some ciboria were locked and suspended above altars on chains. Although the Warwick ciborium retains no evidence of this, the related Morgan ciborium in New York once had a suspension loop, which has since been removed. It is unclear whether this loop was original to the object.

The large size of the Warwick ciborium may indicate that it was intended for use at those times (such as Easter), when whole congregations took communion.

The Warwick Ciborium, copper alloy, decorated with gilding and champlevé enamel (almost all missing), England or Meuse Valley (Belgium, France or Germany), ca. 1150-75, formerly in the collection of the Earls of Warwick

Similarities between this work and others with English connections, along with the fact that the verses engraved on the rim duplicate verses known to have been depicted in paintings or stained glass at the Chapter House of Worcester cathedral priory make it extremely likely that this piece is English, and probably that it was made in the West of England. 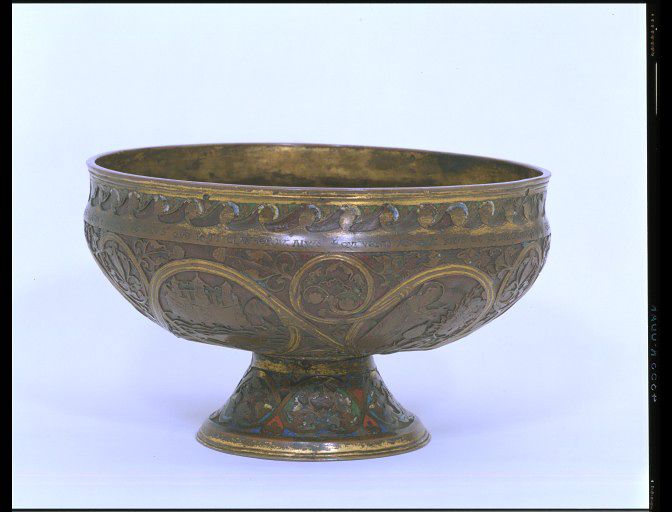