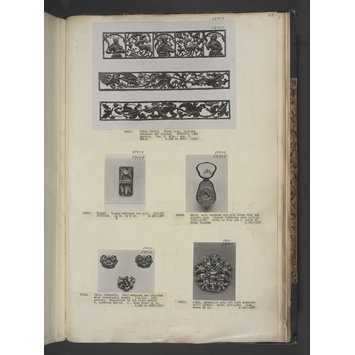 Three ornaments of gold, decorated with transluscent enamel, two with cherub's heads, one with fruits.

Letter given in 1927 to the Museum
'Ornament in gold and enamel by Benvenuto Cellini
Three ornaments, consisting of a group of fruit and 2 angel's heads, being part of a set of 9 similar ornaments by Benvenuto Cellini, which were originally studded in the rim of a gold plate.
The accompanying set of 3 of these ornaments, as well as another precisely the same set, were purchased by the late Thomason Bonar Esq of Camden Plack, Chiselhurst, and by the lat Lord Ruthven, at the sale of the celebrated collection of Prince Poniatovski, which took place at Naples (or Rome?) about the year 1820.

These two groups of 3 ornaments were afterwards set in the clasps of 2 exactly similar bracelets (formed of gold chains) made for Mrs Bonar and Lady Ruthven, either by Messrs Bautte of Geneva or by Messrs Rundell & Bridge of London.

The remaining 3 of the 9 ornaments were in the possession of King George IV who commissioned Messrs Rundel & Bridge to offer any reasonable price for the other sets, the King's wish being to collect the 9 ornaments so as to reconstruct the original plate of Benvenuto Cellini.

Neither of the ladies, however, was disposed to entertain the proposal.

The Dovager Lady Ruthven still retains her bracelet in its original form, of which a rough sketch is enclosed.
Mrs Bonar's bracelet has been unmounted the year before her death, with the intention of forming the 3 subjects into an ornament for the neck by connecting them with small chains of diamonds.
This intention however was not carried into execution.'

Two letters from Lady Mary Ruthven dated 1881 saying that she gave away her 3 ornaments as a wedding present to a friend who was getting married. She knows they were bought in Italy as Cellini's works, and that another set of 3 was acquired by Mrs. Bonar.

Christie's sale, March 1898, lot 521
'521. Two gold mounts chased and chiselled as cherubs' heads, richly enamelled in translucent colours; and a group of fruit and flowers, of similar workmanship.
These 3 pieces of goldsmith's work were formerly part of the decoration of a chalice said to be by Cellini (see correspondance)
From the Poniatowski collection' 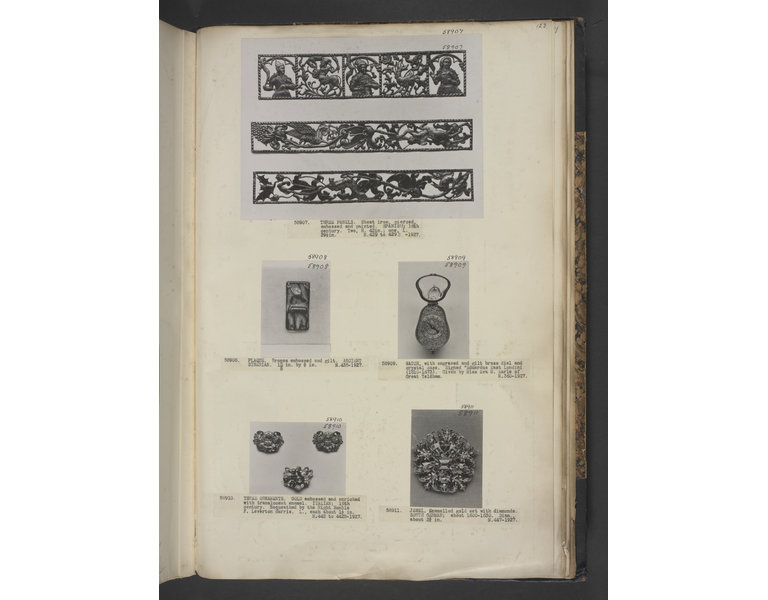