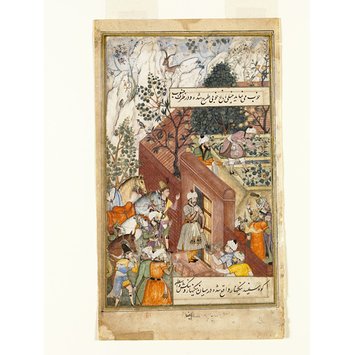 Babur supervising the laying out of the Garden of Fidelity

This is the left side of a double-page illustration to the memoirs of the Mughal emperor Babur, and depicts himsupervising the laying out of the Garden of Fidelity, outside Kabul. This side shows the enclosure wall and figures waiting outside the gate with horses; inside, a figure holds a plumbline to guide the division of the garden into the traditional Iranian chahar bagh, or four-part garden. The line continues across into the right side of the composition (IM.276-1913) where Babur may be seen.
Akbar (r. 1556-1605) ordered his grandfather's memoirs to be translated from their original Turki into Persian, the pre-eminent language of the court and the administration of the empire, so that they could be widely read. The definitive copy of the Baburnama, or 'Book of Babur' was completed by 1589, and at least five illustrated copies were produced in the royal House of Books. This page comes from a dispersed volume that dates to about 1590.

Painting, opaque watercolour on paper, Baburnama illustration, by Bishndas, Babur supervising the laying out of a Kabul garden. This left side of the double-page composition shows the enclosure wall of the garden, and figures waiting outside the gate with horses; inside, a figure holds a plumbline to guide the division of the garden into the traditional Iranian chahar bagh, or four-part garden. The line continues across into the right side of the composition (IM.276-1913) where Babur is depicted supervising the planting. The text is in short panels at top and bottom, each of the two lines running across the pages.

The Persian text in two panels at top and bottom written in black ink should be read across both pages of the composition. There is a faint red "51" in the lower margin, indicating the illustration number in the volume.

Bought from Messrs Luzac & Co., 46 Great Russell Street, London, for £39.2s.6d (with IM.276-1913).
S.A.A Rizvi, in Religious and Intellectual History of the Muslims in Akbar's Reign (Delhi, 1975, 220-221), notes:
The Babur Nama, in Chaghta'i Turkish, a mine of information relating to Central Asia, Kabul and India, was of an absorbing interest for the Indian Timurids. The portions relating to the Indian period of Babur's autobiography had already been translated by his sadr, Zainu'd Din Khwafi, into Persian. In 994/1584 Mirza Payandah Hasan Ghaznavi commenced its translation at the insistence of Bihruz Khan (who was afterwards given the title of Naurang Khan by Akbar and died as a governor of Junahgarh in 1002/1593-94), but he could not translate the account beyond the first sixth and a part of the seventh year. Subsequently one Muhammad Quli Mughal HIsari continued the work and brought it down to 935/1528-29. Akbar ordered Mirza 'Abdu'r Rahim Khan-i Khanan to translate it again and he completed the work in 998/1589. He presented his translation to the Emperor as he was returning from Kabul on 24 November 1589. The Khan-i Khanan excelled all the previous translators. 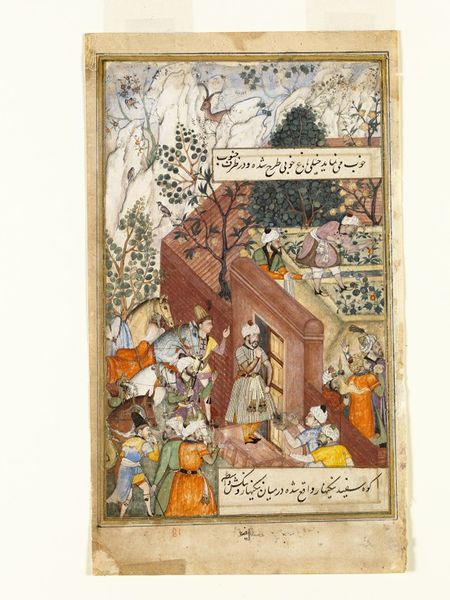