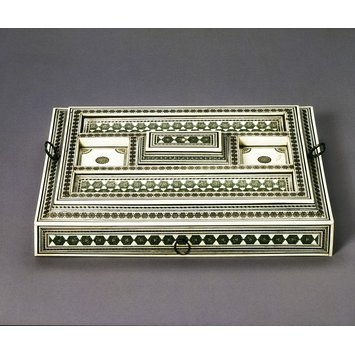 This inkstand is decorated with sadeli, a geometric micromosaic composed of various woods, metals and ivory, arranged in patterns as a veneer over the wooden carcass. Such work was much practised in western India, especially in and around Bombay, for which reason such objects were described under the blanket heading 'Bombay boxes.'

Rectangular inkstand, of rosewood, partly veneered with sandalwood, the exterior with parquetry of ivory and khatam kari ('sadeli') within borders of khatam kari, ebony and ivory, with silvered brass rings. The raised central section has three wells, the middle with detachable lid, with a long concave well on each side for pens. The concave exterior moulding of the top of the inkstand has heart-shaped silvered brass carrying handles. The front contains a shallow drawer with a silvered brass ring pull.
The stand had four turned ivory feet, now missing, and the detachable lid of the central inkwell originally had a turned ivory knob, now separated.

Rosewood, partly veneered with sandalwood, the exterior with parquetry of ivory and khatam kari

The inkstand was bought by the East India Company in Bombay in 1855 for Rs. 20. It was bought to be displayed at the Paris Universal Exhibition, 1855, and was acquired from the exhibition by the India Museum. It was transferred to the South Kensington Museum in 1879, when the India Museum's collections were distributed between different institutions. 1880 Register Entry: [Room 8. Wall Case 30.] '01,159. INKSTAND. Sandalwood, inlaid with ivory and mosaic; Calcutta. 4,296'

According to Sir George Birdwood, the maker was one of the two longest-established master artisans specialising in what the author called 'sadeli', in Bombay in 1862, operating with his brother from the same workshop (Jaffer, 2001, p. 317, who notes that the name is also recorded as Atmaram Wulleram).

Exhibited at the Paris Universal Exhibition, 1855

Geometric micromosaic (later known as sadeli) was usually used on small items such as boxes and picture frames, though games tables and chairs were also made. By 1850 these wares were exported in large quantities to Europe, for sale and display at international exhibitions. The workshop of Attamaram Vulleram was one of 50 Bombay firms in 1862. [01/12/2012] 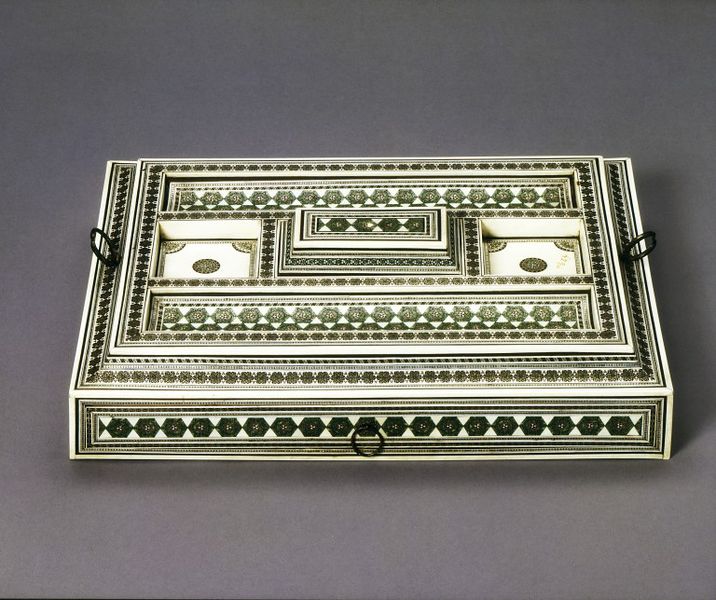