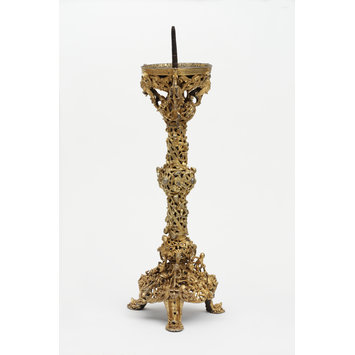 This unique candlestick is a masterpiece of English metalwork, probably made by a goldsmith. It is made in three sections, each separately cast by a process known as 'lost wax'. The dense decoration is formed of wonderful figures and apes interspersed between thick intertwining shoots of foliage. Three long-eared dragons with outspread wings form the supporting feet. The large knop (or knob) in the centre of the stem shows the symbols of the four Evangelists.

Of the three inscriptions in Latin, the most important is the one on the stem,above and below the central knop, which refers to the donation of the candlestick and reads: 'The devotion of abbot Peter and his gentle flock gave me to the church of St Peter at Gloucester'. This must refer to what is now Gloucester Cathedral, but which was then a Benedictine monastery, where there was an abbot named Peter between 1104-1113. A slightly later inscription inside the grease pan states that the candlestick was given by Thomas de Poche, whose identity remains unknown, to the Cathedral of Le Mans, where it remained until the French Revolution.

The Gloucester Candlestick, gilt copper alloy with niello decoration, and small glass beads. The candlestick consists of three sections: a triangular base surmounted by a knop; the main stem with a central knop and the grease pan with a knop beneath. The three sections are held together by a central metal rod which also forms the pricket and may be original.

The base, stem and grease pan support, are of open work decoration, formed of intricately modelled beasts and human figures intertwined with foliage. The base is supported on three feet formed of long-eared dragons with spread wings. Human figures, serpents and canine-headed winged beasts adorn the main body of the base while a centaur and two human figures decorate the knop. On the main stem, men battle canine-headed beasts and an inscription spirals downwards on a thin band. The central knop is decorated with the symbols of the evangelists. The bowl of the grease pan is surrounded by interwoven foliage supported by three winged dragons. The knop beneath the pan is adorned with figures on the back of beasts one rider is an ape. The grease pan bears two inscriptions, one on the inside and one on the outside of the rim.

The shape of the candlestick with triangular base and tri-knoped stem is similar to that of a 12th century survivals at Rheims and Prague and a pair of candlesticks made for Bishop Bernward of Hildesheim. The Hildesheim candlesticks were made using the same lost-wax process and were discovered buried with the bishop on the day of the translation of his relics in 1194. This has given rise to speculation that the Gloucester candlestick could be the product of German craftsmanship. Fantastic compositions of men, monsters and foliage were characteristic of the period and not of any one school: however, attribution of the work to an English artist has become generally accepted on the basis of close stylistic similarities between the candlestick and manuscript illuminations produced in Canterbury in the late 11th and early 12th centuries. Borg noted that, in no other work in metal does the relationship with manuscript illumination stand out so strongly and it is the close association between the two media that led Harris to identify Canterbury as the probable place of manufacture. Stratford contests Canterbury preferring the notion of a professional travelling around the south of England.

Cast using the cire-perdue (lost wax) process, the candlestick was made in three main sections using coper alloy. the alloy has been analysed by Dr Roger Brownsword of Lanchester Polytechnic: copper, zinc, tin, lead, silver nickel, iron antimony and arsenic.
Marian Campbell suggests that not all the parts have the same composition although they all have the same ingredients.The silver content is unusually high. The larger heads were probably cast separately and slotted into the bodies, blue glass beads have been inlaid into the eyes of some figures, the flowers and dragon bodies. Chemical analysis of an eye of one of the beasts shows them to be a soda/potash/lime glass possibly coloured with iron. The silver roundels on the stem knop have been enhanced with a silver, copper and lead based niello decoration. The object has been gilded and the gilding renewed.

'+ ABBATIS. PETRI. GREGIS / ET: DEVOTIO. MITIS / + ME: DEDIT: ECCLESIE: / SCI: PETRI: GLOECESTRE:'
'The devotion of Abbot Peter and his gentle flock gave me to the church of St Peter at Gloucester'
This inscription spirals downward around the main stem of the candlestick on a thin banner.
Borg considers that the slightly odd Latin word order may be the result of a desire to produce a rhyme.

LVCIS ON(VS) VIRTVTIS OPVS DOCTRINA REFULGENS/PREDICAT VT VICIO NON TENEBRETVR HOMO
Three possible translations have been proposed :
1) The debt of light is the practice of virtue. The glorious teaching of the Gospel preaches that man be not benighted by by vice. (Charles Oman, Monograph 1958)
2) This upholder of light is the work of virtue. With its brightly shining instruction, it preaches that mankind be not overcome by the darkness of vice. (Anabell Harris, MA thesis 1964)
3)The burden of light is the work of virtue.Shining doctrine teaches that man be not shadowed by vice. (Alan Borg, British Archaeological Association 1985)
This inscription runs around the outside of the grease pan rim.

HOC CENOMANNENSIS RES ECCLESIE POCIENSIS/THOMAS DITAVIT CVM SOL ANNVM RENOVAVIT
Thomas of Poche gave this to the church of Le Mans when the sun renewed the year.
This inscription runs around the inside of the grease pan rim.

The Museum acquired the candlestick in 1861 from the collection of Prince Soltykoff. The prince had obtained it for 20,000 francs at a sale at the Hôtel Drouot on 7 May 1857 of Monsieur d'Espaulart's (of Le Mans) cabinet de curiosités. The candlestick had resided in Espaulart's collection since its removal from Le Mans Cathedral in about 1788 shortly before the revolution. The inscription inside the grease pan records the gift of the candlestick to the cathedral of Le Mans from a Thomas of Poché. A. Martin in La Chandelier de Gloucester suggests that Thomas was the Lord of a manor in the province of Maine, of which Le Mans is the capital.

Before Le Mans the only definite detail of provenance is the inscription on the stem.The inscription suggests that the objects was commissioned by Abbot Peter of the Benedictine Abbey of St Peter, now the Cathedral at Gloucester, between 1104 and 1113. Peter, formerly Prior of the monastery, succeeded Serlo who died in 1104. He was formally elected Abbot 5th August 1107 and died on 17 July 1113 . The Historia et Cartularium Monasterii Sancti Petri Gloucestriae (1856) : relates that Peter exercised himself for eleven years in the study of scriptures, he obtained many lands, protected the monastery with a stone wall and procured many books. His gift of the candlestick is not mentioned. In March 1122 the Abbey was destroyed by fire, an event recorded in the Anglo-Saxon chronicle. A few books and three mass robes are listed as survivals, the candlestick is not mentioned.

Historical significance: This is one of the outstanding survivals of English medieval goldsmiths work, exceptional in the skill of its craftsmanship and in the fact that it can be closely linked and dated to an individual patron and an important English Cathedral.

It has been suggested that the combat between men and beasts depicted in the openwork decoration, continues the theme of the grease pan inscription and represents the struggle between light and darkness, the forces of good and evil. While the evangelists on the central knop do generally signify enlightenment obtained from the gospels, the significance of the men and beasts is less certain. Whether the mythical and fantastic creatures of Romanesque art were used primarily as decoration or if they served an iconographic purpose, is a wider argument in which the candlestick is involved . Borg believes (based on St Bernard's distaste for the fantasies of Romanesque sculpture) that an iconographic interpretation of the decoration is possible, while Harris believes that the animals need have no particular moral significance.

Little evidence has been found that candles were placed on altars in the first thousand years of Christian worship. Initially the ceremonial use of lights was associated with worship of the Roman Gods and pagan ritual and was actively opposed. These non-Christian connotations were to wane probably in the face of the practical need for illumination, which was gradually followed by the return of a symbolic role for the candle.
The precise reasons for the introduction of the candles on to the altar remain unclear. The earliest documents relating to the use of candles on the altar are those of the 11th century Cluniac Consuetudinary of Fleury, which allow for very specialised usage at Christmas, Easter and Pentecost. The earliest English documented example - a list of gifts made in 12th century by Henry of Blois to Winchester Cathedral post-dates the Gloucester candlestick. However, at 51 cm high, the Gloucester candlestick is too small to have stood on the ground, and would almost certainly have been used either on an altar or on a stand close to the altar.

If it is indeed an altar candlestick the object is the second oldest surviving example of its type, preceded only by a pair made for the German saint, bishop and patron Bernward of Hildesheim (b ca. ad 960; buried Hildesheim, 22 Nov 1022; canonised 1192). It has been proposed that the candlestick was also one of a pair, however this claim remains to be substantiated. An English illustration on a twelfth century ivory box in the collection of the V&A, depicts a single altar candlestick on an altar dressed for the rites of Easter and demonstrates that such objects could be utilised individually. Borg proposes that the individual character of the inscription and the presence of all four evangelists on the one object may suggest that it was unlikely to have had a pair, however Campbell believes there to be no reason why a pair could not have been similar.

Harris notes that the large candlestick was a common piece of twelfth century church furniture and several instances of their being presented as gifts. Conrad prior of Christ Church Cathedral Priory 1108-1126 gave a "bronze candlestick of wondrous size" to his institution, Abingdon Abbey received a gift of a large candlestick donated by Abbot Faricius 1100-1117 and Abbot Benedict of Peterborough 1177-1193 had a large candlestick made for his abbey.

The Gloucester Candlestick. a candlestick in three sections: a triangular base surmounted by a knop; the main stem with a central knop and the grease pan with a knop beneath.

THE GLOUCESTER CANDLESTICK
Gilt bell-metal
Inscribed as having been given to the Abbey (now cathedral) of St. Peter, Gloucester by Peter, Abbot from 1104-1113.
Later it passed into the possession of the Cathedral of Le Mans, France
English; about 1110
Inscriptions:
On the stem: + ABBATIS. PETRI. GREGIS. ET. DEVOTIO. MITIS. + ME. DEDIT. ECCLESIE. S(AN)C (T) I. PETRI. GLOECESTRE.
On the bowl: + LVCIS. ON (VS). VIRTVIS. OPVS. DOCTRINA. REFVLGENS. PREDICAT. VT. VICIO. NON. TENEBRETVR. HOMO.
Within the bowl: + HOC CENOMANNENIS. RES. ECCLESIE. POCIENSIS. THOMAS. DITAVIT. CVM SOL ANNUM. RENOVAVIT. [] 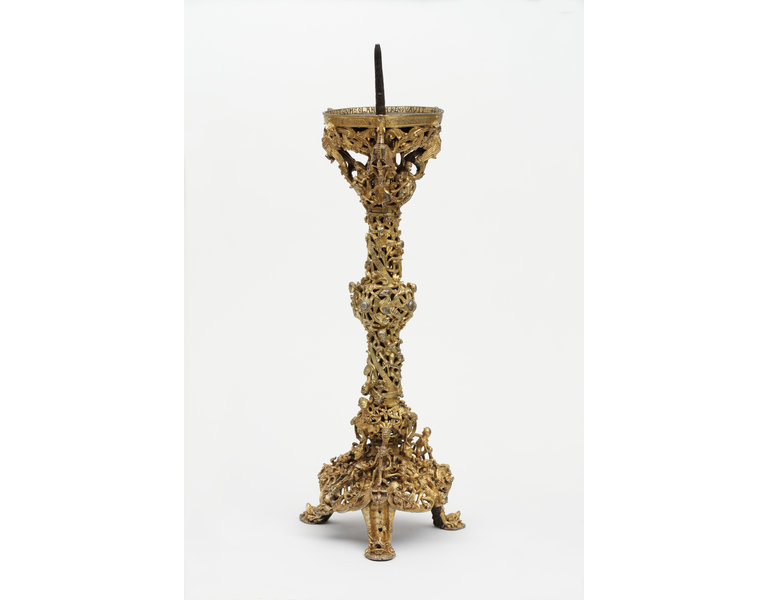