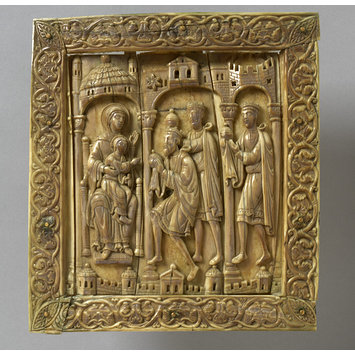 The Adoration of the Magi

This and the two other plaques in the V&A (Inv.nos: 144-1866, 378-1871) belong to the same ensemble, together with two other reliefs in the Metropolitan Museum in New York (showing the Three Maries at the Sepulchre and the Incredulity of St. Thomas);
They are the same size and are carved in an identical style and display the same border designs.
The size and number of the plaques suggest that they probably once formed a large altar frontal or decorated a pulpit, in an ensemble that probably consisted of nine panels.
Each is made up of several pieces of ivory, and there is evidence that they were once coloured. The expressionless oval faces in three-quarter profile and the rounded forms are features of Romanesque sculpture and manuscript painting in the Cologne area. Unusually the carver used rows of dots to emphasise curved lines.

The Virgin is seated to the left under a portico supported on four columns; the Child holding a scroll in his left hand and sitting on her knees, holds out his arms to the three Kings, who approach from the right bearing their gifts in covered cups; they are crowned and wear short tunics and mantles. In the foreground are the walls of a city and above the head of the first magus is the star. The surrounding border is of foliate scrolls, each enclosing a large blossom. The panel is made up of three plaques of walrus ivory, dovetailed together, and four strips of border, with later copper pins.

From the Webb collection; formerly in the Mertens Schaaffhausen collection, £280.

Historical significance: One of the main features of the style is the use of rows of dots to emphasize curved lines, which has given the group its name: 'gestichelte' or 'pricked'.Another series of plaques, slightly smaller, less well preserved, and with a slightly less imaginitive expression of form, but stylistically and iconographically almost exactly the same as the larger series is now divided between Cologne, Berlin and the V&A (a second Ascension). Other works showing the same style confirm the Cologne provenance suggested by the expressionless oval faces shown in the three-quarter profile and the sofly rounded forms, which can be seen in romanesque sculpture in the Cologne area, and in two contemporary illuminated gospels, made in Cologne, now housed in the Hessisches Landesmuseum in Darmstadt (Exh.cat. 'Die Zeit der Stauffer',
Stuttgart, 1977, no. 620.)

Two other reliefs in the Metropolitan Museum in New York, showing the Three Maries at the Sepulchre and the Incredulity of St. Thomas, belong to the same ensemble; the size and number of the plaques suggest that they probably once formed a large altar frontal or decorated a pulpit. 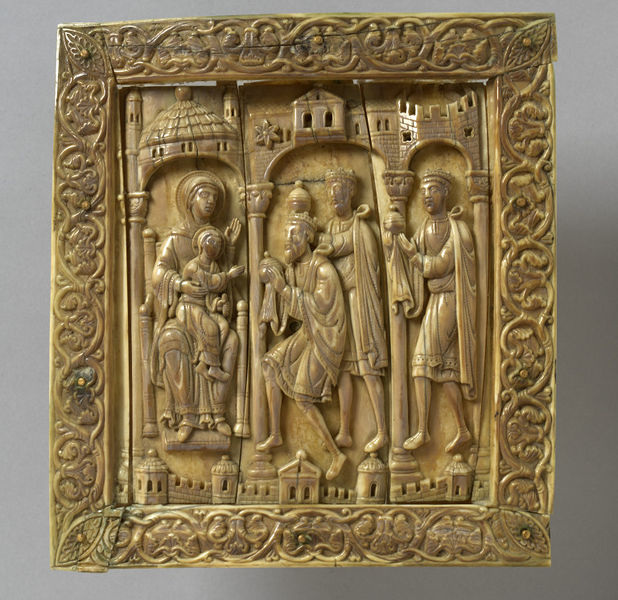