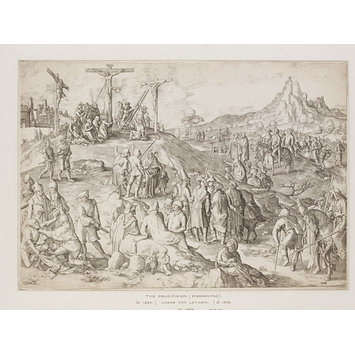 This impression shows how a printing plate could pass through several owners and continue to satisfy demand for an artist's prints even after it had worn down. Lucas van Leyden’s renown meant that his plates were reprinted long after his death to satisfy demand from print-collectors. This print was made from Lucas van Leyden’s original plate. In the corner, printer Maarten Peeters later added his address to the plate, which another owner then erased. To extend its life, the plate was re-engraved when it had become worn down. Some details have completely changed, such as the boulder beside the dog and the buildings top left. Unfortunately the original quality of the print is barely discernable.

At this time a canon of printmakers was being established by writers like Giorgio Vasari (1568). Vasari considered Leyden almost equal to Albrecht Dürer. This was one of three works singled out as his best.

Carel van Mander in his 1604 Schilder-boek describes Leyden as being particular about the quality of the prints he sold, burning 'great heaps' of them. Ironically, there survive more poor impressions than good ones because Leyden's renown led to the plates being reprinted and reworked long after his death.

Depiction of Mount Calvary featuring a landscape setting with Calvary to the left in the background with three crucifixions, that of Christ surrounded by a group of mourners and in the foreground and to the left various groupings of people.

Described as 'third state, the date corrected and retouched' in Dyce catalogue. However, later state according to Hollstein, address of a printer Maarten Peeters, bottom right, has been erased and some details have been completely reworked eg some of the buildings in the background, the rock to left of dog is square in original but a boulder here, which would make it VI state; this may be original Leyden plate which passed over into ownership of MP and was reworked and reprinted.

There is a design for a copy after an earlier state of the original at Dyce 388.

Described as 'third state, the date corrected and retouched' in Dyce catalogue. However, according to Hollstein VI state (see object history note). 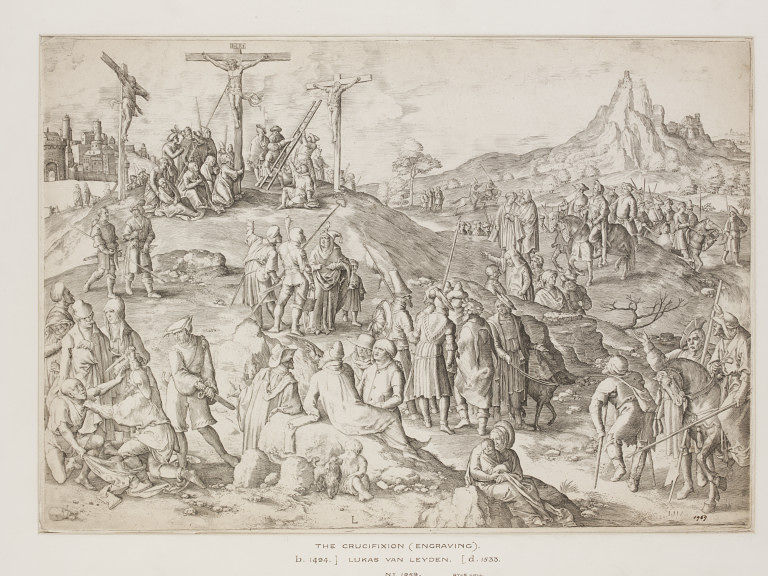