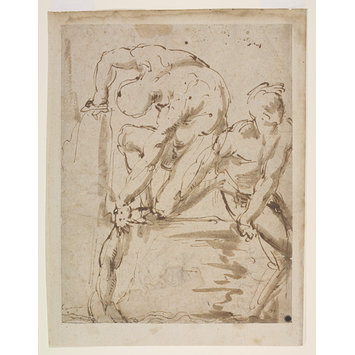 Study, from the Cartoon of Pisa, of the man assisting his companions by the arm, and the naked soldier seated by his side; Pen, washed.

Baccio Bandinelli (Attributed to)
Michelangelo (After)

31
Study of two males nudes after Michelangelo’s cartoon for the Battle of Cascina ; below a slight sketch of a hand in black chalk
Inscribed ‘Michelangelo’ and on the back ‘Schizo di mano propria di Michel Angolo buonaroti… 2’

LITERATURE Dyce Catalogue no 163 (under Michelangelo)

According to Vasari, Bandinelli was the most assiduous of those Florentine artists who made Michelangelo’s cartoon their study during the short period when it was accessible to them, before it was divided up, scattered and destroyed. The two figures represented in this drawing differ substantially from those shown in any known preparatory studies by Michelangelo and in later copies after the cartoon. The man helping his comrade out of the river is kneeling on one knee instead of two, and his right hand is placed on a rock or tree stump instead of on the ground; while his seated companion leans over to the left instead of to the right and his arms are in a new position. There is no way of deciding whether Bandinelli introduced these variations, or whether they are based on an earlier preparatory study by Michelangelo. The best extant illustration of the lost cartoon is the grisaille copy at Holkham Hall. This copy is illustrated in numerous works, inlcuding BB. 1938, 3, fig. 584 ; W. Köhler, ‘Michelangelo Schlachtkarton’in Kunstgeschichtliches Jahrbuch der K.K. Zentralkommission für Erforschung etc., Vienna, I, 1907, p. 138, pl. 12 ; C. de Tolnay, Michelangelo, Princeton, 1943, I, pl. 232. 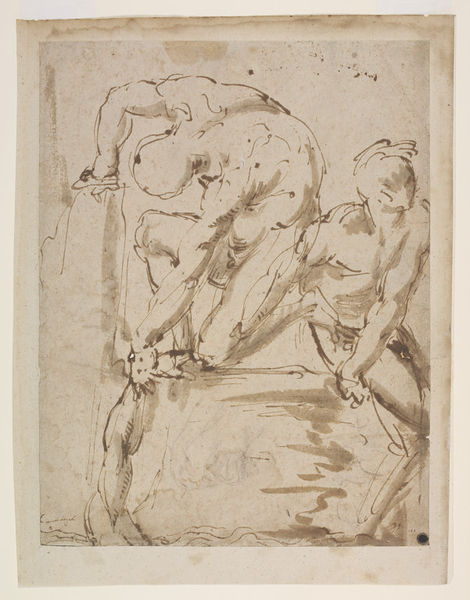