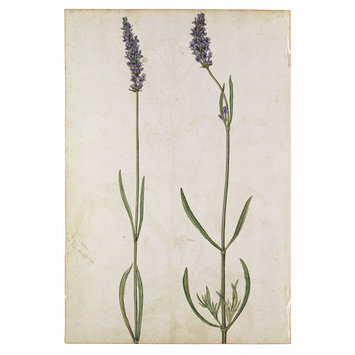 This drawing belongs to an album of 59 botanical watercolours on paper attributed to the Huguenot artist Jacques Lemoyne de Morgues (1533-88). Some of these are double-sided like the present one. Dated around 1575, the present work shows a stavesacre on the recto and lavender on the verso. Although Lemoyne has long been considered as an obscure artist providing designs for simple woodcuts, his botanical watercolours which were rediscovered at the beginning of the 20th century have earned him a place in history as one of the most remarkable early botanical painters.

A stasacre on the recto: the open flowers are grey-blue paling at the tips, the stamens yellowish, while the half open flower is greenish white touched with blue, the buds pale green; and lavender on the verso: the florets are grey-blue showing the brown bracts between the whorl of florets.

Watercolour and bodycolour on paper

Purchased in 1856 as part of a sketchbook bought for its 16th-century binding. In 1922, De Morgues's signature was discovered and the significance of the watercolours recognised. Following this, the 34 leaves with watercolours were extracted from the volume to be transferred to the Prints and Drawings department (now Museum nos. A.M.3267a – 3267hh-1856). The binding remained in the library (National Art Library, 3267-1856).

The present drawing belongs to an album of 59 botanical watercolours depicted on 34 sheets of paper and attributed to Jacques Lemoyne de Morgues. The present sheet is double-sided. On the recto is depicted a wild daffodil and a red admiral butterfly whereas on the verso is represented a pear on a twig and a halved pear.

The drawings from this series were acquired in 1856 as one of the first purchases of the V&A, almost by accident, and solely because they were bound up in an extremely fine French late-16th-century brown calf binding. Although Lemoyne has been long considered as an obscure artist providing designs for simple woodcuts, he was recognised at the beginning of the 20th century as one of the most remarkable early botanical painters.

The V&A binding and the inscriptions on the drawings in both French and Latin suggest that the series was probably made in France around 1575. Lemoyne left the Continent to London where he settled shortly before1580. The V&A album can be compared with another album, reputed to have been made around 1585 in England, and now in the British Museum.

The interest in plants for their medicinal properties and religious symbolism was well anchored since the Middle Ages in Western Europe. A great number of manuscripts were beautifully illuminated with flowers and plants, echoing an interest that goes back to the Antiquity. However this impressive album of botanical watercolours shows a renewed curiosity for the flora from both a scientific and an aesthetic point of view.

Watercolour, a stavesacre on the recto and lavender on the verso, attributed to Jacques Lemoyne de Morgues, French school, ca. 1575

Palmated Larkspur (Stavesacre), Delphinium staphisagria L. The open flowers are grey-blue paling at the tips, the stamens yellowish, while the half open flower is greenish white touched with blue, the buds pale green.

Lavender, Lavandula officinalis Chaix (L. vera DC.). The florets are grey-blue showing the brown bracts between the whorl of florets.

Double Daisy, Bellis perennis L., var. hortensis L. The flowers are pink, deeper towards the yellowish centre. The Painted Lady Butterfly, Vanessa cardui (L.), seen from beneath. The wings are mottled in brown and white, deeper brown on the forward edges, the body is dark grey.

Inscribed above the butterfly, The painted Lady revers’d and numbered 3. 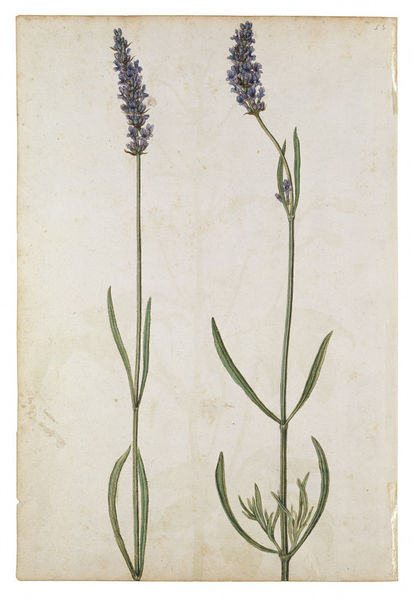