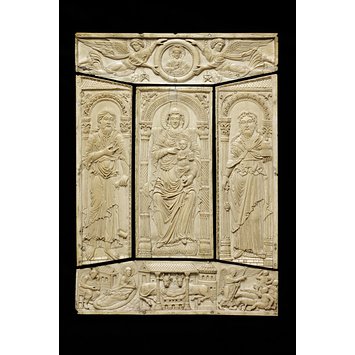 Front cover of the Lorsch Gospels

These five ivory panels comprise the front of one of the largest and most splendid of Carolingian book covers to have survived. The Carolingian court of the Emperor Charlemagne valued learning and culture and as a Christian court, prized the Bible and Gospels above all other works. Manuscripts, especially the Gospels of the New Testament were frequently embellished with illumination and ornate book covers; such decoration was intended to glorify the text within. The book to which these panels were attached was held at the Imperial abbey of Lorsch from where the name of the object derives. It was first mentioned in the library catalogue of the monastery in about 860.

The central panel depicts the Virgin and Child enthroned, with St John on the left and the prophet Zacharias on the right. In the medallion above, the figure of Christ appears in a roundel supported by two angels, his right hand is raised to deliver a blessing. The bottom panel shows the Nativity and the Annunciation. The back cover is now in the Vatican Museums in Rome.

In the centre panel is the Virgin enthroned holding the seated Child on her left arm. In the side panels stand figures of saints, on the left St John the Baptist, on the right Zacharias holding a censer in his right hand and an incense box in his left. Each figure is represented beneath a round arch supported on fluted columns. In the topmost panel flying angels support a medallion with a bust of Christ; in the bottom panel is th Nativity, with, on the right, the Message to the Shepherds.

This frame is associated with the ivories which formed part of the front cover of an early ninth-century copy of the Gospels from Lorsch abbey. The back cover, now in the Vatican, shows Christ treading the beast between two archangels, with two flying angels above holding a medaillon with a cross, and below, the Magi before Herod and the Adoration of the Magi. From the Webb collection, previously in the Leven collection, Cologne, and Soltykoff in Paris.
The Lorsch Gospelbook was first mentioned in the library catalogue of the Lorsch monastery in about 860 as 'euangelium pictum, cum auro scriptum, habens tabulas eburneas'. It was then mentioned in 1479, when the book was re-bound and probably divided. One part came together with the library from Lorsch monastery to the library of the court and the university of Heidelberg in 1556, which was looted and donated to the Pope in 1622/23. The other part of the gospelbook ended up in Alba Julia in Romania, while the the present ivory which was attached to it found its way into the collection of Peter Leven in Cologne.

Historical significance: This frame is associated with the largest and most splendid of Carolingian bookcovers to have survived. It is also a telling example of the achievements of the Carolingian court to revive the classical past not only in architecture, but also in the production of precious goldsmithworks, illuminated manuscripts, and ivory carving.

This frame is associated with the ivories which are part of one of the major representatives of the so-called 'Court School' of Charlemagne.Carolingian art looked not only to the past imperial traditions of Rome but also to the more nearly contemporary imperial tradition of the East. This piece would seem to have been based on a sixth-centuryConstantinopolitan imperial diptych, formed of five panels, such as the Barberini diptych in the Louvre. A stylistic comparison can be made with surviving sixth works such sa the throne of Maximianus (Archbishop of Ravenna, 545-53) in Ravenna. The book cover is, of course, even closer to the major illuminated manuscrips of Charlemagne's Court school -plumfaces staring eyes, scalloped haloes, the lon curved fingers, and the decorative arcades - and it seems that illuminators and carvers used identical models. 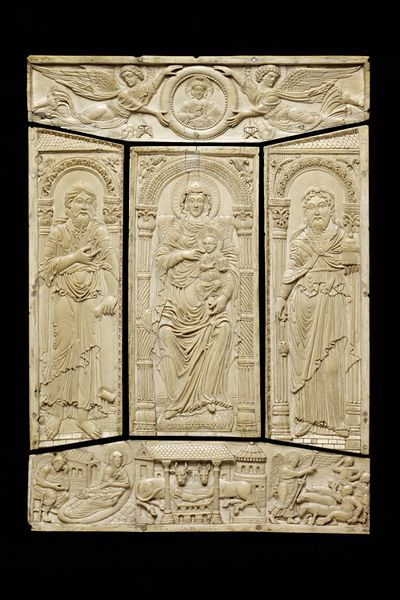