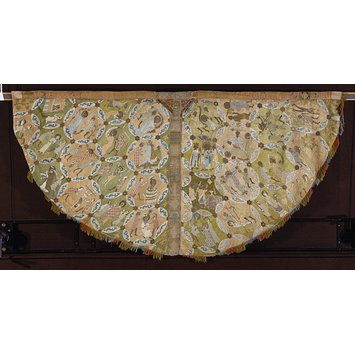 This cope has a fascinating, albeit gruesome, depiction of saints undergoing various forms of martyrdom. All sorts of infamous medieval torture methods are represented such as flaying (of St Bartholomew), roasting (of St Lawrence), several crucifixions (among others St Peter), variations of stabbings, clubbings and beheadings (most famously St Thomas Becket).

Each saint is within a roundel. These roundels intersect with each other so as to form six-pointed star shapes, separated by spaces between the points of oval shape. In these small spaces there are blue dragons with red wings and at each point of the star shape are appliqued golden rosettes. Embroidery in polychrome silks and couched gold thread, entirely covers the linen background. Compared with known examples of contemporary Opus Anglicanum, this German work is rather naive and not as finely executed.

In the later 19th century the cope was in the collection of a Bishop of Hildesheim who had an interest in medieval art.

Cope of canvas embroidered with coloured silks in short brick stitches. The design consists of a series of circles intersecting one another so as to form six pointed star shapes separated by spaces between the points, of oval shuttle shape. In these small spaces there are blue dragons with red wings. At the points of the star shapes are appliqued rosettes in couched gold thread - some are missing and reveal the drawing beneath which offered the embroiderer an outline from which to work. The metal thread used for the rosettes is not such good quality as that used for the haloes of the saints as it has corroded more. The star shapes are alternately filled in with red and green grounds, and each contains figures of saints undergoing various forms of martyrdom. They may be identified via their attributes or form of martyrdom (following and querying Kroos, 1970), along the straight edge of the cope and then row by row downwards:
Row 1, compartments 1 - 8:
1. martyrdom of a saint in a glowing fire (Christina?)
2. decapitation of a saint
3. decapitation of a saint
4. St Paul
5. St Matthew
6. St Bartholomew (being flayed)
7. St Sebastian (on a cross, pierced by arrows)
8. St Corona

9. decapitation of a bishop saint
10. sawing up of a saint (St Fausta? according to Kroos)
11. St Philip
12. decapitation of an apostle
13. St Peter (crucified upside down)
14. and 15. St Simon and Judas Thaddeus
16. an apostle bludgeoned out with a stick
17. St Catherine (with her wheel)

The cope has been cut about and re-shaped with additions of the orphreys and hood. The orphreys along the front and down the centre of the back are tablet woven in a diaper of red and gold silk with purple and green angular ornaments arranged in rectangular compartments. A small piece of pattern woven textile of metal thread has been inserted at the centre back, above hood. A length of the same textile makes up the middle of a small pointed hood of canvas, with embroidered pieces on each side. Embroidered with red and yellow silks in short stitches with rectangular devices, and edged with tablet woven bands. The border is fringed with coloured silks. Much of silk has disintegrated, thus revealing underlying original drawings of designs. In some areas, the black silk used for the stockings of some of the figures remains, showing just how bold the whole colour scheme originally was. In most cases, the ground fabric is all that is visible. Indeed, the number of 'bare' areas is considerable.

Germany (made)
Saxony (made)

In 1856 this cope was already in Hildesheim Cathedral (ownership not specified); in 1870 it was then recorded in the estate of Eduard Jacob Wedekin (1796-1870), Bishop of Hildesheim (1849-70). Kroos posits that it had come from the collegiate church of St Simon and St Judas in Goslar, Lower Saxony. This church also had relics of St Corona (Kroos, 1970). It was purchased by the V&A from Herr Muller of Hildesheim, through Kusthardt, in 1873 along with nine other objects, including an altar frontal (the Heinigen embroidery, 18-1873) and Cologne orphrey band (19-1873) for £145 16s 8d (all from the Collection of the same bishop).

Historical significance: Professional embroidery workshops probably existed quite early in the Middle Ages to produce these much-prized possessions. More space and a larger workforce were needed for the completion of larger objects such as copes or chasubles.

Technique
Embroidery which makes direct use of the warp and weft threads of linen has a long history; several such techniques seem to have been especially popular in medieval Germany and Switzerland - although not in prominent use in other countries until the end of the Middle Ages. Cross-stitch and counted-thread embroidery, such as brick stitch used in this cope, are quickly mastered and produced effective ornament in a fairly short period of time, covering the ground of the work much more rapidly than the finer, more painstaking, needlepainting techniques as used in contemporary opus anglicanum. Vestments and large hangings worked in brick-stitch seem to have been especially common in Germany. Surface couching found in this cope is simpler compared to underside couching, the latter which had a far greater degree of flexibility and its method of drawing the gold thread into the body of the ground offered the thread greater protection from wear.

Imagery
The martyrdom of each saint is graphically and gruesomely presented and in some cases allows identification of the saint in question. The attributes of the better known saints are clear, some of the lesser known have been identified by Kroos, and some remain to be discovered. Apart from the apostles, many are martyrs of the early church. The main forms of martyrdom seem to be: decapitation, roasting (on a gridiron, in an oven, in a vat on a fire), crucifixion (different varieties), bludgeoning, sawing and flaying. Torture is explicit in some images as well as the actual form of death.

The representation of 'goodies' and 'baddies' is clear: the saints all have haloes, and are either dressed in long flowing robes or are naked; their persecutors wear short tunics, revealing their legs and brandish a variety of instruments of torture (often they wear striped stockings - a sign of evil in medieval iconography. See the Marnhull orphrey (an English embroidery of about the same period) for a similar use of stripes, T.31-1936). The use of patterning (notably swastikas) on some of the garments is notable and worthy of further research. It contrasts with the attempt at depicting drapery in folds on contemporary English embroideries. The differentiation between high status and low status garments dates back to Roman times when the tunic was worn for work and the toga was the sign of the patrician elite.

Saints (lesser known), taken from www.catholic.org/saints [accessed 19/07/2007], unless otherwise stated.
St Blaise. Very few facts are known about Saint Blaise. It is thought that he was a bishop of Sebastea in Armenia who was martyred under the reign of Licinius in the early fourth century. He is the patron saint of wild animals because of his care for them and of those with throat maladies because he removed a fish bone from the throat of a woman who came to him in distress.
St Christina. Daughter of a rich and powerful magistrate who was deep in the practices of paganism, had a number of golden idols. His young daughter broke them, then distributed the pieces among the poor. Infuriated by this act, Urban became the persecutor of his own daughter. He had her whipped with rods and thrown into a dungeon, and her body torn by iron hooks, then fastened to a rack beneath which a fire was kindled; a heavy stone was attached to her neck, she was thrown into the lake of Bolsena, but was rescued by an Angel. Her father's successors continued the persecution. She survived a raging furnace, after remaining in it for five days [this is how she is depicted on the cope]. Serpents and vipers thrown into her prison did not touch her, her tongue was cut out.When she was pierced with arrows, she gained the martyr’s crown at Tyro, a city which formerly stood on an island in the lake of Bolsena in Italy (Source: Les Petits Bollandistes: Vies des Saints, by Msgr. Paul Guérin (Bloud et Barral: Paris, 1882), Vol. 9).
St Corona (wife of St Victor). Husband and wife and martyrs.They were put to death in Syria during the reign of Marcus Aurelius. Their Acts are considered highly unreliable.
St Cyriacus. Bishop of Ancona, Italy, or bishop of Jerusalem, Israel, also called Quiriacus. He is believed to have been the bishop of Ancona. While making a pilgrimage to the Holy Land, Cyriacus was caught up in the persecution of the times. Yet another tradition states that he was the bishop of Jerusalem, martyred under Emperor Hadrian.
St Dionysius. Martyr and uncle of St. Pancras. Asian by birth, Dionysius brought St. Pancras to Rome, where they became Christians. Dionysius died in a Roman prison.
St Fausta. Fausta was martyred between 305 AD - 311 AD. When the judge threatened Fausta with severe tortures, she asked him to make her an icon with the depictions of all those tortures with which he threatened her. When the icon was completed, it was shown to her and St. Fausta said: 'As this icon does not feel any pain, so my body does not feel any pain from your punishments, for my soul is secure in the Lord.' The judge then threw her into a vat of boiling hot water where she died. (www.orthodox.cn/prologue/February6.htm [accessed 19/07/2007]).

Place of origin
Goslar is a historic town in Lower Saxony, Germany. It is the administrative centre of the district of Goslar and located on the northwestern slopes of the Harz hills. Goslar and the mines are UNESCO World Heritage Sites. Salian Emperor Henry I founded the town in the 10th century after the discovery of silver deposits in the nearby Rammelsberg. The wealth derived from silver mining brought Goslar the status of an Imperial City, which attracted the interest of the Holy Roman Emperor. The Mediæval Imperial Palace of Goslar (Kaiserpfalz) was built in the 11th century and became a summer residence for the emperors, especially Henry III of Germany who is buried there. Goslar's medieval cathedral was build at the same time as the medieval Imperial Palace (only the porch survives) (wikipedia entry [accessed 19/07/2007]).

Attribution note: Most vestments were made to commission for a particular church or clergyman. 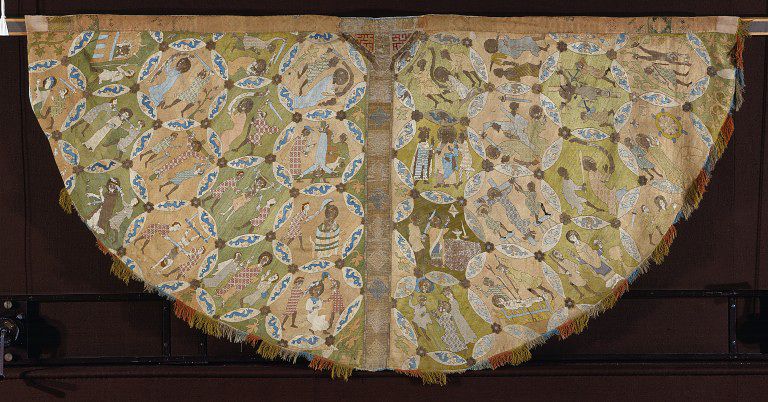