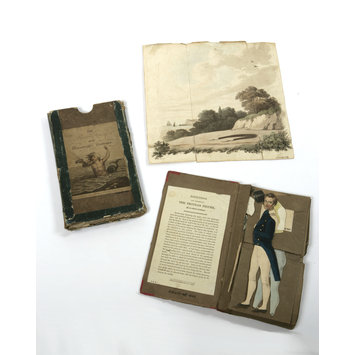 The Protean Figure and Metamorphic Costumes

Cut-out pasteboard figure of a man in shirt and breeches, together with an engraved landscape, and twelve costumes and accessories in eighty-two pieces, contained in a volume consisting of twelve folders of brown paper, each with the title of the costume. The costumes are as follows: walking dress, mourning suit, Turkish costume, Quaker's habit, officer's uniform (land habit), full dress in the year 1700, monk's habit, naval uniform, German hussar, knight in full armour, gentlemen's evening costume, French uniform (Imperial guard).

Inside the front cover is mounted a sheet of directions. In a slip case with an engraved pictorial label.

DIRECTIONS
FOR EXHIBITING
THE PROTEAN FIGURE
In its different costumes,

After duly flattening the paper with the landscape, place the pasteboard figure on it, so that the heels fill up the space left for them in the shaded parts of the gravel-walk, and the head touch the bird at the top of the sky; or should a sheet of plain white paper or pasteboard be preferred, on account of its superior flatness, the Figure may equally well be exhibited in that manner. The order in which every piece of any particular Costume is to be laid on will easily be understood, by attending to the simple rule of putting on every article in the same succession as is observed in the male toilette, such as stockings first, smallclothes next, boots or shoes, then cravat, waistcoat, and lastly the coat; for it is natural that any piece of dress, part of which has to be covered by another, must lay under that. A light finger, occasionally assited by the point of a pencil-stick, or pen-knife, will not fail in adpating every part most nicely to the pasteboard model. Some of the coats and other dresses will be found slit through, in order to admit the insertion of a cane, an opera hat under the arm, a firelock, &c. which latter must be passed through the sleeve by the but-end [sic]. Some of the swords are likewise detached, and must be introduced into the belt affixed to the coats previously to the latter being laid on. Should any of the pieces be ever a little warped by undue pressure, it be easy to smooth them with the fingers, so as to lie close to the model.

Directions for use, as printed inside the cover of the volume. 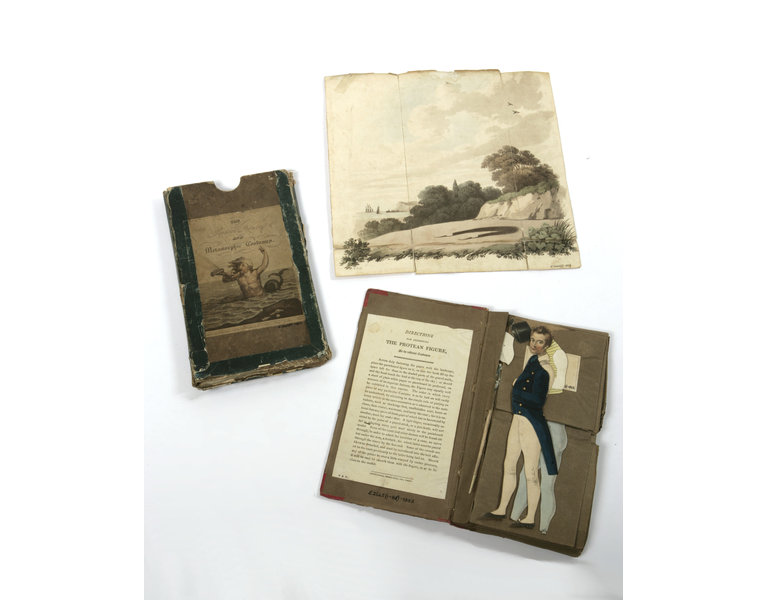