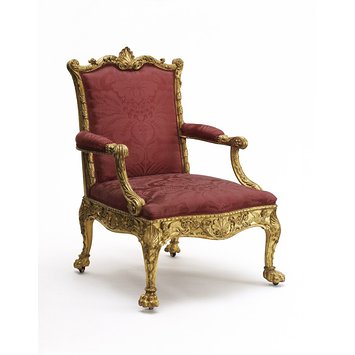 Object Type
This chair was originally part of a set of eight armchairs and four sofas commissioned for the grandest room for entertaining in a great London house. As the most important seating furniture in the house, it was designed by the architect responsible for the alterations and decoration of the house, Robert Adam (1728-1792). The chair's legs have castors (small wheels), thus it could easily be moved into the required place for group conversation.

Design & Designing
Adam's watercolour design for one of the sofas is dated 1764 and preserved in Sir John Soane's Museum, London. The design - inscribed 'Sopha chairs for the Salon' - cost Sir Lawrence Dundas £5. It is the only example to survive of an Adam design on paper that was executed by Chippendale.

Materials & Making
The supplier, Thomas Chippendale (1718-1779), charged œ20 for each chair. His bill described the chairs as 'exceedingly Richly Carv'd in the Antick manner and Gilt in oil Gold Stuff'd and cover'd with your own Damask and strong Castors on the feet'. Dundas, who patronised both Chippendale and Adam on a number of occasions, provided the silk damask fabric for the top covers. The use of oil gold is curious. It was cheaper than water gilding, because it could not take burnishing. But it provided a more consistent appearance, since it did not result in contrasting matt and burnished areas, so characteristic of water gilding.

The chair is inscribed with a chisel on the front rail 'VII' indicating that it is number seven from a set of eight armchairs and four sofas for the Great Room at 19 Arlington Street.

'VII'
The chair is inscribed with a chisel on the front rail.; inscribed

Sold Christie's 26 April 1934, lot .., from the collection of the Marquess of Zetland. The set was purchased by the collector Ronal Tree and later dispersed.
Purchased January 1937 from Messrs Moss Harris & Sons, 44 New Oxford Street, London WC1 for £100 (Nominal File MA/1/H857, Harris M. Sons). At the time the Museum was planning to show its best Adam furniture under the newly acquired ceiling from the Adelphi (W.43-1936), and rightly considered that this would be a very significant addition to that group of objects.

In the early days of Neo-classicism the style was often combined with earlier styles. While the decoration of this chair is Neo-classical, its overall form has the curved shapes of the earlier Rococo style, combined with a back taken from furniture in the Palladian style.

Sir Lawrence Dundas was the son of an Edinburgh woollen-draper. Described by his contemporary, the writer James Boswell as a 'shrewd man of the world', Dundas made a fortune as merchant contractor to the army. He employed Robert Adam to redecorate the interiors of his London house in Arlington Street, and his country house, Moor Park in Hertfordshire. Other leading London furniture makers supplied furniture for these interiors.

ARMCHAIR
ENGLISH; about 1765
Gilded beechwood
Designed by Robert Adam for the 'salon' of Sir Lawrence Dundas' house at 19, Arlington Street, London. One of '8 large Arm Chairs exeeding richly carved in the Antick manner and gilt in oil Gold stuffed and covr'd with your own damask and strong Castors on the feet' for which Thomas Chippendale charged £160 in July 1765. [pre October 2000]
4. Armchair
Britain (London); 1765
Designed by Robert Adam (1728-92) and made by Thomas Chippendale (1718-
79) for the 'Great Room' of the London house of Sir Lawrence Dundas (1710?-81) at 19 Arlington Street, London
Gilded beech and walnut; modern upholstery; from a set of eight chairs and four sofas.

This chair is part of the only known set of furniture made by Chippendale to Adam's design (the design is in Sir John Soane's Museum, London). Chippendale usually worked to his own designs. [1996] 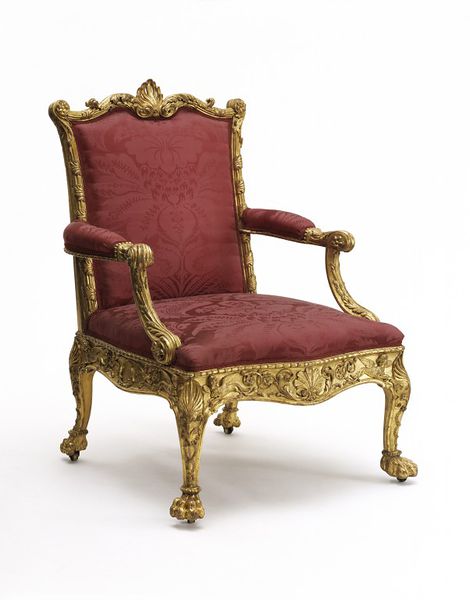