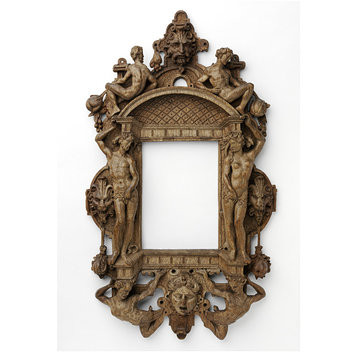 Close-grained wood like lime-wood is most often used for fine carving, but this frame is unusual in that it is made of oak. Oak is not considered to be easy to carve because of the inconsistency of the grain and the fibrousness of the wood. For this reason, this Flemish frame is a particularly virtuoso example of carving in the Mannerist style. Elements derived from architecture (like the semi-circular pediment) have been combined with lion masks, fruit, leaves and the figures of Adam and Eve, to form a sophisticated composition. The elongated nude figures of Adam and Eve are associated with vanity and self-consciousness, harking back to the biblical story and the moment when, having eaten of the fruit of the Tree of Knowledge in the Garden of Eden, they first became aware that they were naked.

It appears that the whole frame has lost its original finish. The fragments of ground, paint and gilding on the coffered niche suggest that the frame was painted and gilded. The ceiling of the coffered vault was possibly painted blue with details in gold to represent a celestial ceiling. The combination of colour and gold together with the intricate nature of the carving would have given this frame a highly decorative finish.

Structure
The frame is largely carved from one piece of oak with vertical grain direction. The following, also made of oak, have all been applied separately: the top cresting, the fruit drops by the feet of the reclining figures at the top, the outer edges of the lions at the sides, the fruit drop on the right below the lion, the protruding arms on each of the figures in the antependium and the pendant moulding below the mask at the base. The grain direction on the fruit drops at the top and the arms runs at a different direction. At the base on the figures, there are joins below the knee and through the calves and drapery. These are not visible at the back. The cresting has been extremely skilfully applied, lapped on at the back and very carefully joined through the intricately carved beard at the front. The side pieces are also beautifully closely joined.

Description of Ornament
Adam and Eve, standing at the aperture of the perspectival aedicule, support, with outstretched arms, a generalised Doric entablature which carries a segmental arch and coffered vaulting decorated with lozenges. The serpent appears behind Eve’s head proffering an apple. Above the vault are what appear to be the same figures of Adam and Eve. At the top centre is a mask, set on a cruciform support hung with fruit at either side. The antependium is formed by a central female mask with a tiny lion head carved within the hair. The mask is flanked by two diabolical figures with sinister expressions. The figure on the left has spiralling horns and that on the right, pointed ears. Lion heads protrude from either side with drops of fruit hanging from their strap work support.

Decorative Finish
The frame, as it appears today, is unpainted. Closer inspection shows traces of a white ground, for example, in the recesses of the figures’ hair. Various fragments of dark blue over a white ground were seen, particularly in the coffered ceiling. A small fragment of gold can be seen at the very top point of the frame.

Hanging Device
There is a housing, recessed area cut out, behind each of the figures at the base of the frame, at the bottom left and right. These are possibly for supports by which the frame was fixed into a more extensive wooden structure. The frame would probably not have been displayed alone but possibly on a stand with other objects surrounding it. (Olaf Lemke, personal communication, February 2008). There are two pierced strips of wood adjacent to each of the figures’ heads at the top. These could have been grafted on at a later date and were probably added as a means to hang what was then treated as an independent frame. There are two large screw holes above and below a hanging hole through the top mask, and several other later fixing holes.

Bought for £20. No other information on papers.

The composition of this frame, with its elegant figures in balanced poses, masks, fruit and strapwork, is typical of the Mannerist style. Its design may have been inspired by the title page of a book.

Conclusion and Observations (taken from Powell and Allen, 2010)

The frame may have contained a mirror or painting. It is possible that the piece of wood available to the carver was not quite large enough to incorporate all the carved protruding elements and that the top part and the sides were added separately at the time of manufacture. Alternatively, some of these added parts may be extremely well executed replacements of lost carving, particularly at the top and bottom. This is supported by the fact that, for example, the punch work on the background of the bottom piece looks slightly different. The top and bottom pieces here are of thin section and would have been more prone to breakage. It is less likely, however, that breakage would have occurred through each of the lions as these would not have been particularly weak areas.

The protruding arms on each of the figures in the antependium are possibly replacements. The modelling looks as if these could possibly have been carved by a different hand. On these same figures the carving to the inside of the joins is strangely formed. There is a step at the join in the legs and the rest of the leg is of an amorphous form, with no foot. On the right, the carved lines dividing the drapery do not run smoothly through the join and a detail of veining on the bottom part of the drapery is missing. This seems to suggest later carving of these parts. These are either later additions for missing parts or, alternatively, could be areas where there was damage and loss to the original carving which has been smoothed and partially re-carved to disguise the damage.

It appears that the whole frame has been stripped and the remaining traces of paint are unfortunately not substantial enough to establish exactly how it originally appeared. The fragments of ground, paint and gilding on the coffered niche suggest that the frame may have been painted and gilded. The ceiling of the coffered vault was possibly painted blue with lines and dots picked out in gold to represent a celestial ceiling (Tim Miller, personal communication, February 2008). The combination of colour and gold together with the intricate nature of the carving would have given the frame a highly decorative appearance.

Comparable Frames
None found; however, the anatomy of the figures may derive ultimately from those of Day, Night, Dusk and Dawn on Michelangelo’s tomb of Lorenzo de’ Medici in the Sistine Chapel. The coffered vaulting of lozenge shapes loosely recalls that of the vaulted ceiling of The Temple of Venus and Rome in Rome and the ceiling in Santa Maria della Consolazione also in Rome. It also strongly evokes the chapel vault at the Château d'Anet by Philibert De l‘Orme (1552). The carver may well have been familiar with Androuet de Cerceau’s Les Plus Excellents Bâtiments de France (1576-9, Paris), with prints showing this castle. There are also similarities with figures sculpted by Bartolomeo Ammanati (1511-1592) for example Leda with the swan, in marble, at the Museo Nazionale del Bargello, Florence, Italy.

Frame, oak carved with elongated figures of Adam and Eve with figures, fruit and architectural elements 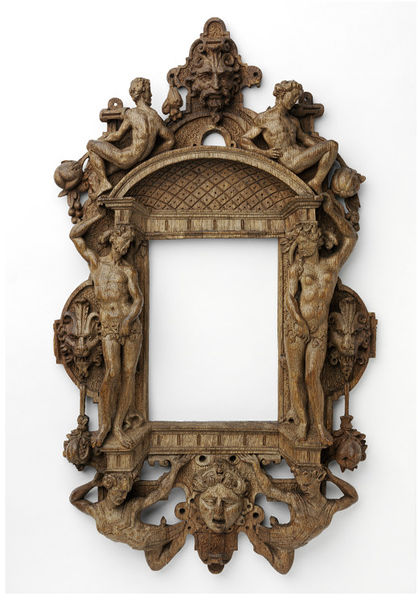