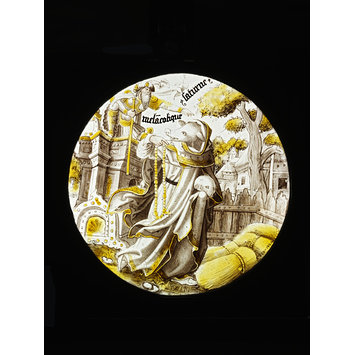 The imagery on this roundel is quite complex and the original design source has yet to be identified. The roundel is composed of a single piece of clear glass which is painted on the front with a dark pigment and then highlighted with silver (yellow) stain on the back. This construction and the style of painting points to a glass painting workshop in the Netherlands in the early decades of the 16th century. However, the design source for this image may be French as the words for 'Saturn' and for 'Melancholy' are in French rather than in Latin.

Saturn is depicted as an elderly man wearing a classical Roman armoured uniform and carrying a scythe. Melancholy is seen here, rather humorously, as a pig dressed as a monk. Throughout the Middle Ages, monks were often the brunt of jokes and in the late 15th and early 16th centuries these jokes often manifested themselves in violent attacks against monastic properties and monks themselves.

Since the time of the Roman physician, Galen, it was believed that the human body was governed by what was known as 'humours'. There are four humours and a healthy body is one that has an equal balance of these. Disease and disability were caused by an imbalance in the humours. An overabundance of the humour 'black bile' resulted in the condition of melancholy. It was also believed that the planets had an effect on the balance of humours. Saturn was linked with the melancholic state.

Saturn was also associated with undesirable elements in human society. In the 16th century, numerous woodcuts were produced depicting 'Saturn's Children'. These children of Saturn were portrayed as agricultural labourers, criminals, the poor and the sick. Additionally, the slaughtering of pigs accompany these scenes as the pig was considered an unclean and odorous animal. The pig was also often, but not exclusively, coupled with the melancholic state.

At the time this roundel was produced, Europe was undergoing religious and political turmoils which became known as the Protestant Reformation. It is possible to see the imagery here as being 'protestant' propaganda directed against monasticism but it is not conclusive.

Painted in grisaille and yellow (silver) stain. The subject represents a monk with a swine's head, carrying a string of beads and a skull. He is fleeing from a building on the left. On the roof of the building there is an old man with a staff. He is driving the monk away with his staff. On the right there is a village, trees and sheaves of corn.

The imagery on this roundel is not fully understood.

Judensau:
Since the 13th century anti-semitic images depicting Jews suckling a sow have appeared. on sculptured corbels and capitals, in wall paintings and reproduced in woodcut illustrations. At the end of the 15th century, probably as a result of the murder of a child in 1475 in the Tirolian city of Trent, numerous anti-semitic engravings were produced. The imagery was similar on all the engravings and were reproduced in the same form into the 18th century. The imagery depicts a Jew sitting astride a sow or boar conversing with another Jew depicted as the devil. Other Jews are engaged in suckling the pig and eating its excrement. A Jewess sits astride a goat in the background.
Swine:
The Jewish prohibition against eating pork had set them apart from Christians who came to resent the Jewish view that the pig was an unclean animal and hence those who ate pork were unclean themselves.
Writings in the Old Testament book of Leviticus state that an animal is kosher, and therefore edible, if it both chews its cud and has cloven hoofs. Swine have cloven hoofs but they do not chew their cud. Swine therefore also became a symbol of hypocrisy.
The Koran also contains text forbidding the consumption of pork. This shared prohibition between practitioners of the Jewish and Islamic faiths served, in the late medieval period, to provide fuel for anti-semitic criticisms. This was a time when Western Europe was threatened by Ottoman Turkish expansion.
Saturn and Jews:
Die Kinder des Planeten Saturn, 7 woodcuts producted c.1531 by Hans Sebald Beham or Georg Pencz.
Image of a Jew wearing a cowl (has ring on cloak) talking to an offender in the stocks. In the forefront, a farmer slaughters swine.
Woodcut from the Almanach of the Nuremberg printer Peter Wagner, 1492:
Saturn depicting as a Jew swallowing children. Assume that the association of planetary Saturn with disaster is transferred to the person of the Jew.

Skull:
Images of the Old and New Covenants - Ecclesia and Synagogue -
Images of Eve, naked, holding the apple which is presented to her by the serpent and offering a skull to Jews. Figure is contrasted with that of Mary.
Have this imagery of the New Covenant represented by Mary and that of the Old represented by just the skull - flanking figure of Christ on the Cross.

Notes on Melancholy:
In ancient Greek medicine, Saturn was identified with the humour of 'melancholia'. It was perceived as a form of madness. The medieval belief that the body was controlled by four humours stems from the medical writings of the Greeks, such as those of Hippocrates.

In the post medieval period, 'melancholia' is sometimes depicted as 'Saturnine', thought to be the daughter of Saturn. She is often surrounded by books and carries a skull which suggests the vanity of her efforts.

In Humanist thought, 'melancholia' was identified with the introspective, intelligent and contemplative man.

Four Temperaments: Body contained four kinds of fluids, or humours, which determined a man’s temperament according to their relative preponderance. The organs that secreted them were subject to planetary influences.
As a series, they are personified in 15th century Books of Hours but are rare in the Renaissance.
Melancholy was the one most discussed in the Middle Ages and in the Renaissance.
Melancholy was considered to be the daughter of Saturn. To the humanists Melancholy was identified more with the introspective, intellectual qualities that typified their ideal ‘contemplative man’. Artists, philosophers and theologians were all regarded as coming under the influence of Saturn.

The figure of Melancholy may have wings, and the animal beside her is generally not a pig but a dog.
In baroque painting she has a skull which suggest the vanity of her efforts.

Notes on Saturn:
Saturnius: a son of Saturn (surname of Jupiter, Neptune and Pluto)
Saturnia: daughter of Saturn (surname of Juna and Vesta)
Saturnus: a mythical king of Italy to whom was acribed the introduction of agrigulture and the habits of civilised life in general.
The Roman identified Saturnus with the greek Cronus, so was the father of Jupiter, Neptune, Pluto, Juno, etc.
Myth: Saturn came to Italy in the reign of Janus. He formed a settlement on the Capitoline Hill (hence known as Saturnian Hill). There was later a temple of Saturn at the foot of that hill.
Saturn taught the people agriculture and suppressed their savage way of life. Considered to be the golden age of Italy. Saturn then was removed to the abode of the gods.

Notes on Father Time:
Father Time: generally nude except for a loin cloth, winged, carries scythe and hour glass. May have a crutch and sometimes a snake with a tail in its mouth.
Classical personification of Time did not bear the above attributes. Greeks confused chronos (‘time’) with the old god of agriculture, Cronus, who had a sickle for an attribute.
The Romans identified Cronus with Saturn who also was a god of agriculture and carried a scythe.

Notes on Anti-Clerical feeling:
From the beginning, monks were regarded as Luther’s chief opponents, and early propaganda for the evangelical movement was directed largely against the institution of monasticism. The humanists had already waged an energetic campaign against monasticism.
Drunkeness and gluttony were held to be typical vices of monks from the medieval period onwards.
(1523) new wave of pessant unrest broke out. Was directed largely against the privileges of the clergy.
The hog is representative of the demon of sensuality and gluttony.

Notes on Costume:
The central figure wears a caputium which includes the hood and the tippet or cape. The hood was orginally worn as a head covering but was later dropped back upon the shoulders.

Roundel, clear glass panel with pained details and yellow (silver) stain. Depicting a sow in a monk's habit identified as 'Melancholy' being banished by a figure of an elderly man wielding a scythe and identified as 'Saturn'. Made in the Netherlands, about 1530. 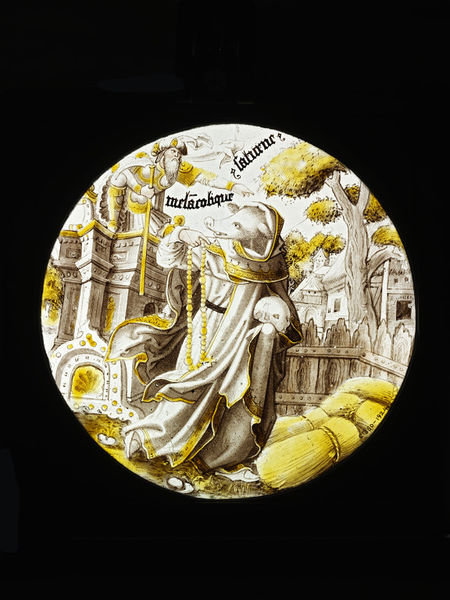