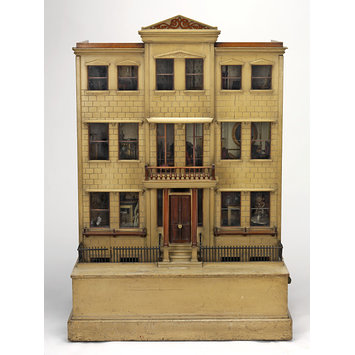 This house is known as the Henriques House because it was bequeathed to the museum by Lady Henriques. It is a model of a typical Kensington or Belgravia town house, found in long rows of elegant terraces. This house was made in the 18th century but we do not know whether it was made for a child or an adult. Most of the contents were left to another collection and as a result the house is quite sparsely furnished.

This is a model of a large townhouse with four storeys, the basement being below pavement level. The front has been carved to represent bricks. The back and sides are plain. The roof is flat with a pediment above the front central bay. The front façade has three bays. The two outer ones have two sash windows each per floor. The central one has a front door reached by stairs which is flanked by two wooden pi1lars which support a balcony. There are French windows on the first floor. The second floor has two pedimented sash windows. Iron railings surround the front of the house at pavement level. Inside there are nine rooms. The top floor has two bedrooms and a sitting room; the firs floor has a small dining room and large sitting room; the ground floor two further sitting rooms while the basement has a scullery and kitchen. The front façade is winged and padlocked. The house is wallpapered and furnished and all rooms have fireplaces.

“I noticed at Normandy Park, a quite attractive 18th century pedimented dolls’ house with a basement. The furnishing was all Victorian. Do you think that Circulation would like it?”

This house was probably made in the late eighteenth century, and resembles the luxurious townhouses of West London. However, the interior decoration is a mixture of dates and styles.

The house has some quirky features: the stairs lead to nowhere, and all the rooms are slightly different sizes. On the façade, the stonework suddenly stops under the second floor windows. The deep basement inspires subterranean activity, and makes the kitchen feel secretive. There are so many small square rooms that the large drawing room on the first floor, with a balcony, seems especially grand in comparison. It has silk and gilding on the walls.

Lady Beatrice Henriques
The dolls’ house is named after Lady Beatrice Henriques, who left it to the Museum in her will. She was a wealthy woman, who had a large country house in Surrey and a townhouse on Eaton Square, one of the most expensive roads in London. Her husband, Sir Philip Gutterez Henriques, was chairman of Surrey Council and had served in the Treasury department during the First World War.

The dolls’ house was kept at Lady Beatrice’s Surrey house, Normandy Park, in the entrance hall. We don’t know when Beatrice bought it, or was given it. She may even have had it since childhood.

Lady Henriques also had an outstanding collection of at least 100 silver miniatures, dating from 1600 -1800, which went to the Ashmolean Museum in Oxford. They may have been displayed with the dolls’ house.

Lady Beatrice’s family
Lady Henriques was born Beatrice Rachel Faudel Phillips in 1868. She grew up in 29 Gloucester Square, an impressive London townhouse next to Hyde Park. When she was three, Beatrice and her little sister Nellie had two nurses to look after them, as well as the cook, butler and two housemaids who kept the house running.

Beatrice’s father was Sir George Faudel Faudel-Phillips, 1st Baronet. This illustrious title was endowed on him in 1897, after he had served a term as Lord Mayor of London. This was Queen Victoria’s jubilee year, and Sir George oversaw celebrations across the city and hosted the Queen at a thanksgiving service and party. In the same year he raised a million pounds for victims of famine in India, and helped the Jews’ Orphan Asylum celebrate their centenary. In previous decades, Sir George had been president of Bethlem Hospital, Jewish charities and hospitals, and various sporting and cultural associations. He was later an MP for Hertford.Sir George’s father (Beatrice’s grandfather) was Sir Benjamin Samuel Faudel-Phillips, who also served as Lord Mayor of the City in 1866. Sir Benjamin’s achievement was all the more remarkable as he had been the first Jewish man to be elected Councilman of London, and was only the second Jewish man to be Lord Mayor. London in the 1860s was rife with poverty and disease, and Sir Benjamin raised money to fight cholera, as well as supporting charities for visually impaired people. Sir Benjamin also established Faudel, Phillips & Sons, a company which started dealing in tea, and grew to include publishing and finance. They even imported dolls’ houses.

Beatrice would have been familiar with privilege and moved in elite circles in Victorian London. In the 1880s, her family pops up regularly in the diary of Punch cartoonist Linley Sanbourne. He sees Mrs Faudel-Phillips and her daughters at the theatre, at the train station, and riding in Hyde Park.

Married life
During the First World War, Philip acted as Deputy Director-General of munitions finance and Controller of aircraft and explosives finance. In 1918 he became Assistant Financial Secretary in the Ministry of Munitions and was knighted for wartime work. But his son had been killed three years before, on the battlefield in Ypres. He was 20. Lady Beatrice and Sir Philip commissioned a stained glass window in the local church as a memorial to their son.

In the 1920s Sir Philip shifted his attentions to Surrey and became an important member of the County Council. In 1937, he became Chairman, and about the same time Sir Philip and Lady Beatrice moved their London home from Grosvenor Place to 37 Eaton Square. They were both about 70.

Beatrice’s brothers and sisters
If Lady Beatrice had owned the dolls’ house as a child, it may have been shared with her siblings.

Nellie, two years younger than Beatrice, was rumoured at one time to be engaged to the millionaire tea dealer Thomas Lipton. Gossip columnists claimed Nellie was “good looking and said to be bright and clever”.

Lady Beatrice’s brother Benjamin inherited the Baronetcy in 1922, and immediately updated the family home with a fashionable new dining room and grand staircase. But he died five years later, and the title passed on to younger brother Lionel. Sir Lionel Faudel-Phillips had followed the footsteps of his father and grandfather and was active in the government of the City. He was president of Bethlem Hospital, and a trustee of the Wallace Collection in London. 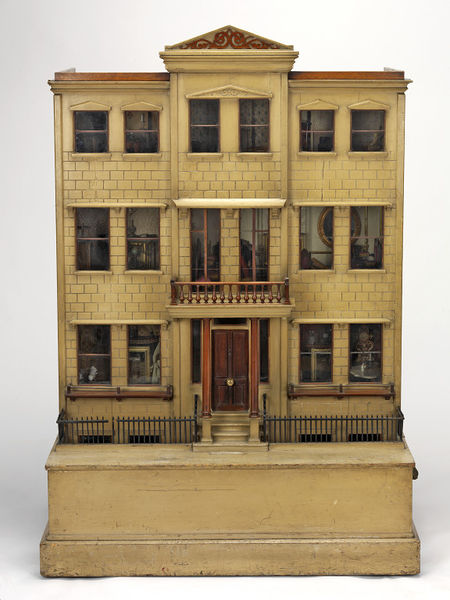