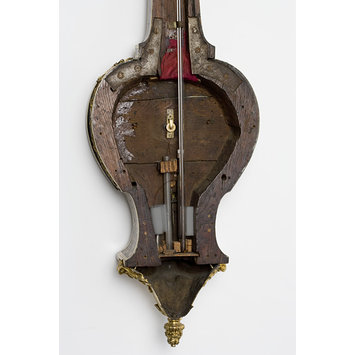 At the end of the 17th century and the beginning of the 18th, the study of sciences was developing fast. Thermometers and barometers hanging in a gentleman's apartment offered elegant evidence of the owner's intellectual interests. This combined instrument was clearly designed for a library or the small, personal rooms known as cabinets in France. Its case is veneered in boulle marquetry, which was highly fashionable at the time and combined ebony with panels of marquetry in tortoiseshell and brass. This type of decoration took its name from Louis XIV's cabinetmaker André-Charles Boulle, although his workshop was by no means the only one to use the technique. The exact dating of this piece remains debateable. Stylistically it would date from about 1710 but recent expert opinion has suggested that it may date as late as the 1730s. Boulle marquetry remained popular, particularly for clock cases and related pieces, and boulle piece were popular with collectors throughout the 18th century. The maker's name (Carcany) on the dial my relate to a restoration of the barometer in the 1770s.

A combined barometer and thermometer, the case veneered in boulle marquetry of turtleshell and brass, and mounted in gilt-brass or lacquered brass, with plaques on the verre églomisé dial (of glass, painted and gilded on the reverse) in white enamel with inscriptions in black. The instrument has an almost circular dial below for the barometer, with the thermometer above, mounted against a tapering obelisk.
The barometer/thermometer shows a shaped, almost circular dial face above a waisted socle, the front of this set with a panel of boulle marquetry in a trellis pattern enclosing rosettes, all in brass inlaid in a ground of turtleshell. The socle is mounted at the base with a large gilt- or lacquered-brass mount of a tapering pendant cast with trellising on the front face below horizontal scrolls and a central mask with flowing hair. The socle and dial are framed with plain mounts, meeting as scrolls at the top, below a pierced rococo mounts with a central cartouche flanked by wings (this probably an addition). The elongated obelish against which the thermometer is set is veneered on the front with plain turtleshell, with plain edge-mounts. A gadrooned capping mount is surmounted by a ribbed knop finial. The brass scale for the thermometer is engraved with numerals, the glass tube for the mercury set in a central recess in the scale. The dial plate in verre églomisé is probably an addition of the late 18th-century (see marks), although the enamel plaques appear to be original.
The piece has clearly been repaired early in its life and metal reinforcing plates are visible on the back.

Oak and walnut veneered with panels of boulle marquetry of tortoiseshell and brass, with mounts of gilt- or lacquered- brass; the dial set with white enamel plaques with inscriptions in black

CARCANY
SUD
SUD EST
EST
In black on the glass dial. Carcany is the name of a barometer maker known to have worked between 1773 and 1780. The other inscriptions allow a moveable arm to record the direction of the wind (south, south-east, east)

PLUVIEUX
CHANGEANT
BEAU TEMPS
Rainy
Changeable
Fine
On three separate plaques set into the dial of the barometer, of white enamel with inscription in black.

Acquired by John Jones before 1882 and bequeathed by him to the Museum in that year. No detailed record of its history before that time remains.

In overall design this barometer it is close to one in the Wallace Collection (see Petre Hughes, The Wallace Collection. Catalogue of Furniture (London: Wallace Collection, 1996), vol. I, pp. 330-333. That piece shows seated figures of Astronomy and Geometry above the dial. A pair of clock and barometer/thermometer similar to the Wallace barometer, from the collection of Lord Overstone, was sold from Lockinge by Christie's, 7 December 1995, lot 40. A 19th-century pair of the same pattern was sold by Christie's, New York, 16 April 1994, lot 103. The Wallace barometer is thought to have been from a design by André-Charles Boulle (1642-1732), cabinet-maker to Louis XIV.

Combined barometer and thermometer,the barometer in a rounded case, below the tall glass of the thermometer. . .The case is veneered with boulle marquetry of brass and turtleshell, with gilt-brass mounts, the plaques of the barometer are of enamel, set against a dial of verre églomisé (glass, gilded and painted on the back). 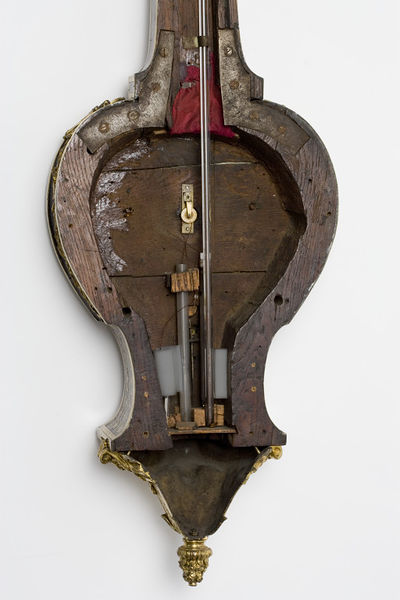