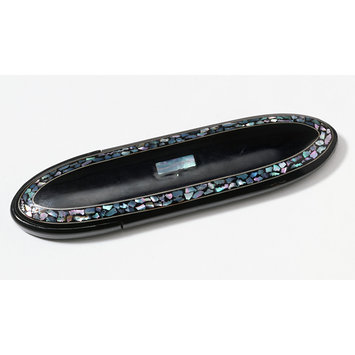 This case for spectacles (reading glasses) was acquired in 1875 for the Museum's 'Animal Products' collection, illustrating the use of mother-of-pearl as a decoration. Mother-of-pearl is the smooth, lustrous interior lining of a variety of shells, particularly pearl oysters, often used for jewellery and decoration. It matches the mirror, Museum Number AP.95-1875.

The Animal Products collection was begun in 1853 at the suggestion of Prince Albert, consort of Queen Victoria. He advised on the formation of the South Kensington Museum and suggested a collection of manufactured items made from natural raw materials, divided into animal, vegetable and mineral categories. In the end the Animal Products collection was the only one of the three to be formed. It was one of the original collections displayed at the branch museum in Bethnal Green, in the East End of London, when it opened in 1872.

Black papier mâché inlaid with a border of mother of pearl. Hinged end.

This formed part of the Animal Products collection which was one of the original collections displayed at Bethnal Green when the Museum opened in 1872. Much of the material came from the Great Exhibition, and the collections continued to be added to until 1917. Less than half of the Animal Products Collection survived by 2000. Half had been transferred to different departments and half remained at Bethnal Green. In 2000 departments at the V&A were offered suitable items. Another quarter of the original collection was trasferred, the remainder was offered to the Archive of Art and Design, at Blythe House, along with the original registers. BGMC kept a small selection of other items for display in conjunction with the History of the Museum information panel. 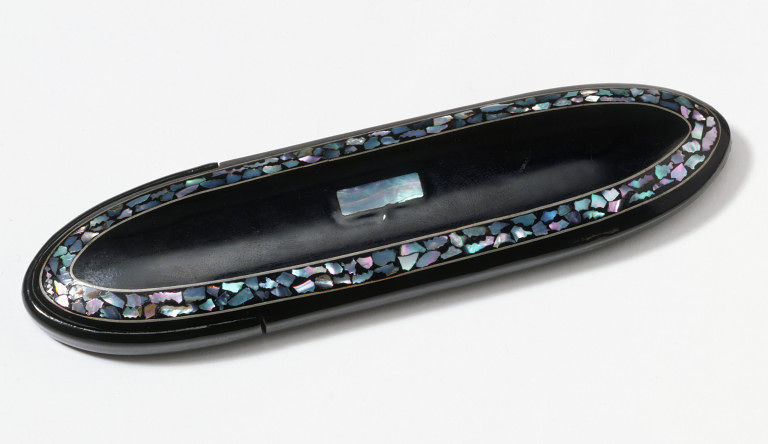