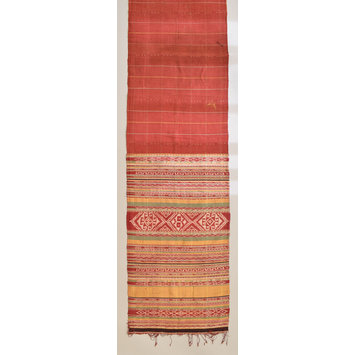 The lower parts woven in coloured silks; the upper in cotton, with a small quantity of silk.

The upper parts have a thin check in yellow, pale-blue, and red and white silks, on a chestnut coloured cotton and silk ground.

The lower parts have many horizontal bands, broad and narrow, decorated with a great variety of geometrically-treated motives including fret, hook, dot, cloud and floral motives, chiefly in white, purple and shades of green, yellow and red.

Silk, cotton, dye, stitching. Woven in plain weave; bands of repeating weft-ikat with a red warp as well as supplementary weft tapestry with little flowers. (Without bands of inter-locking tapestry)

Extract from the donor's letter September 4 1919:
" In 1886 I was present when we occupied the Southern Shan States of Upper Burmah and purchased some cloths in the villages near Fort Stedman, then the headquarters of the South Shan States Administration".

Eleanor Gaudoin, a descendant of the royal family of the Shan State of Hsenwi, on a visit to the V&A Indian Study Rooms in 1995, made the following comments:
"The roots of shan silk or silk/cotton weft-ikat cloths are to be found in the Lanna/Lao Thai territory of northern Thailand. Lana was a tribute nation to Burma for several centuries until its liberation in c.1780. There could have been a migration of weavers during that period. Otherwise weavers may have been brought back with the 90,000 Thai captives after the sack of Ayuthia in 1767.

The most well know of the weft-ikat patterns are:
zin-me (Chiangmai) and Bangkok (a chevron design).

Weaving was done by women within specialist weaving families in the Inle Lake regiion. The skill and patterns, carefully guarded, passed on from mother to daughter.

An agent or `travelling salesman' would then take the finished cloth from court to court or wealthy homes. The silk weft-ikat would not be sold directly at the bazaars.

The cloths would be fashioned into longyi (tubular skirts). A black cotton waistband would be attached to the top. The longyi would be worn with white cotton cross-over jackets fastened with jewelled buttons.

Two parts of a Shan silk and cotton longyi which have become separated chiefly in yellow, pale-blue, red, white, purple and shades of green on a chestnut ground from Inle Lake, Shan States, Burma. In plain weave patterned with weft-ikat and supplementary weft tapestry designs. c. 1885

Made in the neighbourhood of Inle Lake, Yawnshwe State. Mis-identified by C. Stanley-Clarke as luntaya. 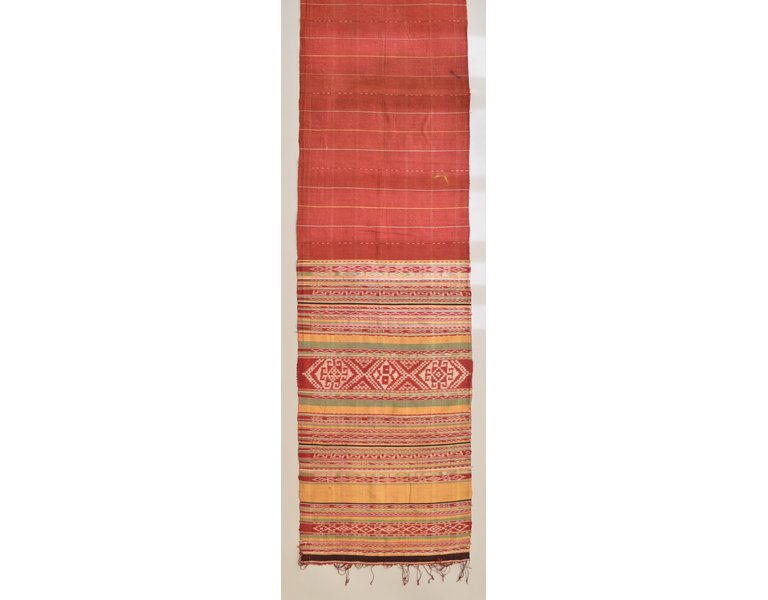