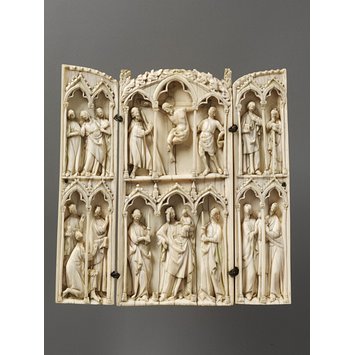 The Crucifixion, the Virgin and Child and Scenes from the Life of Christ

During the 14th century specialist ivory craftsmen carved both secular and religious objects in great numbers. Although Paris was the main centre of production, other workshops emerged in Italy and Germany. Some of the craftsmen may have been trained in Paris as their work often combines French and local styles.
This ivory triptych is possibly Upper Rhenish and made in the first quarter of the fourteenth century.
The Gothic Triptych was to all intents and purposes a sub-branch of the tabernacle polyptych, with a shallower central panel and two, rather than four, hinged wings. The subject matter was the same, dominated by single images of the standing Virgin and Child and scenes from the infancy of Christ. Triptychs – like diptychs – are better suited to the needs of a travelling clientele, who would wish to take these small portable altars with them as aids to prayer. Some of them were intended to be carried in cases, usually of cuir bouilli (boiled leather).

In the upper part is Christ on the Cross between Longinus and a soldier bearing vinegar. On the wings are the Virgin supported by the two Maries and St John the Evangelist and Joseph of Arimathea. In the lower part the Virgin with Christ Child on her arm, standing between angels. On the wings are the three Magi in adoration, and the Presentation in the temple.

From the Salting collection. Salting Bequest in 1910. 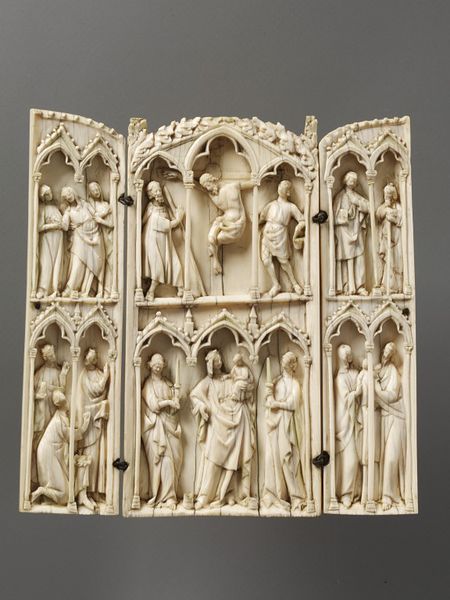