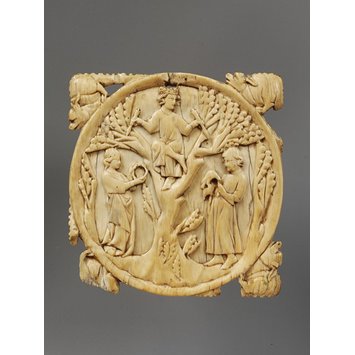 the God of Love and a Couple

Gothic ivory mirror backs survive in considerable numbers. The ivory cases themselves, usually between 8 and 14 cm in diameter, consisted of two paired ivory discs (described here as ‘mirror backs’), often with four crawling monsters or lions (or leaves) carved around the outer edge. These ornamental features would transform the circle into a square and make the opening of the case easier, although their vulnerability to breakage is now all too evident.
The majority of the ivory mirror cases and their leather boxes must have been purchased as expensive gifts, to be presented by the wealthy élite to their friends, family and lovers, and often as wedding presents. The subject matter of the mirror backs was almost exclusively secular. The God of Love appears regularly on ivory mirror backs, often pictured in the branches of a tree, like in the present piece.

The scene depicts the crowned God of Love, seated among the branches of a tree, with his legs crossed, holding two arrows which he points at two lovers standing below, to his right, a lady holding a chaplet, and to his left a gentleman holding a hawk. These are traditional symbols of amour courtois. The corner terminals of the ivory are formed by four crawling monsters with long ears and tails.

France (made)
Paris (possibly, made) 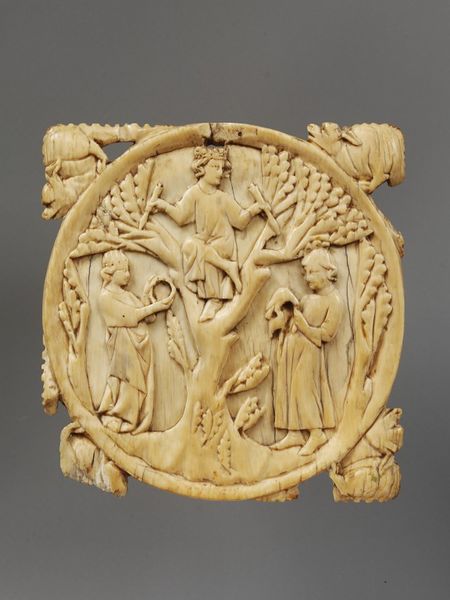