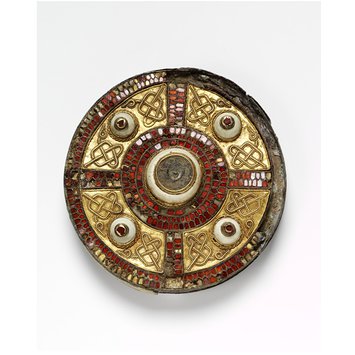 The Milton Jewel is one of the finest examples of Anglo-Saxon brooches of the period, with a sophisiticated design carried out in a combination of materials.The use of cloisons inlaid with garnet, filigree knot work decoration on gold sheet and shell bossess are typical of this type. The brooch was found in 1832 in a cemetery at Milton, west of Dorchester-on-Thames. There is another similar brooch in the Ashmolean Museum, Oxford, which was found nearby.

This brooch was found in Milton North Field, Abingdon, Oxfordshire, probably in 1832. It was kept at the British Museum (Reg. No.52 2.13 1) before its transfer to the V&A. There is a very similar brooch from the same cemetery in the Ashmolean Museum in Oxford.

Historical significance: Although found in Oxfordshire, it is highly likely that this brooch was made in Kent, as are other brooches of this type. The materials used to make this brooch testify to the international trade during the Anglo-Saxons period: the garnets probably came from Sri Lanka, and scientific research on other similar brooches has shown that the white shell is from Mediterranean species.

A disc brooch such as this, with the pin fittings on the reverse, is used to hold textiles together, either to close a cloak or a veil around the neck. The garnet bands radiating outwards from the centre of the brooch is typical of the decoration found on disc brooches.

BROOCH
Gold and silver with enamel and garnet inlay, on a backing of copper and compositions.
Justish (Kent); 7th century
From Mitton, near Abingdon [] 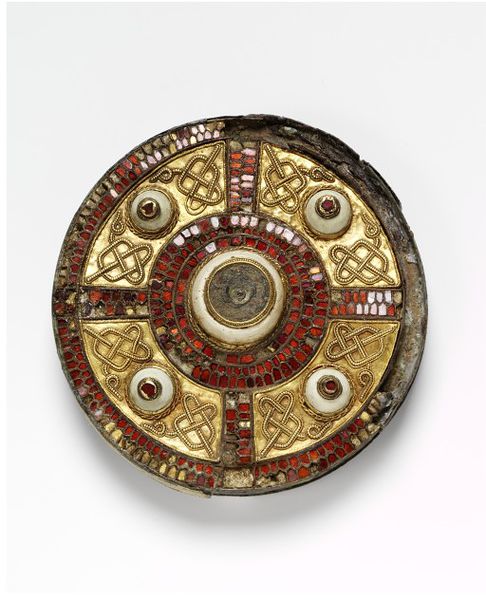