This is one of a group of 69 costume designs for the court ballets of Louis XIII, now in the V&A Theatre Collections. The designs, which date from 1615-1635, are from the workshop of Daniel Rabel (1578-1637), the artist responsible for creating costumes for the spectacular entertainments performed by and for the French court. The ballets were based on the social dances of the day, but this was social dance elevated to an elaborate art form which combined choreography with poetry, music, song and pageantry, and included elements of satire and burlesque. The ballets were enormously popular. Most were given at least three performances and all required a great amount of work from their creators and performers: the Ballet de Tancrède of 1619, which used elaborate stage machinery, is known to have had 30 rehearsals. Some professional dancers, actors and singers took part but the majority of the participants were members of the nobility. Many of these aristocratic amateurs were skilled performers, including the King, who adored dancing and devised some of the ballets himself.

The Ballet des Fées de la Forest de Saint Germain (the Ballet of the Saint German Forest Fairies), also called the Ballet des Ridicles, was first performed on 9 February 1625. The King was happy to spend enormous sums of money on his entertainments and this ballet was one of the most expensive, the costumes costing more that 16,380 livres. Its creator, René Bordier, devised a simple plot in which to set the dances. Five fairies from the Forest of Saint Germain visit Paris to admire the beauty of the Queen and her ladies. Each fairy has an outlandish entourage (peasants, musicians, dancers, gamblers or madmen) whose dances burlesque different branches of learning. Guillemine la Quinteuse, the Fairy of Music, was followed by a company of musicians led by the bespectacled figure who represented Music.

Costume design for a figure representing Music. A bespectacled female figure wearing a pink dress with a wide panniered skirt, with lutes hanging from the pannier. She holds a book of music in her left hand. A triangle hangs from her left ear and her headdress is made from a hurdy-gurdy. Mounted on paper in a card mount.

One of a group of 69 costume designs for the court ballets of Louis XIII acquired from a collection of 188 designs discovered in a private library in Germany. The designs were bound in an album, apparently dating from the 1580s. Each design is numbered, indicating that the collection as originally constituted contained 239 items.

Costume design for the Entry of Music
About 1625

One of the most expensive burlesque ballets performed at Louis XIII’s court, The Ballet of the Fairies of Saint Germain Forest was populated by humorous figures. Organised around the idea of playing games, it comprised a series of separate scenes known as ‘entries’ performed by bizarre characters. This figure, who appeared at the very start of the ballet, was immediately identifiable by her musical attributes.

By the workshop of Daniel Rabel

Louis the thirteenth (XIII) of France loved dance. He spent a fortune on special productions and costumes. This is a design for a music fairy. She has lutes, which are like guitars, hanging from her skirt and wears a musical triangle as an earring. 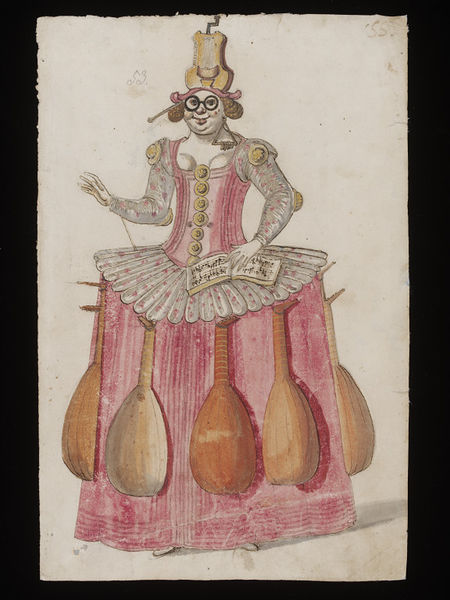