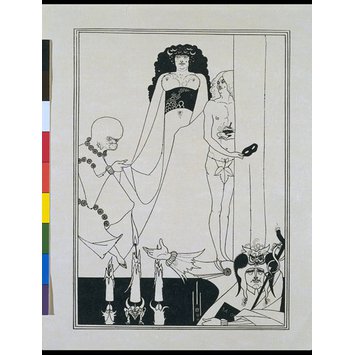 Black and white line block print on Japanese vellum depicting four figures, including the statuesque queen in the centre with bare breasts and billowing hair, a naked somewhat androgynous figure of a page, his genitals covered with a large fig leaf, a jester-type owl-capped figure in the bottom right and a foetus-headed grotesque attendant to the left of the image. This figure conceals a large erection beneath his garment. Further phallic motifs can be seen in the sconces of the candlestick in the lower frieze of the design.

'PLATE IX'
Printed text in the lower left hand corner of the sheet.

Signed with the artist's monogram, just off-centre in the lower section of the image.

According to Stephen Calloway in his book, Aubrey Beardsley, London: V&A Publications, 1998, pp. 74-75: 'In Enter Herodias, Beardsley introduced a retinue of dubious characters, including a bizarre, somewhat hermaphrodite figure of a page, whose feminine cast of features and uncompromisingly frontal nudity clearly revealed that he was unaroused by the splendid vision of the brazenly bare-breasted queen. Beardsley was required to conceal this sexually tell-tale detail, and therefore drew a large and quite clearly ironic fig-leaf tied in place with a bow across the equivocal page's loins. This satisfied the objectors, all of whom, astonishingly, failed to notice either the clear outline of a monstrous erection ill-concealed by the taughtly stretched garment worn by a second, far more grotesque - though sexually conformist - attendant, or the seemingly obvious phallic shapes barely concealed as the sconces of a strange candlestick in the lower frieze of the design. On a proof copy (made from a photograph taken before the drawing was altered, and which therefore preserves the entirely unexpurgated image) which he presented to his friend, Alfred Lambart, Beardsley wrote a short, wryly funny rhyme:
Because one figure was undressed
This little drawing was suppressed
It was unkind
But never mind
Perhaps it was all for the best.'

Regarding the use of embryo motifs in his work, Calloway stated on page 53 of the book above, that: 'Beardsley's obsessive depiction of embryo motifs around this time has fuelled endless, but ultimately inconclusive, speculation concerning the possibility of the traumatic involvement of either Aubrey or his sister (or, it has also been suggested, of both) in an abortion. The sight of either an actual embryo, or more likely an illustration of one clearly created an indelible impression upon the artist's imagination.' 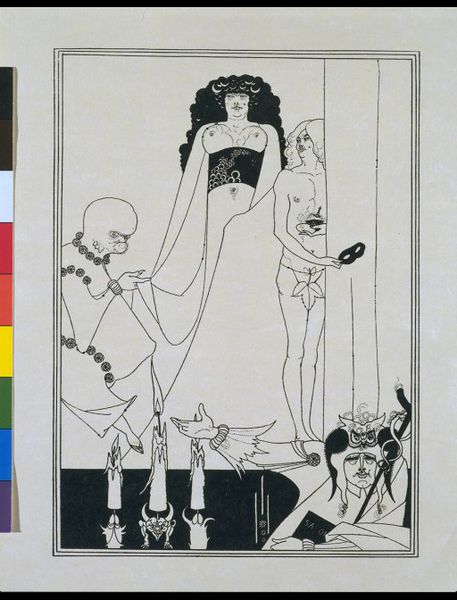