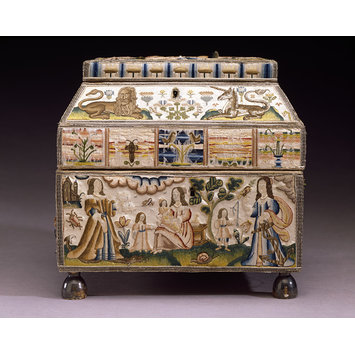 Object Type
Caskets like this were used by girls from well-off families in the 17th century for storing small personal possessions. The caskets were fitted inside with a variety of compartments, suitable for keeping jewellery, cosmetics, writing equipment and letters, needlework tools, tiny toys or keepsakes. They often had mirrors set into their lids, for dressing, and sometimes had secret drawers, in which to keep particularly precious possessions. The cost of the materials and the involvement of a cabinet-maker in making up such a box means tha it could only be made within a household which could afford such outlay.

People
Martha Edlin (1660-1725) worked a series of embroideries during her childhood, including this jewellery case, which were cherished by her descendants and passed down through the female line in her family for over 300 years. We know little about her life, except that she married a man called Richard Richmond and appears to have been a prosperous widow living in Pinner in Greater London at the time she drew up her will, with daughters and grandchildren.

Materials & Making
Following the usual development of needlework skills in a young educated girl in the mid-17th century, Martha Edlin embroidered a sampler in coloured silks at the age of eight, and a more complicated piece in whitework and cutwork at nine. By 1671, her eleventh year, she had embroidered the panels of an elaborate casket, and two years later this beadwork jewellery case. The needlework skills she demonstrated in these pieces would be important attributes in her adulthood, in the management of her household and the making, mending and decoration of her own and her family's clothes.

The embroidery is worked with silks metal thread and pearls, in raised work, laid floss silks, satin, back, rococo and tent stitch.

Casket composed of panels of white satin embroidered with coloured silks and metal thread, and mounted on a wooden base. In three main sections, the lid and the upper body both open on hinges from the lower body.

The flat lid is embroidered outside with the figure of Music dressed as a fashionable lady playing a lute, with representations of the four elements - air, fire, earth and water - in the four corners. There are areas of raised work and applied pearls. The edge of the lid is embroidered with a small geometric pattern in laid floss silks.

The upper body is covered with four sloping panels embroidered with animals taken from pattern books (the lion and unicorn, hare and hound, leopard and camel, and elephant and deer) above a row of squares worked with laid floss silks in geometric patterns with flowers and birds. The initials 'ME' are applied in pearls at the centre of the sloping front.
The front and sides of the lower body are embroidered with the seven virtues - Faith, Hope and Charity, Justice and Temperance, and Fortitude and Prudence. The back has a squirrel between two birds.

The stitches used include satin, back, rococo and tent stitch.

The inside of the lid is lined with padded pink silk. When open, it reveals a tray lined with a section of a print showing the story of David and Goliath, and with mirrors lining the edges and small plaster pillars. The tray lifts out to expose a compartment lined with marbled paper underneath it.

The inside of the upper body has a removable mirror in its lid, and with an area of padded pink silk on either side. Raising the upper body reveals a tray lined with padded pink silk. To the right hand side are a glass bottle with a metal lid, a box faced with pink plush which when lifted out reveals a secret drawer inside, and a section with slots for rings which has a secret drawer underneath. This whole tray lifts out to expose the bottom area of the casket lined with padded pink silk. All the undersurfaces of the trays and drawers are covered with marbled paper.

The casket stands on four wooden feet. It has keyholes in the upper and lower fronts. It is trimmed between the panels and at the edges with silver braid.

Embroidered satin with silks and metal thread, mounted on wood, applied with pearls and lined with silk, plaster, paper and glass

'ME'
decoration and Makers's mark; applied in pearls at the centre of the sloping front

The panels would have been embroidered by Martha Edlin, then sent to a professional workshop to be mounted into a casket.
Passed down through the female line from the maker to the vendor. Previously on loan to the V&A since 1927. Related papers: Lady Gerahty NF, Gillian Lewis NF, 86/713.

Casket composed of panels of satin embroidered with silks and metal thread, and mounted on wood, embroidered by Martha Edlin, England, 1671

British Galleries:
Martha Edlin embroidered the panels of this casket when she was eleven. She may have adapted motifs from prints, or embroidery pattern books. Alternatively, she could have bought pre-drawn silk panels. The finished panels were probably sent to a cabinet-maker, who assembled them as a casket. [27/03/2003] 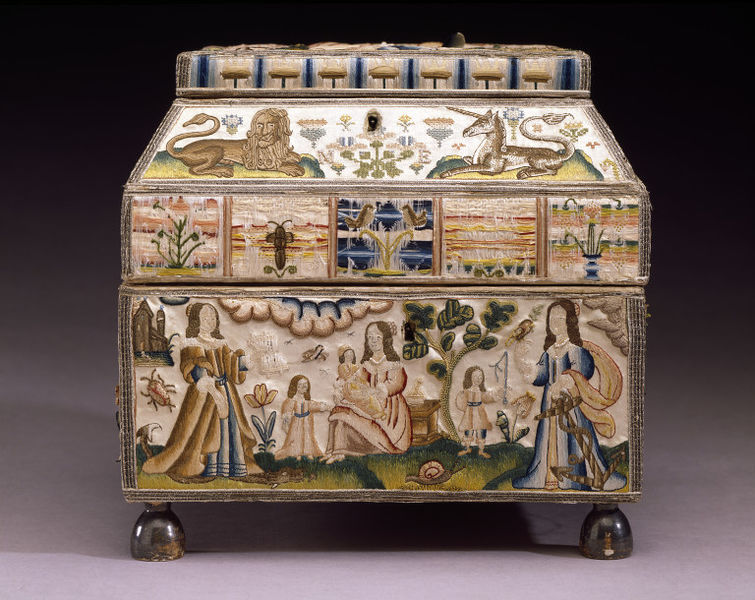