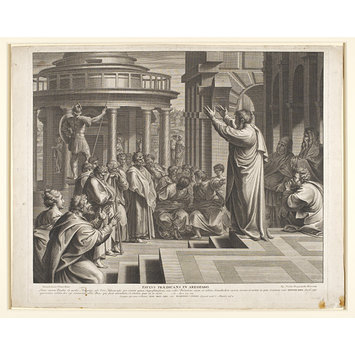 This print is in reverse of the cartoon from which it is derived. The so-called Raphael Cartoons are seven full size designs for tapestries by the great Italian Renaissance artist Raphael (1483-1520). They illustrate passages from the Bible concerning the lives of Saint Peter and Saint Paul. None of them is smaller than ten feet high by thirteen feet wide. They belong to Her Majesty the Queen and have been on loan to this museum since 1865. The earliest print relating to the Raphael Cartoons dates from 1516, the year in which Raphael received final payment for the commission. It inaugurates an extraordinary case study in the history of printmaking, stretching over more than four hundred and fifty years and across a wide range of printmaking techniques. This print is in reverse of the cartoon and therefore the same direction as the tapestry.

The engraver and antiquarian George Vertue had met and spoken with Dorigny. Vertue records that "several gentlemen of note travelling to Rome there found Mr Dorigny who was then in the highest reputation for several engraved works after Raphael. These got him justly the reputation of the first engraver in Europe for which reason several Curious persons persuaded & engaged him to come to England to undertake those Famous Cartons at Hampton Court painted by Raphael...From his coming to England [in 1711] I may justly date the rise of the reputation of the engraving."

Saint Paul stands on steps in front of a building, right, preaching to a crowd. Behind is a townscape and two buildings, one rotund with marble columns and statues in niches, the other square with arches. There is a statue of Mars just behind the listening crowd.

This print is in reverse of the cartoon from which it is derived but faithfully reproduces the compositional details of the original.

St Paul Preaching at Athens by Sir Nicholas Dorigny (1657-1746); from a cartoon by Raphael for the tapestries in the Sistine Chapel; etching and engraving; British; originally printed 1719, a later impression. 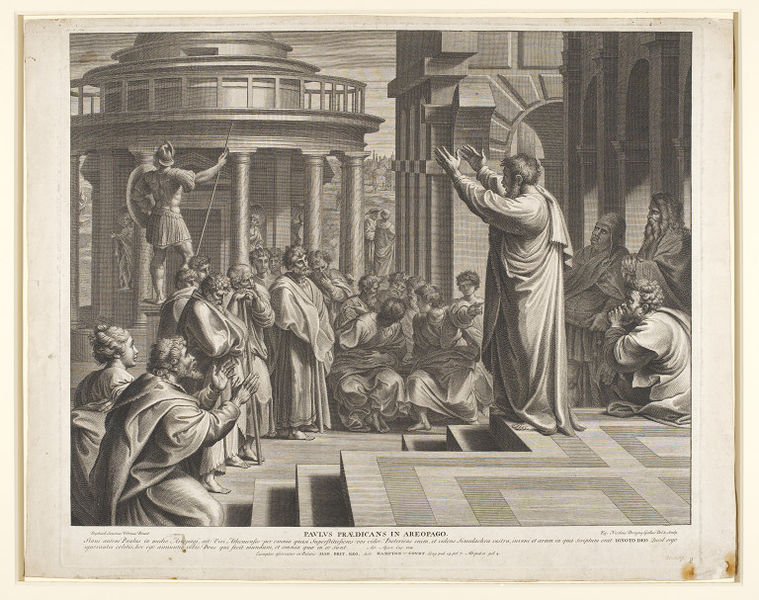