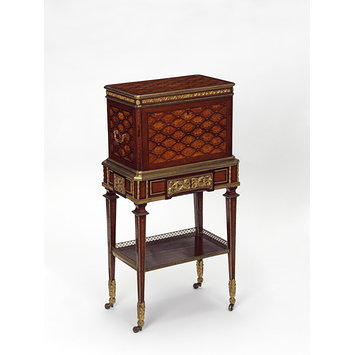 This is one of the most exquisitely made pieces of furniture in the V&A's collections. The small drawers and compartments are made with extreme care and the outside is veneered with the highest-quality marquetry and set with gilt-bronze mounts that are almost as finely finished as jewellery.

It was made in about 1775–1780 in Paris by the royal cabinetmaker Jean-Henri Riesener, but unfortunately it is not known for whom it was made. Riesener’s name is stamped in three places underneath the stand, as was required by the guild of cabinetmakers in Paris at the time. It combines a jewel coffer with the fittings for a small secrétaire, and one side hinges down to provide a writing surface. The coffer is fitted with many trays and with a number of secret drawers, some of which were not discovered until the 1990s.

A jewel coffer and secrétaire on tall stand, veneered in trellis marquetry in sycamore, stained grey, with trellis in bois satiné and boxwood, with further marquetry in ebony, boxwood, tulipwood and purpleheart; mounts of gilt bronze. The inner trays are lined with silk and one side hinges down to allow the piece to be used for writing

Veneered in grey-stained sycamore, with marquetry of other woods, on a carcase of oak

J H RIESENER
Stamped three times on the underside of the stand, once on the front rail and twice, very indistinctly and partly overlapping, on one side rail

Acquired by John Jones before 1882

Jewel coffer and secrétaire, veneered in trellis marquetry of sycamore and other woods on a carcase of oak; mounts of gilt bronze, made in Paris, 1775-1780

For this small but exquisite piece Riesener combined intricate marquetry decoration, grey and yellow when the woods were new, with finely finished gilded metal mounts. It is filled with numerous trays and hidden compartments. Although we do not know its original owner, she must have been of the highest rank.

Jean-Henri Riesener, who became official cabinet-maker to the French Court in 1774, produced a table with similar parquetry for the use of Marie-Antoinette in 1778. 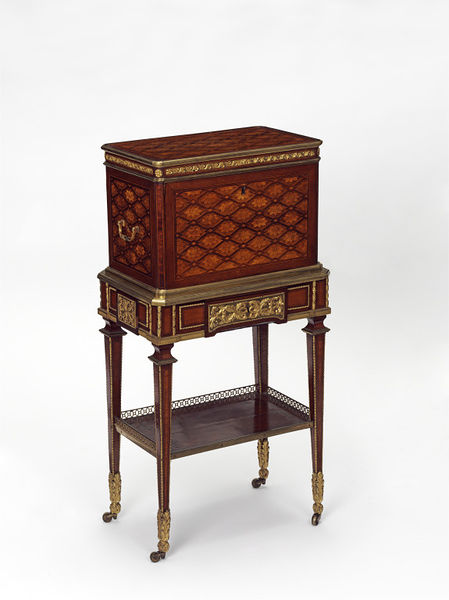