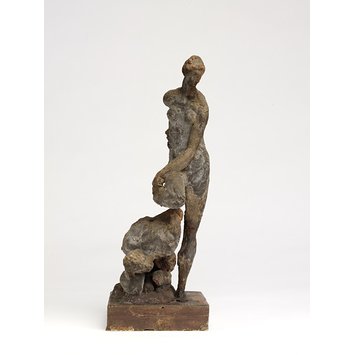 This wax model is the earliest recorded stage in a series of surviving models for Giambologna's colossal marble group, Florence triumphant over Pisa, now in the Museo Nazionale del Bargello, Florence. It represents the city of Florence, personified as a powerful but elegant female, triumphing over the crushed figure of Pisa, the nearby rival city then under Florentine rule, and clearly precedes the terracota model dated to 1565, also held in the V&A (A.24-1979). The group was originally commissioned in 1565 as a pendant to Michelangelo’s Victory, and was intended to be displayed with it in the Salone del Cinquecento of the Palazzo Vecchio at the festivities of Francesco’s marriage to Joanna of Austria in December that year. However, there was insufficient time even for the marble block to be chosen and transported from the quarry and instead the full-sized plaster model (currently in the Palazzo Vecchio, Florence) was substituted for the final work, which was not completed until 1570.

A 'sketch-model' in wax of a male figure, Pisa, crouching head downwards with his arms behind his back, while over him stands a naked female figure, Florence, whose right knee is poised above his shoulder.

The right arm and right foot of the female figure and both feet of the male prisoner have been broken off. There are other small breakages and the base is made of wood and lead.

This sketch-model, or pensiero (initial idea), dates to 1565 and is constructed of red wax built up around an iron armature and stuck into a rough off-cut of wood to stabilize it. Once the wax mixture was made up by adding animal fat (tallow) and turpentine to render it more malleable, it was allowed to cool and would have then been made into sticks and rolls and gradually added to the armature using modeling tools of bone, iron or wood, before being smoothed and finished with fingers.

Radiography has revealed that the armature is straight and vertical, except for a slight bend forward at the top to accommodate for the downward turn of Florence’s head. This armature is quite substantial in proportion to the figure built around it, but given the nature of the pose, it provides the sculpted form with internal support. The anatomical forms are very slender and apparently ‘Mannerist’ at this stage, probably because Giambologna was concentrating on the disegno or linear pattern of the limbs and axis of the body, which is more legible without the full bulk of torso and muscles.

Giambologna’s preliminary waxes range between 10 and 25 cm in height and are then followed by more substantial models in clay, two or three times as big, in which the skeletal forms of the initial wax model are fleshed out to more natural proportions, demarcating the volumes to give a more accurate idea of the general appearance of the final statue.

Historical significance: The present model was clearly made before the gesso version, (currently in the Palazzo Vecchio, Florence) since the composition is less compact and more closely related to the Victory, of Michelangelo. The wax-version is therefore accepted as the earliest recorded stage in the a series of surviving models of Florence triumphant over Pisa, now in the Bargello. It represents the city of Florence, personified as a powerful but elegant female, triumphing over the crushed figure of Pisa, the nearby rival city then under Florentine rule, and clearly precedes the terracota model dated to 1565, also held in the V&A (A.24-1979).

More models in wax or clay by Giambologna have survived than any other Renaissance sculptor and he chose to be portrayed with his models twice in the 1570s. This reflects not only the personal importance he attached to them as a stock-in-trade, but also the growth of interest during the sixteenth century in collecting the models that lay behind the finished masterpieces of art in which sculptors sought to resolve their ideas before committing them irrevocably to marble or bronze.

Despite his dependence on modeling, his working method varied considerably from that of Michelangelo, who made comparatively limited use of assistants. In contrast, Giambologna set up an extremely efficient workshop, concentrating his own efforts on invention and design, and ceding most of the time-consuming execution of the finished marbles and bronzes to others.

This model was purchased with the Gherardini collections as a study by Michelangelo for the Victory in the Palazzo Vecchio, Florence. However, this identification was not endorsed by Robinson, who omitted the model from his catalogue. Subsequently, it was noted by Maclagan and Longhurst as a study for Giambologna’s Florence triumphant over Pisa, later known as Virtue overcoming Vice, in the Museo Nazionale, Florence. A full-scale gesso version was prepared in 1565 and was exhibited in the Palazzo Vecchio along with Michelangelo’s Genius Of Victory, from which the design derives.

Between 1568 and 1570 a colossal marble version of the group was carved in Giambologna’s workshop. This was originally commissioned in 1565 by Prince Francesco de’ Medici as a pendant to Michelangelo’s Victory, which had been presented to the Medici by Michelangelo’s nephew and heir following the master’s death the previous year. The two marbles were intended to be displayed together in the Salone del Cinquecento of the Palazzo Vecchio at the festivities of Francesco’s marriage to Joanna of Austria in December that year. However, there was insufficient time even for the marble block to be chosen and transported from the quarry and instead the full-sized clay model (currently in the Academia, Florence) was substituted for the final work, which was not completed until 1570.

Reduced derivatives from the marble version exist in various collections including the Pinacoteca Estense at Moderna, the Metropolitan Museum, New York and the Wallace Collection, London

The sketch-model shows an early stage in the planning of Giovanni Bologna's statue of the same subject. The statue was commissioned as a pendant to Michelangelo's Genuis of Victory, and was exhibited in the Palazzo della Signoria, Florence, on the occassion of the marraige of Francesco de' Medici (1565). The original gesso, which was shown on this occasion, is now in the Palazzo Vecchio, Florence; a version of it was carved in marble in 1569-70 and is now in the Museo Nazionale del Bargello, Florence. [1986]
These two models form the first stages in the development of the two-figure group commissioned as a pendant to Michelangelo's Genius of Victory for the Palazzo Vecchio, Florence. The full-scale gesso (or plaster) model (now in the Palazzo Vecchio, Florence) was put in position for the wedding celebrations of Franceso de' Medici in 1565. The marble version, which was not carved until 1569/1570 with the assistance of Pietro Francavilla, is now in the Museo Nazionale in Florence. [1995]
Before making a terracotta model (9), the sculptor often made a quick wax sketch around a wire support. This is probably Giambologna's first sketch for his colossal marble group in Florence. It explores the relationship between the two figures and captures the basic composition. [204] 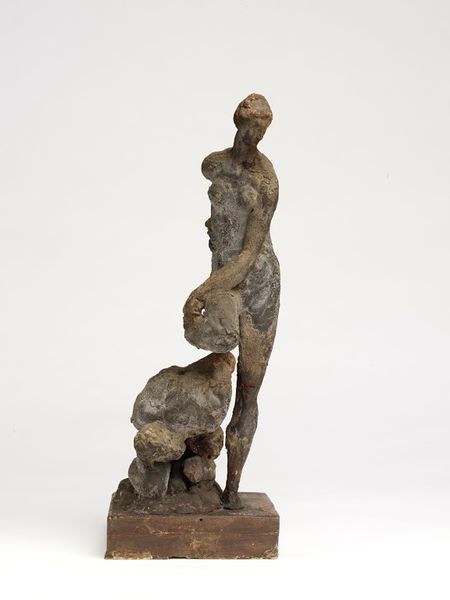