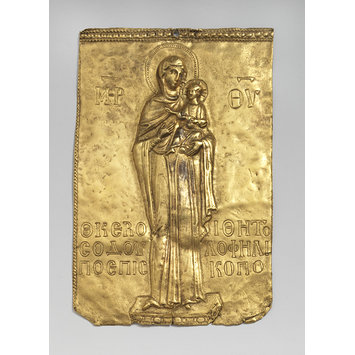 This Byzantine plaque is a type of image known as the 'Mother of God showing the Way'. It was found on the Venetian island of Torcello, and the inscription, commemorating a 'bishop Philip' is probably a later, Italian addition. This is a good example of the sort of Byzantine object that made its way into Europe between the twelfth and fourteenth centuries. The plaque may even have been part of the plunder from the Fourth Crusade, which sacked Constantinople in 1204. Images of this sort were an inspiration to Venetian artists who created similar reliefs as altar furnishings. Byzantine images and object types were an important inspiration for Western European artists and patrons at various times throughout the middle ages.

Embossed copper-gilt plaque representing the Virgin standing on an ornamental pedestal, holding the Christ child in her left arm, and gesturing towards him with her right hand. Christ looks up at his mother, and grasps her mantle with his right hand. Along the top of the plaque is a punched ornamental border, along with a hole in the centre. There are traces of a similar border along the left hand side of the plaque. The plaque has been trimmed at the bottom and the side. It has also been regilded.

O Lord God, strenghten thy servant Philip the Bishop
This inscription, due to oddities in its lettering, might be a later addition.

This plaque formed part of the collection of Robert Curzon, later Lord Zouche (1810-1873), and may have been purchased by him during his travels in Italy in the early 1850s. It was exhibited in the museum in the 1870s as having been "obtained from Torcello". On acquisition by the Museum in 1891, this history was elaborated further by explaining that the plaque was "one of a series, which was used to decorate the front of a rood loft in the basilica of Torcello".

However, reconstructions of the twelfth century pala d'oro in Torcello demonstrate that the V&A plaque did not in fact form part of this object. Furthermore, whilst the plaques from the pala d'oro are of silver-gilt, the V&A plaque is of copper.

The early history of this object is therefore unknown, although there is little reason to doubt the tradition that it came from Torcello.

Historical significance: This is a good example of the sort of Byzantine object that made its way into Europe between the twelfth and fourteenth centuries. Futhermore, plaques of this sort must have been an inspiration to the Venetian artists who created similar metal reliefs as altar furnishings in this period. Byzantine images and object types were an important inspiration for Western European artists and patrons at various times throughout the middle ages.

The image on this plaque represents the common Byzantine subject of the Virgin 'Hodegetria', the Mother of God showing the way. Although it may have originally formed part of an altar decoration, the presence of the votive inscription suggests that it probably functioned as an icon for private devotion. The Bishop Philip mentioned in the text might be Filippo Balardo, Bishop of Torcello 1373-1405, which might explain some of the oddities in the inscription text, as it would have to be a later, Italian, addition to the object. Bishop Filippo had previously been attached as sub-dean to the cathedral church of Modon in Greece, and so presumably could read Greek. It is also possible that he was responsible for bringing this plaque to Torcello.

The plaque was probably originally mounted on a board with a jewelled frame, possibly with wings. Another possibility is that the plaque, with its intercessory inscription on behalf of the bishop's soul, fulfilled some funerary function.

THE VIRGIN AND CHILD
Copper gilt
Inscribed in Greek: "Mother of God, strengthen thy servant Philip the bishop…"
Byzantine; 12th century
From the rood-loft of the cathedral of Torcello []

Although this piece has been variously dated (usually to the twelfth century), and it has been supposed to be Italian, a close comparison with Constantinopolitan eleventh century ivory reliefs of the Virgin and Child in Utrecht, London and New York would suggest that this relief was in fact made in Constantinople in the second half of the eleventh century.

The Venetian provenance of this object is particularly interesting, given the development in Venice during the twelfth and thirteenth centuries of Byzantine-inspired silver altars at sites such as Caorle, Torcello and San Marco. Objects like this plaque, entering Venice either as a result of trade, or as part of the plunder of the Fourth Crusade, may have played a part in influencing such works.

The only closely comparable relief of similar date is a copper-gilt plaque in Plovdiv, Bulgaria - this is of a coarser execution and probably slightly later date. 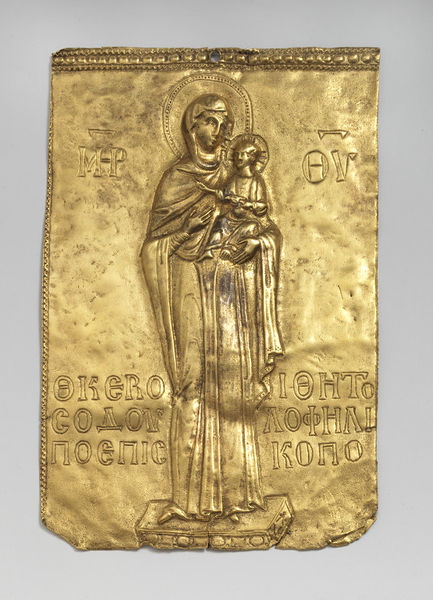