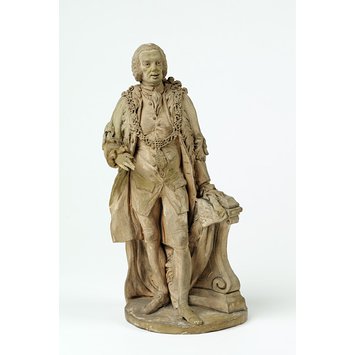 When planning a new work, the sculptor usually made preliminary drawings and then a model. The models sometimes formed part of his contract with the patron. They could be rough or detailed, large or small, and were made in clay, terracotta, wood and wax. Smith submitted this model for the competition for a commemorative statue of William Beckford. Other London sculptors, including Agostino Carlini and John Flaxman, also submitted models, but John Francis Moore had in fact already been selected.

The subject William Beckford was baptised in Jamaica in 1709. He was the grandson of Peter Beckford (bap. 1643, d. 1710) who travelled to Jamaica as a young man and became the founder of the greatest sugar fortune in the West Indies. His son, Peter Beckford, William’s father, was also a sugar planter, as well as speaker of the Jamaica house of assembly and comptroller of customs.

Beckford stands wearing a short wig and the Lord Mayor's robes, open in front to show contemporary dress. His right hand is raised, his left rests on a pedestal and holds a scroll inscribed 'The Humble Address'. Base inscribed.

'THE HUMBLE ADDRESS'
on the scroll

Possibly the model included in the sale of the collection of Richard Wyatt, Milton Place, Egham Surrey, 19 March 1813, lot 320, sold by Mr Daniel Smith. Re-discovered on the London Art market in 1928 by Mr. Lans Clarke in the possession of the dealer J. Rochelle Thomas, The Georgian Galleries, King Street, London, on sale for £12. Mr Clarke advised Eric Maclagan of the statuette, which was taken on by the Museum on approval. It was purchased by Dr W.L. Hildburgh, F.S.A. and given by him to the Museum as a Christmas gift in 1928.

William Beckford was baptised in Jamaica in 1709. He was the grandson of Peter Beckford (bap. 1643, d. 1710) who travelled to Jamaica as a young man and became the founder of the greatest sugar fortune in the West Indies. His son, Peter Beckford, William’s father, was also a sugar planter, as well as speaker of the Jamaica house of assembly and comptroller of customs.

William was schooled in England but returned to Jamaica after the sudden death of his father in 1735. Two years later the death of his brother Peter, the principal heir, left William with the majority of his family’s vast Jamaican estates, which included complete ownership of eleven sugar plantations and at least 1737 slaves. By the time of his death this had been extended to thirteen sugar plantations and approximately 3000 slaves. During the nearly ten years he was resident on the island he was largely preoccupied with the management of his estate: purchasing land, slaves, equipment, and supplies: lending money to planters and engaging in trade and shipping.

In 1744 William returned to England and within three years had entered parliament. He served as Member of Parliament for Shaftesbury from 1747 to 1754 and MP for London from 1754 until his death in 1770. He also served twice as Lord Mayor and his mayoralty was notable for its luxurious character. His mayoral banquets were renowned for their extravagance: one banquet alone was said to have cost him £10,000.

During his political career in England, William was leader of an influential group of MPs who were absentee proprietors from the West Indies. Unpopular with the public for their identification with slavery, ‘nouveau-riche’ status and habits of conspicuous consumption, the ‘West Indies lobby’ used their political influence to resolve debates in their favour, particularly when involving issues such as the military defence of the colonies, trade and shipping and public and private finance.

As an individual whose personal wealth depended on the labour of enslaved Africans, it is no small irony that William’s political profile was founded on his defence of the City of London’s liberties. He delivered a remonstrance drawn up by the Court of Common Council to King George III, asking him to dissolve Parliament and dismiss his ministers. He also made a speech directly to the King asserting the loyalty of the citizens of London to the Crown and the Constitution. After William’s death his supporters showed their respect by voting a statue in his memory to be placed in the Guildhall; it represented him in his robes of office, delivering his speech to the king, which was inscribed on the pedestal in letters of gold. This statuette by Nathaniel Smith was one of those proposed as the design for the commemorative statue. In fact, one by John Francis Moore had already been selected. 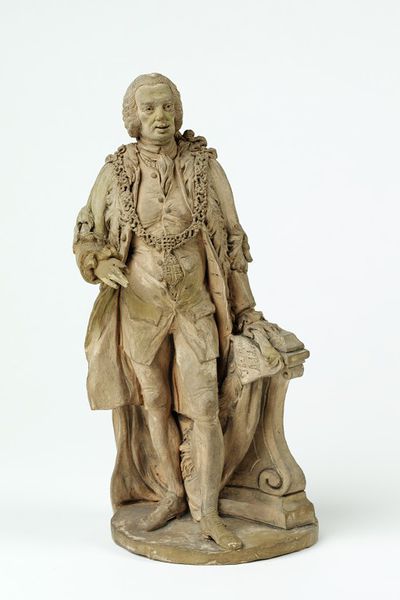