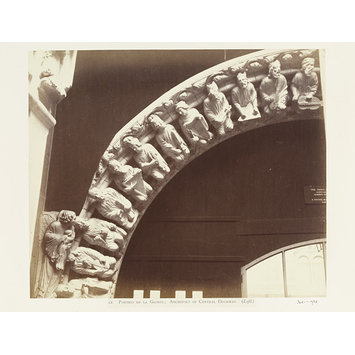 In September 1865, John Charles Robinson, curator at the South Kensington Museum (which was to become the V&A), travelled to Santiago de Compostela as part of an expedition to acquire Spanish artworks for the Museum's collection. Impressed by the Portico de la Gloria at Santiago, he determined that the Portico should be reproduced and recorded in order to be displayed at the South Kensington Museum. To this end, in 1866, Robinson sent Museum photographer Charles Thurston Thompson (1816-1868) to photograph the cathedral and Domenico Bucciani, London's leading producer of plaster casts, to produce the casts which later took pride of place in the new cast court when it completed in 1873.

Thompson returned with 86 views of the cathedral. From these, under the aegis of Department of Science and Art, The Arundel Society issued a volume of 20 photographs of Santiago attributed to Thompson. Published in the later half of 1868, Thompson never got to see the spendid volume as he died in January of that same year. Curiously, in the table of contents, there is a note concerning three of the views: 'From their position in the portico, the Archivolt and Tympanum of the Central Doorway could not be satisfactorily photographed; Nos. 12, 13, and 14 were therefore taken from the Casts in the South Kensington Museum'. It has now been determined that these three views, of which this photograph is one, were taken by Thompson's successor, Isabel Agnes Cowper (1826? - 1911).

Cowper was the sister of Thompson, and of the Superintendent of the Museum, Richard A. Thompson. Little is known about Cowper, but in her letter of resignation in 1891, she refers to herself as the Museum's 'Official Photographer', having taken up the position after the death of her brother. This image with the fragments of the sign written in English and of the museum window, provide a context that is lacking in Thompson's views. Such a context points to the role of the Museum in the early 19th-century.

A mounted albumen photograph showing the detail of an intriquately carved archway featuring biblical persons. In the background is visible a fragment of a sign in english and a portion of a frame of a window.

These images were previously attributed to Charles Thurston Thompson. But as per album table of contents note: 'From their position in the portico, the Archivolt and Tympanum of the Central Doorway could not be satisfactorily photographed; Nos. 12,13, and 14 were therefore taken from the Casts in the South Kensington Museum', it is clear that these images were taken at a later date. An entry in the Photography Register from May 22, 1868 provides a clue to their origin: '3 mounted photos. Santiago, Cathedral. Porta della Gloria, photographed from the cast in the S.K.M. [South Kensington Museum] by Mrs. I. A. Cowper'. It is now clear these photographs were taken after Thompson's death by his successor as Official Photographer at the South Kensington Museum, Isabel Agnes Cowper.

Thurston Thompson went to Spain to photograph the magnificent Cathedral of Santiago de Compostela. His photographs were published in an album. It also included photographs of plaster casts of the cathedral’s Pórtico da Gloria which were installed in the South Kensington Museum as part of its collection of reproductions. These photographs were by Cowper, though she was not credited. 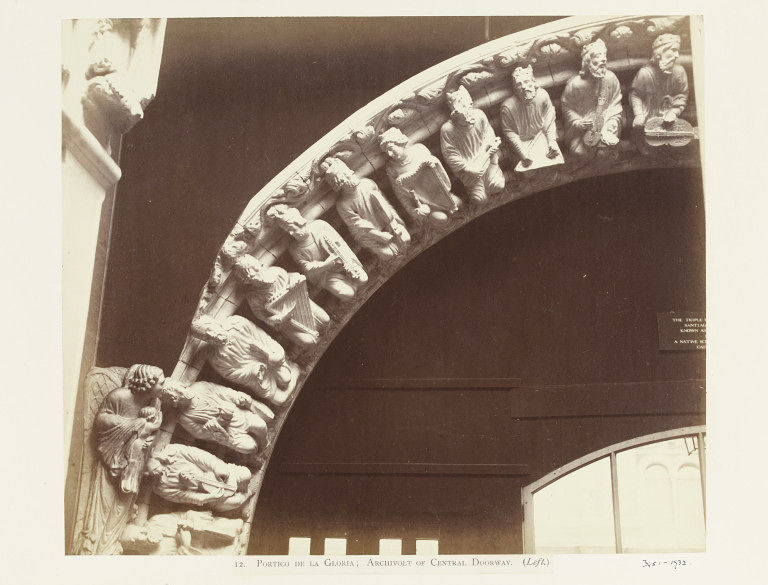