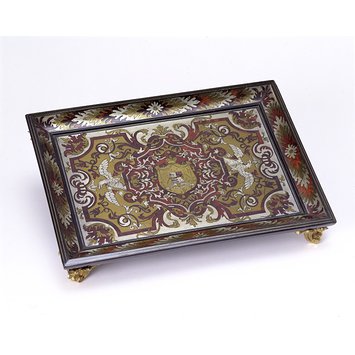 Many English aristocrats developed a collector's passion for French decorative arts in the half-century following the French Revolution in 1789. They bought the highest-quality furniture made in France between about 1660 and 1789, and, not surprisingly, a strong trade in heavily restored pieces also developed to satisfy their demand. This tray is decorated with boulle marquetry, a technique that uses metals and tortoiseshell in place of the usual wood veneers. In the centre of the tray, the decoration includes the arms of a member of the Egerton family, probably those of Francis Egerton, who succeeded in 1823 as the 8th Earl of Bridgewater. He was a scholar and eccentric who lived in Paris from about 1812 until his death in 1829. The coronet, however, is not one that would normally appear with an English coat-of-arms. It is the form of coronet used by a continental prince. A possible explanation is that the boulle marquetry was made in the late seventeenth century and decorated with a quite different coat-of-arms, and was only adapted in about 1820 for use on this tray, with the addition of the Egerton arms in place of those that had been there before. This might have suited Francis Egerton very well, for he had been made a Prince of the Holy Roman Empire.

A rectangular tray, raised on four scrolled gilt brass feet, the tray with a deep, everted border on all four sides. The main panel of the tray is veneered with boulle marquetry, in brass and tortoiseshell on a ground of pewter, with shaped, symmetrical panels outlined and decorated with scrolls, with a central panel of tighter scrolls centring on the arms of the Duke of Bridgewater, including the motto 'Dieu et mon honneur', the arms highlighted in coloured enamels. An eagle is set against the centre panel to the right and the left. The inner face of the sloping frame to the tray is set with overlapping formal leaves, all in boulle of pewter, brass and tortoiseshell.

The arms show:
Quarterly, first and fourth: argent, a lion rampant gules between three pheons' heads (for Egerton). Second: azure, three fleur-de-lys or (for France), quartering gules three lions passant guardant or (for England). Third: barry of six, azure and argent, with a label of five points gules (for Grey). The motto 'Dieu et mon Honneur' is from the Egerton family (Dukes of Bridgewater)

Substrate of painted wood veneered with marquetry of pewter, brass, turtle shell and possibly horn, painted on the reverse, the marquetry materials all engraved and inset with a coat of arms of pewter, engraved, with possibly horn, painted on the reverse; stringing of pewter; mouldings of ebony or ebonised wood; highlighting of coloured enamels; gilt-brass mounts

Coat of arms:
Quarterly, first and fourth: argent, a lion rampant gules between three pheons' heads (for Egerton). Second: azure, three fleur-de-lys or (for France), quartering gules three lions passant guardant or (for England). Third: barry of six, azure and argent, with a label of five points gules (for Grey). The motto 'Dieu et mon Honneur' is from the Egerton family (Dukes of Bridgewater)
These are the arms of a member of the Egerton family, possibly Francis Egerton.

The arms are certainly those of the Egerton family and correspond most closely to the description of the arms of the eighth and last Earl of Bridgewater (born 1756, succeeded to the title 1823, died 1829). His arms are described as follows:
Quarterly, first and fourth: argent, a lion rampant gules between 6 pheons [arrowheads] sable (for Egerton); second and third: barry of 6 argent and azure, a label [bar] of five points gules (for Grey).

The Rev. Francis Henry Egerton was a scholar and eccentric, who succeeded to the title while living in Paris in 1823. The coronet is puzzling however, because it is that of a continental prince rather than an English Earl or Duke. It seems likely that the Egerton arms were superimposed over an earlier coat of arms, probably French and dating from around 1700. The lion and the horse supporters may have been left from the earlier scheme because they closely resembled the supporters of the Egerton arms, a lion and a gryphon. The eagles may also have been left because of their resemblance to the Egerton crest of a falcon [check].

Francis Egerton was elected a Fellow of All Souls College, Oxford in 1780 and a Fellow of the Royal Society in 1781. In 1791 he was elected a Fellow of the Society of Antiquaries of London. He left Britain to live in Paris in the early years of the nineteenth century and the publication of various works there suggests he was living there from at least 1812 to 1829. He lived in the Hôtel de Noailles, rue Sanctionary, which he called the Hôtel Egerton. There he collected cats and dogs and dressed his favourites in human costume, taking them for drives in his carriageand entertaining them as guests at his table.

It is possible that the tray was newly commissioned in the first quarter of the nineteenth century by Egerton, using a French coronet with his family arms deliberately, but the most likely explanation is still that an older panel of armorial marquetry was adapted for his use.

The style of the marquetry is consistent with some pieces attributed to the Boulle workshop.

Rectangular tray with rising concave sides, veneered with boulle marquetry, made in London or Paris, 1820-40

This tray is probably a palimpsest, built up on a nineteenth-century substrate with a panel of late seventeenth-century marquetry, probably German or Viennese, into which an armorial achievement has been inlaid. 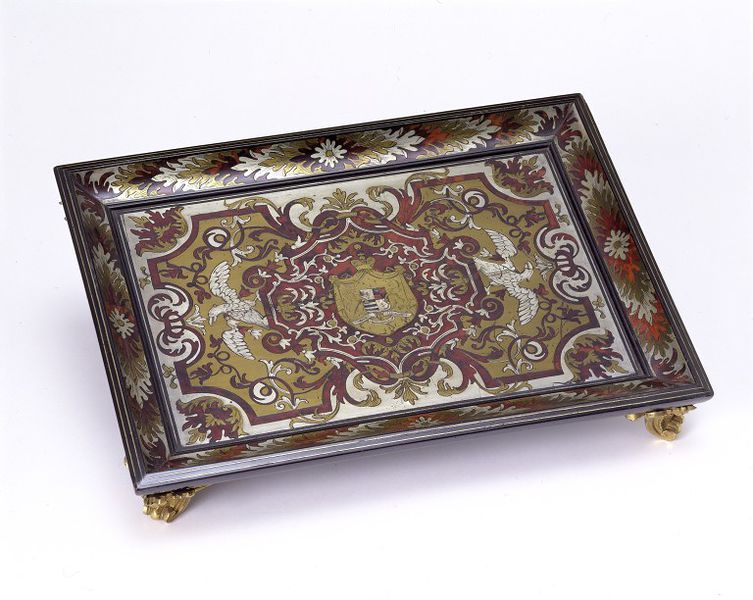