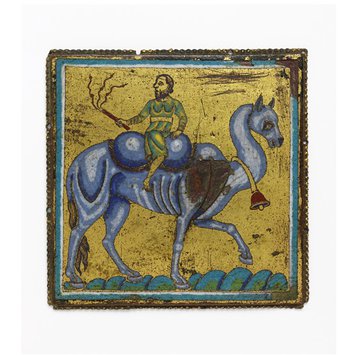 This is one of a group known as the Llangattock or Rolls Plaques which is of outstanding interest both technically and iconographically. It is a brilliant example of the art of enamelling as practised in the 12th century in the area around the Meuse (now in Belgium), centred on the bishopric of Liège. The boldly engraved figures are enriched by a subtle range of enamel colours, often blended to emphasise figure contours or drapery folds. Prominent features such as heads and hands are not enamelled but engraved and gilded. Mosan enamellers were amongst the most skilled craftsmen of their time, and produced items for liturgical use – crosses, altars, reliquaries and candlesticks – numbers of which survive.

This plaque depicts a man on a dromedary camel.

Square plaque of gilt copper alloy and decorated with champleve and cloisonne enamel, depicting a man riding a camel.A man riding a camel (either part of an Old Testament scene (Solomon and Sheba ? Joseph's brothers ?) or a 'Bestiary' subject?) Back: Varnished brown as M.53A-1988; long diagonal scratch marks; no other features. Front: Minor scratches and areas of damage to the gilding; an area of enamel lost on the camel's body. The enamel frame is off-white within turquoise, unique within the series but as on M.53-1988 reversed. The camel strides towards the right, the main lines of its anatomy reserved and gilded, the body itself modelled in deep blue/pale blue/blue white. Around the neck is an opaque red bell with blue interior, its strap and clapper reserved and gilded. The engraved lower edge of the saddle has diagonal incisions which are filled with pale blue and red glass The rider is bearded and turns back, his head shown in profile his hair and features are filled with blue enamel (now much oxidised) ; his draperies are of turquoise/green/yellow and holds an opaque red whip with three lashes, which emerge from a yellow knob. The ground is formed as so often in the group by rounded hillocks of turquoise/deep green. The palette is thus limited in comparison to some of the other plaques; uniquely there is no employment of the translucent deep red; this plaque may not have been an isolated representation, but part of a larger scene on two or more plaques.

Historical significance: The plaques were first publicly exhibited in 1857 at the Manchester Art Treasures exhibition, and again in 1862 at the South Kensington Museum Loan Exhibitions by J.E.W. Rolls (cat. p.83, nos.115-7). They were first discussed at length by H.P. Mitchell (of the Metalwork Dept., V&A) in two influential articles in the Burlington Magazine, 1919 (vol. XXXV, pp.34 ff. and 217 ff.): he associated them on grounds of style and technique with two plaques in the Louvre. Subsequent discussion has focussed on the iconographic interpretation of these and other plaques -the series being now extended to twelve, all with similar borders, attachment holes and styles. An exceptional feature of the Rolls plaques is that their iconography is not overtly Biblical unlike most of the rest of the series. Of the plaques -Alexander's ascent to the Heavens and the man on a camel- treat subjects not otherwise recorded in enamel, and illustrate a secular side of life which has rarely survived. The Alexander scene derives from medieval romance, the other is unknown. However, they could also bear moral or theological interpretations (Alexander representing pride, Christ's Ascension, the man on a camel as Christ's humility, and Samson and the lion as a prefiguration of the Harrowing of Hell). The entire series probably showed the complete Life of Christ, with Old Testament prefigurations, and probably formed an altarpiece. It has even been suggested that the plaques were for Abbot Suger's great altar cross at St. Denis (although this seems unlikely, since his cross was probably decorated only with Christ's Passion and Resurrection). Another plaque from this group -Moses and the brazen serpent (Numbers, XXI,9) -is in the Museum (M.59-1952) but this is very badly damaged and lacks all enamel. Others from the series are now in the British Museum (Naman bathing in the Jordan); New York, Metropolitan Museum (the Baptism, the Crucifixion, the Holy Women at the Tomb, Pentecost); Paris, Louvre (Sts. Sebastian, Tranquillinus, and Livinus). Various writers have drawn attention to the close stylistic parallels between the series of plaques and the great Stavelot reliquary-triptych (now in the Pierpont Morgan Library, New York). This was probably commissioned for his abbey at Stavelot by Abbot Wibald, diplomat, politician and counsellor to the Holy Roman Emperor, Frederick Barbarossa.

Three plaques, perhaps from an altarpiece or shrine, Mosan, c.1150-70
Copper gilt with champlevé and some details in cloisonné.

The scenes depicted are: (a) a man on a camel (b) Samson and the lion (c) the Ascension of King Alexander to the Heavens.

The three plaques are of outstanding interest both technically and iconographically. They are brilliant examples of the art of enamelling as practised in the twelfth century in the area around the Meuse (now in Belgium), centred on the bishopric of Liège. The boldly engraved figures are enriched by a subtle range of enamel colours, often blended to emphasise figure contours or drapery folds. Prominent features such as heads and hands are not enamelled but engraved and gilded. Mosan enamellers were amongst the most skilled craftsmen of their time, and produced items for liturgical use - crosses, altars, reliquaries and candlesticks - numbers of which survive.

At least two of the Rolls plaques appear, most unusually, to be secular in subject, one derived from the medieval Romance of Alexander. In this Alexander the Great explores the sky in a chariot pulled by griffins lured upwards by a baited pole. The meaning of this subject depended on its context and it could variously symbolise pride or faith. As with many medieval works, nothing is known of the identity of their artist, what object they adorned, or who commissioned them. Similar plaques, possibly from the same group, have been identified at the British Museum (Namaan bathing in the Jordan); New York, Metropolitan Museum (the Baptism, the Crucifixion, the Holy Women at the Tomb, Pentecost); Paris, the Louvre (a Centaur with a bow and arrow, a youth killing a dragon and Saints Sebastian, Tranquillinus and Livinus).

The Rolls plaques, like those in the Louvre, are unusual in their inclusion of seemingly secular imagery. It is likely that the group formed part of a larger scheme - such as a large altar-piece - which might have combined religious subjects alongside secular scenes, which would have carried allegorical significance. Although it has been suggested that the plaques formed part of Abbot Suger’s famous enamelled altar cross, this seems unlikely as the decoration of the cross probably focused upon Christ’s Passion and Resurrection.

The plaques are stylistically and technically very close indeed to a semi-circular enamel now in the British Museum, which shows Henry of Blois, Bishop of Winchester (d.1171) holding an altar. It seems possible that all the plaques originally adorned one of his gifts to his cathedral at Winchester, perhaps a great altar-piece which would have been destroyed in the 16th century Dissolution upheavals. 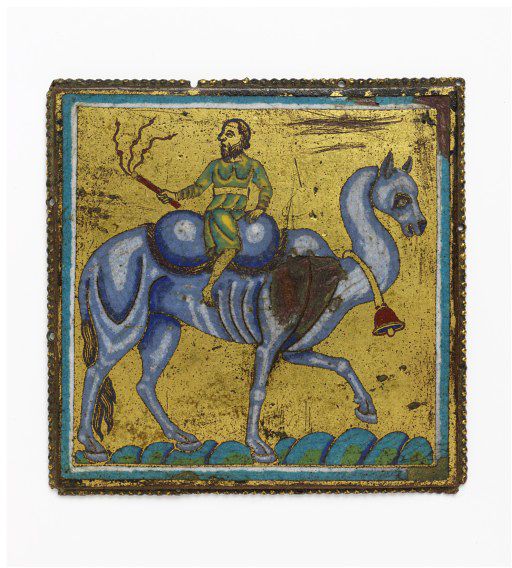