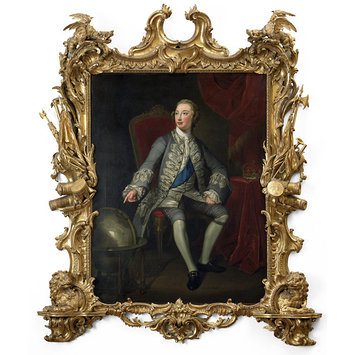 George III when Prince of Wales

Object Type
By the mid-18th century, the picture frame had acquired an importance of its own. The carving served as an extension of the painting. The military trophies and emerging lions reflect the status and education of the young heir to the throne. The portrait is a contemporary copy from a large group showing Frederick, Prince of Wales and his family.

People
This portrait may have been presented to Thomas Osborne, 4th Duke of Leeds (1713-1789) by George III. It hung in the Dining Room at Hornby Castle, Yorkshire until 1930. The frame is attributed to the London workshop of Paul Petit (active 1724-1757), based in the parish of St. James's, Piccadilly, and may have been carved by his assistant Henry Jouret. Petit was of Huguenot descent, and worked both as a carver and gilder. He also supplied elaborate picture frames for portraits at Warwick Castle, where they can still be seen today.

Design & Designing
This frame was one of a pair which hung in the Dining Room at Hornby Castle, North Yorkshire. The elaborate carving was designed by the craftsman, probably in consultation with the portrait painter. The carving is enhanced by the water gilding (a method in which gold leaf is applied to a damp gesso surface), with its highly burnished raised surfaces contrasting with the duller backgrounds.

The portrait is painted in oils on canvas. The rectangular frame is carved with rococo ornament composed of 'C' scrolls, acanthus leaves and flame ornament with military trophies, two winged dragons, two demi-lions and a lion pelt. The crest of the frame has a scroll pediment and hissing dragons emerging from the corners. on the proper left is a trophy composed of a mortar, cannon, kettledrum, trumpet, hautboy, halberd and a furled colour; the proper right trophy consists of a reversed mortar decorated with a crown, a cannon, kettledrum, musket, fasces, furled colour and a leading staff; the base of the frame has two demi-lions emerging from the corners, supported on scrolling brackets and in the centre, a small lion pelt. The top and side sight edges are carved with egg and dart.

This portrait may have been given to Thomas Osborne, 4th Duke of Leeds ( 1713-1789) by George III. It is recorded in the Dining Room at Hornby Castle, Yorkshire. It was sold at Sotheby's London 20 October 1972 lot 64, illustrated plate IX; bought by Frank Partridge.

Frame almost certainly carved in the London workshop of Paul Petit (active 1724-1757); painting based on a detail from a larger group portrait by George Knapton (born in 1698, died in 1778). Painted in London.

Historical significance: Amongst the most elaborate pieces of high rococo frame carving known in England; this frame retains most of its original gilding. It can be attributed to Paul Petit, a carver and gilder who worked for Frederick, Prince of Wales from 1732 to 1749. Paul Petit's assistant Henry Jouret continued on his own account until at least 1760 and it is possible that this frame was carved by Jouret rather than Petit himself.

Portrait of George III as Prince of Wales, after George Knapton, in carved giltwood frame attributed to Paul Petit, circa 1751

The portrait, after G. Knapton, is of George III when Prince of Wales; it is a replica taken from a large group of the family of George III's father, Frederick Prince of Wales, at Marlborough House, painted after his death on 20th March, 1751. The frame is attributed to the carver Paul Petit, who worked for Frederick, a supporter of the Rococo style in the 1740's. [pre October 2000]
British Galleries:
This is one of the most elaborate English carved Rococo frames to survive. The exceptionally bold carving features animals, scrolls and foliage typical of the Rococo style, as well as military trophies. It was almost certainly carved in the workshop of Paul Petit. Petit had produced several elaborate frames for George's father, Frederick, Prince of Wales, an avid promoter of the Rococo in the 1740s. [27/03/2003]

Attribution note: The portrait is a replica taken from a large group of the family of George III's father Frederick, Prince of Wales which was painted by George Knapton after his death in March 1751 and hung at Marlborough House.
Reason For Production: Commission 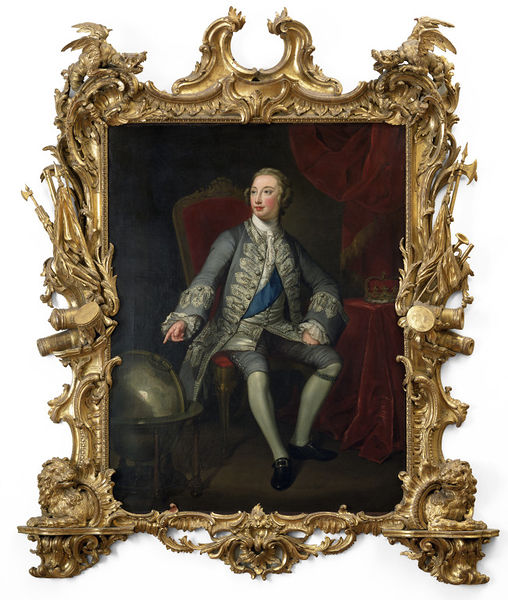