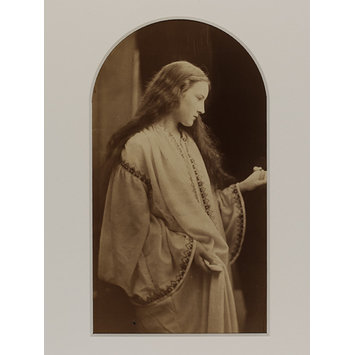 Julia Margaret Cameron accepted and even embraced irregularities that other photographers would have rejected as technical flaws. In addition to pioneering the use of soft focus, she scratched into her negatives, printed from broken or damaged ones and occasionally used multiple negatives to form a single picture. Although criticised at the time as evidence of ‘slovenly’ technique, these traces of the artist’s hand in Cameron’s prints can now be appreciated for their modernity.

Cameron was not uncritical of her work and strove to improve her skills. She sought the opinion of her mentor G.F. Watts, but at his insistence sent him imperfect prints for comment, reserving the more successful ones for potential sale. Cameron sent this photograph to Henry Cole to show the ‘cruel calamity which has over taken 45 of my Gems – a honey comb crack extending over the picture appearing at any moment and beyond any power to arrest’. She blamed her ‘fatally perishable’ photographic chemicals, while members of the Photographic Society suspected the damp climate of the Isle of Wight. Today’s theory is that she did not sufficiently wash the negatives after fixing them.

A photograph of a standing woman (Hatty Campbell) wearing a loose gown and with long hair seen in profile.

Cameron sent this photograph to Henry Cole to show the ‘cruel calamity which has over taken 45 of my Gems – a honey comb crack extending over the picture appearing at any moment and beyond any power to arrest’. She blamed her ‘fatally perishable’ photographic chemicals, while members of the Photographic Society suspected the damp climate of the Isle of Wight. Today’s theory is that she did not sufficiently wash the negatives after fixing them. 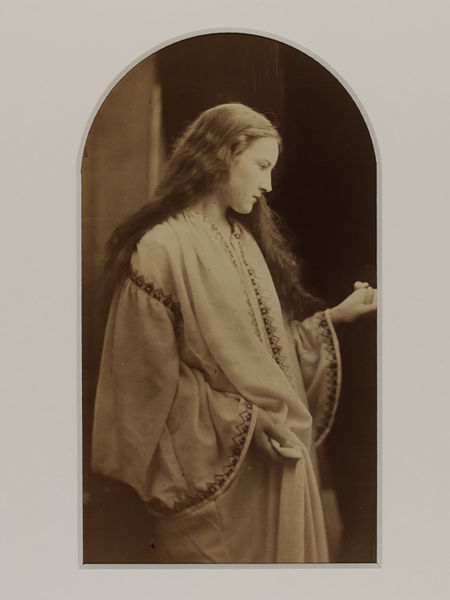