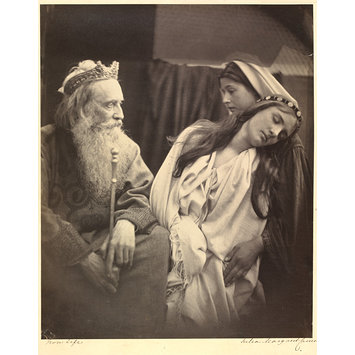 This is one of Cameron’s more theatrical depictions of a biblical subject. It shows the moment when Queen Esther faints after begging King Ahasuerus to spare the Jews he has sentenced to death. The makeshift costumes, backdrop and props – including the fireplace poker that serves as a sceptre – evoke the amateur theatricals and tableaux vivants that were popular in Victorian Britain.

A photograph of a seated man with crown (Henry Taylor) holding a staff. His gaze is directed toward two women (Mary Ryan and Mary Kellaway), one is draped in cloth and appears to have fainted and is being supported by another woman seen in profile with draped head.

Julia Margaret Cameron (1815-79)
‘King Ahasuerus and Queen Esther in Apocrypha’
About 1865
This is one of Cameron’s many depictions of Biblical
subjects. It shows the moment when Queen Esther
faints after begging King Ahasuerus to spare the Jews
he has sentenced to death. The makeshift costumes
and backdrop evoke the amateur theatricals and
tableaux vivants that were popular in Victorian Britain.

This is one of Cameron’s more theatrical depictions of a biblical subject. It shows the moment when Queen Esther faints after begging King Ahasuerus to spare the Jews he has sentenced to death. The makeshift costumes, backdrop and props – including the fireplace poker that serves as a sceptre – evoke the amateur theatricals and tableaux vivants that were popular in Victorian Britain. 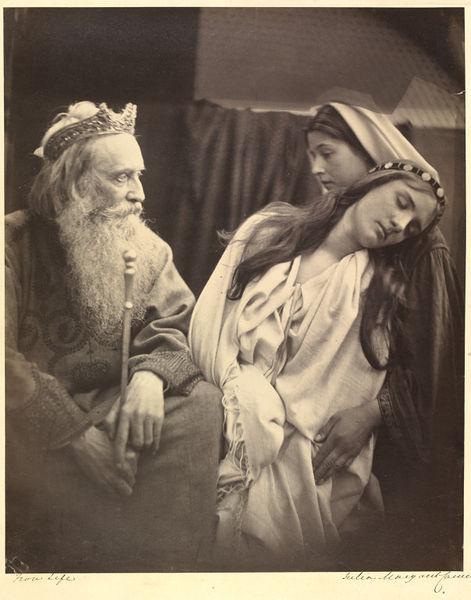