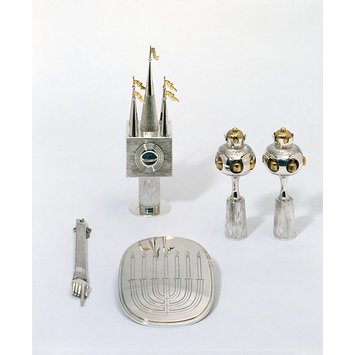 In Judaism the Torah (the scroll containing the Pentateuch, the first five books of the Hebrew Bible) is usually decorated with either a crown or a pair of finials. These are known as 'rimmonim' (pomegranates).

Some rimmonim, as here, are decorated with bells to draw attention to the reading of the Torah and also as a reminder of the bells on the robe of the High Priest of the ancient temple of Jerusalem.

These rimmonim form part of a miniature Torah set made by Professor Gerald Benney. Though not Jewish himself, Benney began to make Jewish ceremonial objects in the 1960s, using a contemporary style.

One of a pair of rimmonim, for use with miniature Torah scroll. Of bulbous cupola form with six silver gilt bells and above a silver gilt crown finial. Textured baluster stem.

Contemporary Judaica in Britain
Judaica has always reflected the artistic styles of its time. In the late 19th century ceremonial silver was available through large companies such as Joseph & Horace Savory and cherished pieces were brought into England by the Jews who had fled the pogroms in Eastern Europe. In the first half of the 20th century the two world wars and the Holocaust meant that little Jewish silver was produced. It was not until Jewish communities had become more established that synagogues began to commission new work. The designers were often non-Jewish, as was Professor Gerald Benney, the eminent silversmith who began to make ceremonial objects in contemporary styles in the 1960s. More recently a new generation of silversmiths, including Tamar de Vries Winter, have continued to make ritual objects. Their work has enabled traditional Jewish religious customs and practices to be fulfilled in a modern style.

Torah Set
The distinctive style and simple lines of this miniature Torah set are a departure from the forms of traditional Judaica. The silversmith, Professor Gerald Benney, is not Jewish himself but he began to make Jewish ceremonial objects in the 1960s, using a contemporary style.

The scroll was made in the 19th-century. It contains the Pentateuch (the first five books of the Bible) and is wound onto rollers called the Trees of Life, a reference to the biblical verse 'She [the Law] is a Tree of life to them that lay hold upon her; and happy is everyone that retaineth her' (Proverbs 3, 18).

The breastplate or Torah shield (Tas) is hung from the staves of a Torah and is engraved with a menorah (the Hebrew word for a seven-branched candelabrum), a traditional emblem of the Jewish people. The rimmonim (pomegranates) fit on top of the staves. The mantle is embroidered in Hebrew 'Ezer, son of Mordekhai'. The pointer, or yad (hand) is used by the reader to follow the sacred text. When not in use, it is hung by a chain over the Torah breastplate.

The spice box is used during the Havdalah ceremony that marks the end of the Sabbath, the holy day of rest. The spices are blessed and the box is passed around for all to smell. After the ceremony, the new week starts. 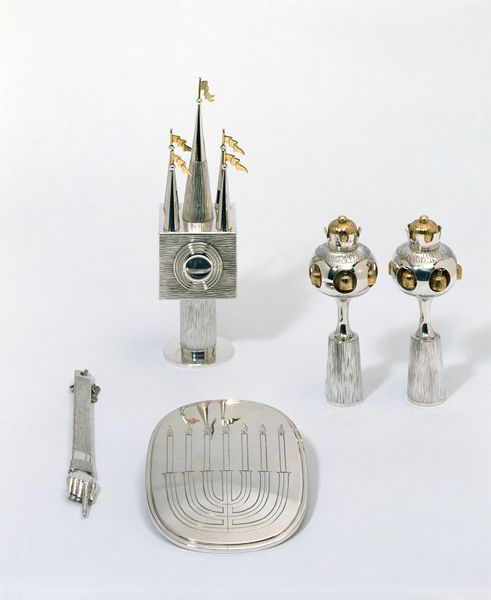