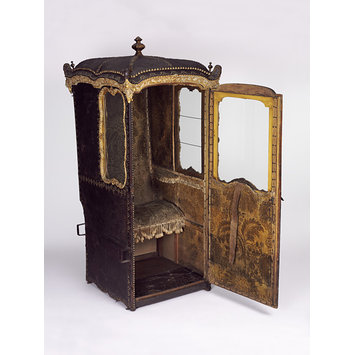 The sedan chair was a popular form of non-wheeled transport in Europe until the 19th century. It was fitted with a seat for one person, and was carried by two or four chairmen (depending on the occupant's weight), who lifted it using two long poles that slotted into brackets on the side of the chair, attached to leather straps that hung round the chairmen's necks. Sedans were particularly useful for travelling through cities with narrow streets. This sedan chair was probably made in Piedmont / Savoy in Italy. Several similar chairs of about the same date survive in Italy, France and the UK, including one at Westminster Abbey which was bought in Rome in the early 19th century.

The exterior of the sedan chair is covered with black leather. There are three windows, one in the door and one on either side. Brass round-headed studs are arranged in decorative patterns around the windows and follow the outline of each side of the chair, at the same time forming a girdle round the chair about half way up; they are mainly arranged in groups of six and nine. The mouldings of the window frames are of serpentine form, of wood carved, gessoed, gilded and painted with a Régence pattern. The painting and oil gilding has been renewed by the Museum. The glass in each of the windows, all replacement, is set in a movable wooden frame. The front window is made to drop downwards, into the body of the door on a strap punched with several holes that can be hooked onto a tack attached to the inside of the chair door just below the window.The window strap is stamped and gilded and may be an early 19th century replacement. The side windows slide back, and the glass in these two windows is protected by two thin metal horizontal wires (possibly 19th century). The door itself is designed to be completely removeable and can simply be lifted off its hinges.

At each side of the chair near the base are two iron brackets (known as pole lugs), back and front, to accommodate carrying poles (the poles are modern). The rear two of these may not be original. The roof, the shape of a shallow umbrella, has eight radiating struts, which are also decorated with brass studs arranged in rosettes. The four corners of the roof are upturned into a scroll formed of laminated leather, the back right-hand one of which is bent over. Immediately below them are carved wooden female masks, painted. Behind each corner scroll, on the roof, is a brass finial, triangular in section. The central finial is a replacement, of carved wood, made by the Museum in 1968. The whole roof is surrounded by large brass studs, and below is a carved wooden cornice, with gadrooning and scrollwork. On three of the four sides of the chair, just below the roof, is a small iron loop: originally large tassels would have hung from these, but they do not survive.

The interior is, except for the floor, lined with pale olive green (perhaps once saffron yellow) stamped woollen velvet on a linen warp, with a floral design with a very large repeat. The seat has 22 inch width, the standard width for a handloom. There are two small padded arm rests. These and the base of the padded seat, below the windows, and at the base of the roof are trimmed with pale olive-green fringing, of cord with floss tassels, and braiding 1.6 inches wide, in linen woven with a diamond pattern. Originally there would have been a valance hanging from the seat down to the floor, hiding the area under the seat which was often used for storage or for a heater. The stuffing of the seat is probably horsehair. Under the seat the walls appear to be relined at the back and sides.The velvet on the underside of the roof is held in place by nailed tapes and the pattern is not symmetrically placed. The wooden floor has a leather mat, nailed in poisition with brass-headed nails in a decorative pattern of symmetrical scrolls. This is much worn and the leather outer covering of the sedan chair is torn in places on the door.

Externally, the back of the chair curves inwards at the base to allow space for the rear carrier to walk. This shape is characteristic of sedan chairs made in Piedmont / Savoy. The carved decoration and shape of the roof is reminiscent of French carriages dating from the early 18th century. The style of the carving seems to be that of the 1720s, but is of a style that continued to be used for the decoration of sedan chairs for several decades.

The frame of the chairs is probably poplar, which is a light wood to carry, with some walnut. It is of crate-like construction, with the visible coverings stretched between the framework. Parts of the wood panel of the seat have been renewed. On the back of the exterior there is an arched panel of repaired leather.

Italy (probably, made)
Piedmont (possibly, made)

When acquired by the Museum in 1966, the sedan chair was thought to be French, 1720-40. It was later catalogued again as French, c.1725. In 2004 the sedan chair was examined by the independent sedan chair specialist Stephen Loft-Simson, who proposed a new attribution of Italy, probably Piedmont / Duchy of Savoy, mid 18th century, on the basis of similarities with other surviving chairs. He described this particular style of chair as lasting from c.1720-75, with several other examples surviving that share the carved female heads on the corners. Mr Loft-Simson returned to view the chair again in June 2014 and reiterated this opinion. According to his studies of numerous surviving sedan chairs, the north Italian attribution is supported by the shape of this chair, its relatively tall height and the height of the pole lugs from the ground (14").

Around 40 sedan chairs of this type are known to survive, including comparable examples in Milan, Turin, Chambéry, Manta and Northampton as well as other, plainer versions. A rare example of a documented sedan is now in Westminster Abbey but was made by an Italian maker, Pietro Fabris, c.1735-40, and was bought in Rome in 1826. A French sedan chair dated to 1750-75, sold at Christie's in June 2007, shares a similar shape (although rather more severe, in keeping with the nascent neoclassical style) and construction to W.10-1966, supporting Mr Loft-Simson's thesis that the style of sedans remained the same over a relatively long period.

The sedan chair was restored by the V&A in 1968. At this date the torn leather was repaired and the woodwork repainted white, heightened with gilding. According to Mr Loft-Simson, W.10-1966 is the only sedan chair with this combination of gilding and a white background, so it is possible that this restoration may not represent the original decorative scheme. Also in 1968 carrying poles were made, as was a replacement central finial for the roof, as this was missing. It was made in wood, gilded and toned to resemble brass. According to Mr Loft-Simson, it should be metal and should be smaller than it is, as other surviving examples bear a central finial of the same size as the corner finials.

As part of this same restoration the leather body sides were removed for treatment, the studs were removed, straightened and re-inserted, though many broke in the process and were matched with other studs. The interior was cleaned, bonded and tacked back into position where falling away. Since the front drop-slide window was not original, a new shaped frame was designed, fitted and glazed. According to Mr Loft-Simson the frame shape of this replacement front window is not quite correct.

In November 2013 Clare Browne dated the stamped wool velvet upholstery of the interior to 1730-35. Such stamped wool velvets are usually considered Dutch, but it is possible that they may also have been produced in northern Italy. In June 2014 Clare saw a sedan chair with identical upholstery in the Centre Charlemagne, Aachen. The valance to the seat is missing: this would have hung down from the front of the seat, covering the void under the seat which would have been used for storage or for a heater of some sort. The front glass pull string should apparently be coloured fabric or braiding to match the textile interior, rather than leather.

A wealthy customer might have used this opulent sedan chair when shopping for luxuries. Seated in comfort among the rich patterned velvet, tassels and gilded wood carvings, the passenger would have been carried from shop to shop. The two servants carrying the chair would ensure that their master or mistress was insulated from the grime of the streets, which were often unpaved and dirty.

In the 18th century, city streets were often mucky. Rich people who didn’t want to get their delicate shoes dirty might travel around in these special chairs. Two men lifted the chair up and carried it along using two poles. 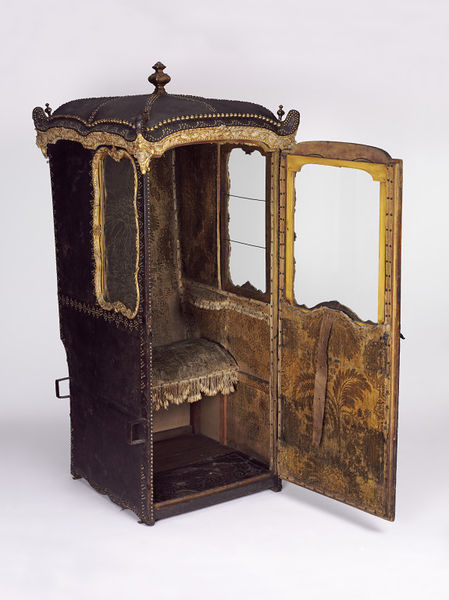