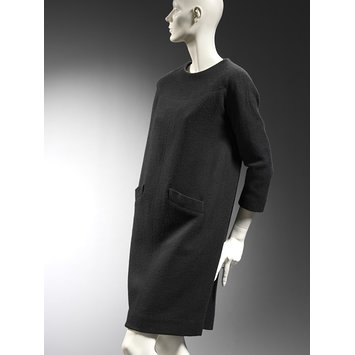 Balenciaga was the most exclusive fashion house in Paris immediately after World War II. The Spanish-born couturier Cristóbal Balenciaga (1895-1972), regarded by his peers as ‘the Master’, had moved to Paris from Spain in 1937. By 1952 he had 232 employees there and was producing 356 new designs per year. His clients, admitted to his salon only after a personal introduction, included many cosmopolitan women of different nationalities.

In the 1950s, Balenciaga’s designs became increasingly pared down, foreshadowing the simple geometry of 1960s fashion. In 1957 his 'sack' line created a stir, because it was so radically different from the constricting hour-glass shape that dominated fashion. This example shows how the dress hangs suspended from the shoulders like an envelope around the body, letting it breathe. For many, the first version of the sack was too radical, and in succeeding years, the designer reduced its fullness. It had a certain longevity, the skirt of this example being shortened by 7cm in the 1960s to bring it in line with new fashions.

Dress of black, loosely-woven wool in a stiff 'sack style'. Its round neckline sits slightly above the wearer’s chest. It has narrow, diagonal inset pockets at waist-level, faced with wool. The three-quarter-length sleeves are cut in one with the yoke. There is a two-piece gusset under either arm. There is a centre front and back seam and side panels. It fastens at the back with a centre zip, with a hook and eye at the top.

Inside, it is loosely lined with black silk, the construction of which closely imitates that of the dress. The zip is backed with a black silk tape which fastens to the opposite closure with a popper. The neck, sleeves and hem are faced with the same woollen fabric from which the rest of the dress is made. All are finished with a piping of black silk. At each shoulder is a short strap with a popper to hold the dress in place on the wearer’s undergarments.

The hem has been taken up.

66570
Number hand-written on back of label

THE UNSEXY SACK
‘It’s Hard to be Sexy in a Sack!’ cried the Daily Mirror in 1957. Balenciaga’s ‘sack’ dress shocked when he first presented it in the late 1950s. Its straight line contrasted sharply with the still dominant hourglass shape favoured by his main competitor, Christian Dior. In eradicating the waist altogether, Balenciaga anticipated the popular shift dresses of the 1960s.

In the 1950s, Balenciaga's designs became increasingly pared down, foreshadowing the simple geometry of 1960s fashion. He created free-standing structures suspended from the shoulders, rather than a constricting carapace closely fitted to the bust and waist. Sleeves were a particular obsession, and in this 'sack' dress he has cut them in one with the yoke. 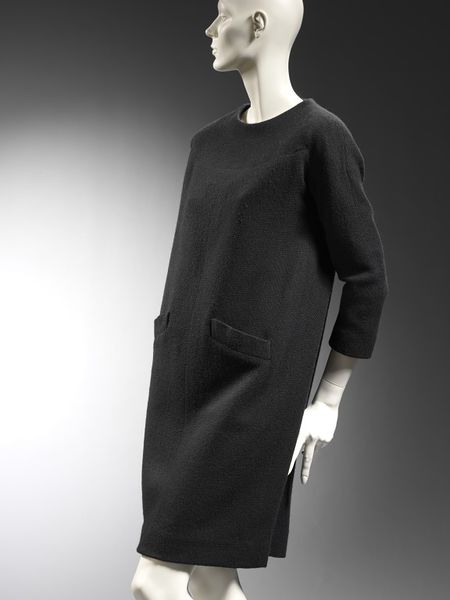