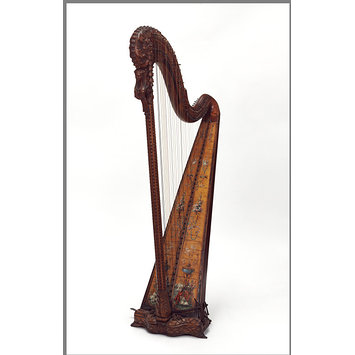 Jean-Henri Naderman (1735–1799) was one of the leading harp-makers in Paris of his day, and he supplied the Royal Household with his instruments. This harp was made in 1787 for a certain Mme de Binet (née Honteloup) of Dieppe, possibly as a wedding present, and was fitted with a series of holes and shutters in the back of the sound box. These were part of a short-lived device, invented in 1785 by the harpist Jean-Baptiste Krumpholtz (1740–1790) so as to vary the volume of the harp. Not only was this harp fitted with the latest mechanical gadget, it was also highly progressive in its decoration. The figure with an Egyptian headdress was carved on it more than twenty years before the vogue for all things Egyptian became widely fashionable at the time of Napoleon’s military campaigns in Egypt.

'Back of seven undecorated ribs, five of oak, two sycamore. The five soundholes in the back can each be closed by a shutter, the five shutters opened and closed together by a link, now missing, which was connected to one of the eight pedals. Pine belly, painted with doves, vases of flowers and tripod perfume-bearers amid musical instruments (trophies taken from Delafosse's Sixth Livre de Trophies d' Amour et de Musique, p.3). The handsomely carved pillar and neck are in plain birchwood, and at their junction is a scroll carved with leaves and a female head in Egyptian head-dress'.

M. de Binet née Honteloup / à Dieppe
Mme de Binet (nee Honteloup) in Dieppe.
Inscribed on the inside of a detachable piece of wood, the other side of the tuning mechanisms.

Restrung and cleaned by Mr Morley, 1963.

Pedal Harp
French (Paris); after 1785
By H. Nadermann, one of the leading harp makers in Paris at the time

It is fitted with a new device (holes with shutters at the back) intended to produce a swell-box effect, invented by Krumpholtz in 1785. Note the use of an Egyptian motif to decorate what is not only a fine musical instrument but also a piece of fashionable Parisian furniture - at a date, incidentally well before Napoleon's invasion of Egypt which was to give special impetus to the use of Egyptian ornament. The painted trophies on the belly are after an engraving by J. C. Delafosse. published in his sixth 'Livre de Trophées d'Amour et de Musique'.

Similar painted decoration by the same hand is found on other Parisian harps of the period, indicating that there was a painter to whom several of the leading Parisian harp-makers turned when they wanted their harps decorated. The same may be said of the cared decoration on the heads of such harps, many of which were clearly executed in the workshops of a carver who specialised in such work. 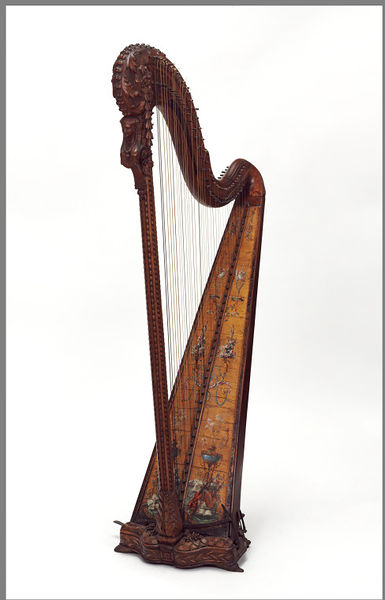