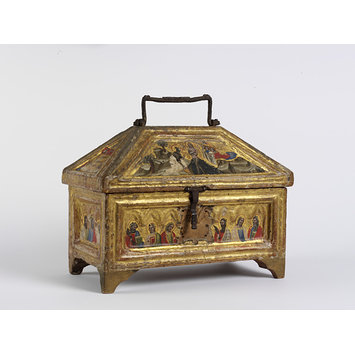 Simone di Filippo called ‘dei Crocefissi’ (active in Bologna between 1355 and 1399) was perhaps a pupil of Vitale da Bologna (before 1309-1359-61). He was the father-in-law of the painter Dalmasio de’ Scannabecchi and was elected a member of the Elderly for the Porta San Procolo district in 1380. Very little is known about his work.

This casket is lavishly decorated with various saints and scenes from the life of St John the Baptist. It is characteristic of Gothic painting done in Bologna around 1350, and it was probably made for a member of the Baisi family of Bologna who was a bishop or priest. The same coat of arms is painted at both ends of the lid, and emblazoned with a bishop’s mitre and crozier, and with the crossed keys of St Peter.

Wood; covered with gesso, gilt and painted. On the lid is depicted the birth of St John the Baptist, and the Baptism of Christ on the Front Side, saints and apostles on the front, back and sides of the box. On both ends of the lid is the same coat of arms for a bishop, probably the Baisi family of Bologna (three fishes in pale, with mitre, cross keys and crosier).

Names of saints on casket

This box was purchased by the South Kensington Museum in 1864 from M. Delange of Paris for £20.

Historical significance: Originally acquired as Florentine, this casket has been attributed to Simone dei Crocefissi by John Pope-Hennessy (oral communication), an attribution supported by Peter Thornton (1984).
Characteristically shaped like a Medieval Italian tomb, this casket shows on a gilded background with eroded pastiglia work the half-length figures of the apostles (St Peter, St John the Evangelist, St Bartholomew, St Matthew) and two unknown saints as well as the four evangelists, St Christopher, St Anthony Abbot and St Liberius. On each ends are three apostles with a coat of arms: three fishes in pale, probably those of the Baisi family of Bologna while the mitre, cross keys and crosier allude to a high clerical charge such as bishop.
Caskets were part of the medieval household to store precious items such as books and papers but may also have had an ecclesiastical use by storing bibles, small liturgical utensils and even reliquaries. The present casket was probably indeed decorated according to an ecclesiastical purpose.
The figures of the saints bear the characteristic features of Simone dei Crocefissi’s output. Many works, preserved in the Pinacoteca Nazionale, Bologna, can be compared with the present works, especially a Crucifixion of Christ from ca. 1370 (Inv. 286). This Crucifixion displays very similar figures, perhaps more refined, whose features are strongly outlined with a heavy black line.
Its decoration would have made it a rare and much prized item. The owner was most likely from Bologna, a city that had a flourishing school of illuminators and miniaturists, such as Andrea da Bologna (fl. 1370s) and the presumed author of the present decoration Simone dei Crocifissi. At this time and until the High Renaissance, decorating furniture was as much part of an artist’s activity as painting altar-pieces and illuminating manuscripts.

A casket is a very small case or lidded box for storing various objects and were popular from the 4th century AD. Usually made of ivory or wood, caskets were used for storing important books and papers, liturgical utensils and various precious items. They were utilised by both the secular and the ecclesiastic worlds, For example, bible boxes were used by both ecclesiastic and lay owners for storing Bibles. They were particularly common in the Renaissance and made of wood, usually walnut or oak, with either a flat or a slanting hinged lid. Somehow they can be seen as the precursor of the much larger Italian cassone and were most of the time lavishly decorated.

A Gilt and Painted Gesso Casket

In addition to the more usual reliquaries of gilt or precious metals, wooden caskets (cassette) sometimes in the form of a Gothic tomb were used in Italy and elsewhere during the Middle Ages for preserving relics and other sacred objects. The original poverty of the material was atoned for by lavish embellishment with stucco reliefs, or, as in this example, with gilt and painted gesso. But owing to the perishable nature of the decoration such caskets are relatively rare; and few of those which survive have escaped restoration.

There was a ﬂourishing school of illuminators and miniature painters at Bologna in the fourteenth century and these artists often worked on the decoration of ecclesiastical and domestic furniture. The painting of this casket suggests a Bolognese origin and is reminiscent of the work of such artists as Andrea da Bologna (fl. c. 1370) and Simone dei Crociﬁssi (fl. 1355-99).

On the lid is depicted the Birth of St. John the Baptist, with the Virgin Mary holding the infant at the bedside of St. Elizabeth, their names inscribed above. On the other (front) side is the Baptism of Christ. The arcaded niches below contain ﬁgures of evangelists, apostles and other saints, their names sometimes obliterated; on the front are SS. Peter, John the Evangelist, Bartholomew, Matthew and two other apostles; at each end three apostles; on the back, below the Birth of St. John, the four evangelists (represented with wings), SS. Christopher, Anthony of Egypt, Liverius and a Pope. The coat of arms painted at each end of the lid (or three ﬁshes naiant gules, on a chief gules crossed keys between a mitre and a crozier-head argent) has not been identiﬁed, but presumably indicates that the casket was ordered for a Bishop or Abbot. It was purchased for the Museum in 1864.

'Box or Coffer. Gilt wood; a 'chasse' or reliquary; with painted panels, showing scripture subjects and half-lenght figures of saints. Italian, Florentine. About 1300. H. 9 1/4 in., L. 13 in., W. 6 ½ in. Bought, 20l.
This is one of numerous reliquaries painted by the leading artists of the 13th, 14th, and 15th centuries, in Italy, and specially Florence. Numbers may still be seen in the sacristy of S. Mark, the work of Fra Giovanni Angelico -some of his finest productions. The wood is cypress, chosen on account of its preservative qualities, and the surface prepared with gesso, or plaster and size, till a good bed is made for gilding and painting. This gives lustre to the gold, which can then be burnished and tooled with bookbinders' implements. I this instance the reliquary is in the form of a small mediaeval tomb, roofed and formed into panels on the sides, and in the four roof gables. These latter are painted on one side with the Visitation; St. Elizabeth is represented in her bed, and the infant Baptist in handed over to the Blessed Virgin, who stands at her side. This is a variation of the traditional treatment of the age in which it was executed . We have, however, on the mouldings of the panel, in red Gothic letters, the names of the personages. The opposite side represents the baptism of Christ. On the end gables are shields, supported by flying angels: or, three fishes gules; in chief, St. Peter's keys, between a mitre and crozier head. This has been made for the Prior of a convent. On the side and end panels are, under niches which form part of the gilded woodwork, a row of demi-figures of various saints. The apostles and evangelists, SS. Gregory, Antony Aboot, Christopher, and others. These have all had their names written on the edge of the moulding below, in vermilion, but in most instances they are but partially legible. The painting is of the school of Giotto. Some of the heads are worthy of the master himself, and remind us of his works at Florence.'

On the front of the lid is the Baptism of Christ and on the back the birth of St John the Baptist. At the sides of the lid are the arms of the Baisi family of Bologna. The name of the owner is unknown but the crossed keys and crosier indicate that he was a bishop. On the front and side of the box are half-length apostles and saints. [Pre-2006] 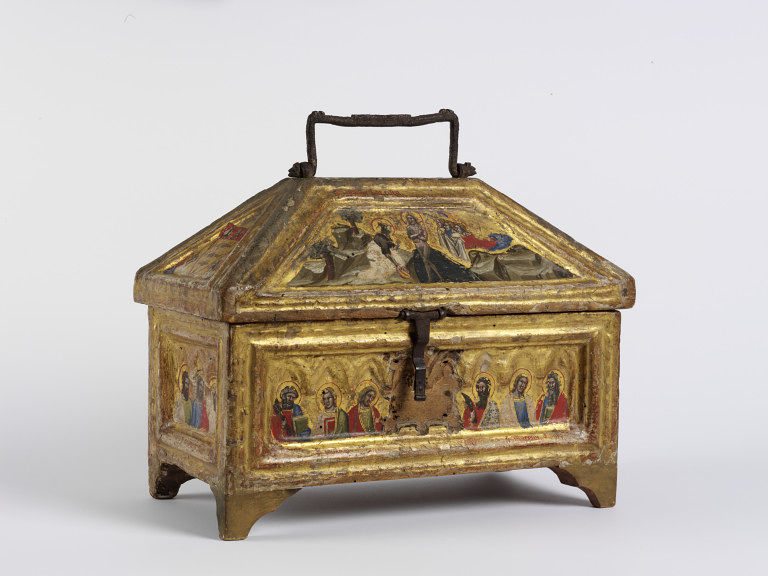