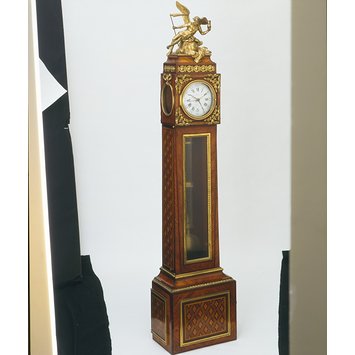 Robert Robin, the maker of this clock, was one of the most celebrated clockmakers in 18th-century Paris. He was clockmaker to Louis XV and continued to produce his finely engineered movements even after the French Revolution of 1789. In Paris at that time, the different trades were tightly controlled by the guild system and Robin did not make the wooden cases of his clocks. This case is stamped ‘B. LIEUTAUD’, the mark of the cabinetmaker Balthazar Lieutaud, who worked frequently with Robin.

Several cases of this shape exist, each with slightly different decoration in marquetry and gilt bronze. Some show figures of Apollo and his chariot as the cresting decoration at the top. Others, like this one, use the figure of Father Time with his scythe. This clock would originally have been slightly higher, with a low plinth section below the base.

Calendar equation regulator (régulateur), the case veneered in tulipwood and other woods on a carcase of oak, the front face of the base with a panel of lozenge marquetry, the case mounted with gilt-bronze mounts, including the figure of Time, with his scythe, as a cresting. The dial and dial plate are marked 'Robin a Paris' and the case is stamped four times with the stamp B.LIEUTAUD. The clock is missing its base, but a replacement base was made by the Museum in 2015, for display.

Tulipwood and other woods on a carcase of oak, set with a marquetry panel and with gilt-bronze mounts; the movement of steel and brass; the dial enamelled black on white

Robin a Paris
On dial and dial plate

Barbezat
On reverse of enamel dial. This is the mark of the enameller Elie Barbezat.

LESIEUR 1817
Scratched on the underside of the dial plate. Probably the mark of a repairer.

Acquired by John Jones before 1882

Longcase clock (Régulateur) of tulipwood and other woods veneered on oak, the case set with gilt-bronze mounts, including a figure of Chronos (Father Time), the dial of white enamel

The clock-case is severely rectilinear in outline, and most of its decoration is geometric. This combination is characteristic of much French Neoclassical furniture of its time. Other decoration includes cast laurel leaves and bands of guilloche ornament (flower heads encircled by bands). These were copied from classical architecture. The figure of Time, however, was a type common in art of the period. 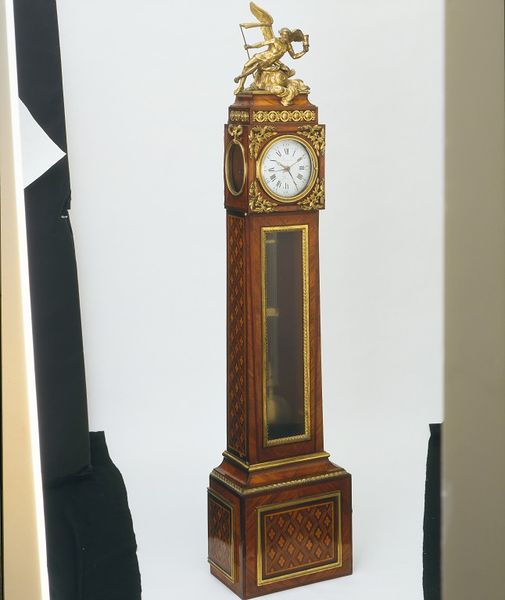