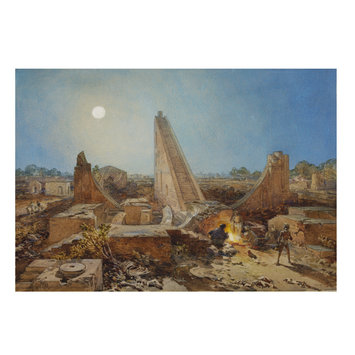 William Simpson was born on 28 October 1823 in Glasgow. Following a seven-year apprenticeship with a specialist lithographic firm, he moved to London in February 1851 and found employment with Day and Sons. In 1859 the firm commissioned Simpson to visit India and make drawings for a book illustrating well-known places associated with the 1857-58 uprising. Thus began Simpson's long association with India, and the first of his four visits to the subcontinent over the next twenty-five years.

During these journeys he made numerous rapid pencil drawings in sketchbooks, often heightened with colour washes. Many formed preparatory studies for his finished watercolours, most of which he worked up after returning to London. The plan was for Day and Son to select 250 of these finished watercolours to be lithographed as illustrations in the projected volume. While Simpson was away in India, however, Day and Son had been drifting into debt. In 1867, before it finally went into liquidation at the end of the year, he was made a company shareholder as part payment. But, as he expressed it, 'the great work on India, on which I bestowed so much time and labour, never came into existence'. Two years later, Simpson's collection of 250 watercolours was sold off as bankrupt stock: 'This was the big disaster of my life', as he ruefully remarked.

This painting depicts the Observatory in Delhi by moonlight. It was built in 1725 by the astronomer Raja Swai Jai Singh and consists of four main instruments, two having the main functionality of time measurements, and two meant principally for celestial co-ordinate measurements for the sun, moon, planets and stars.

The observatory by moonlight. In the foreground there is a small fire around which are gathered a dog and two figures.

Pencil and watercolour on paper

William Simpson was commissioned to go to India by his employers, Day and Sons, the London lithography firm. Having established his reputation by documenting the Crimean war in 1854, he was instructed to sketch well-known sites in and around Delhi associated with the heavy fighting of 1857.

Simpson arrived in Calcutta (Kolkata) in 1859 and travelled widely. His rapid pencil drawings formed the preparatory studies for his finished watercolours which were done after his return to London in 1862. His fond memories of India, as noted in his journal, resulted in these highly coloured, evocative and romantic interpretations of the Indian landscape.

Simpson, a largely self-taught artist from a poor family in Scotland, had hoped to achieve fame on the publication of his paintings in a lavishly illustrated volume. Unfortunately, financial problems led to the poorly printed India Ancient and Modern containing only fifty images. Simpson called it the ‘big disaster’ of his life.

The V&A has the single most important collection of watercolours made during Simpson's first expedition to India.

Painting of the Observatory at Delhi. by William Simpson, watercolour on paper, India, 1864

The Observatory was built in 1725 by the astronomer Raja Jai Singh of Jaipur to measure time as well as provide co-ordinates for the sun, moon, planets and stars. This is one of Simpson's most romantic paintings. The ruins of the Observatory are viewed by the light of the moon, and the scene is animated by the orange flames of the fire which draw attention to the figures and the dog, creating a highly atmospheric mood. [1/12/2008] 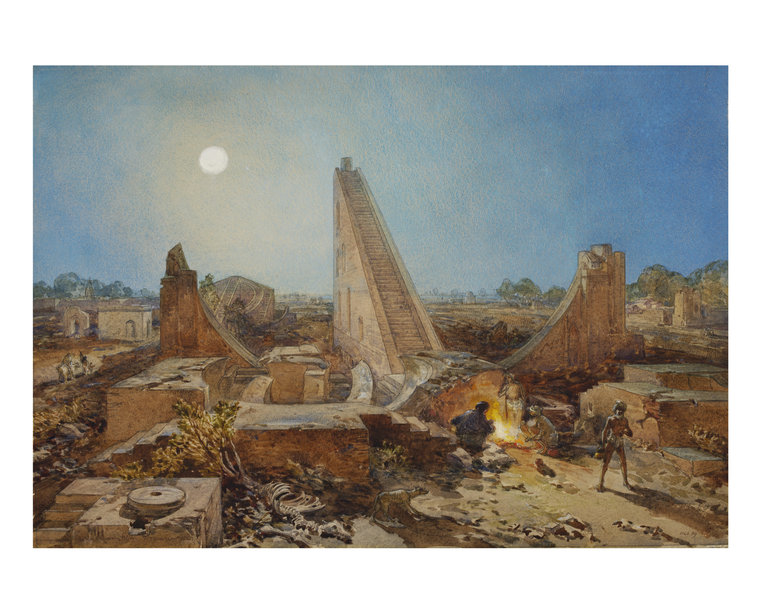