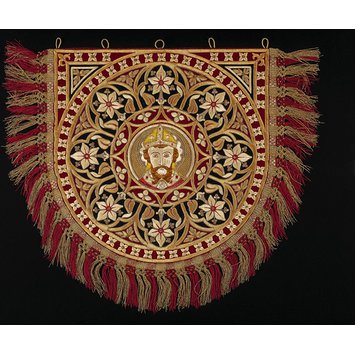 This is a church hood designed to be attached to a back of a cope (the top garment worn by a priest for church services). The hood is seen clearly by the congregation when the priest faces the altar. By designing ecclesiastical hoods as highly decorative items in their own right, Pugin returned to an established medieval practice which had died out in Europe in the 16th century.

This hood depicts Saint Thomas of Canterbury as bishop and is appropriate for the Kent church for which it was designed. The head is seen full-face, as in the manner of church brasses, a form advocated by Pugin. The embroidery is worked in the manner of opus anglicanum (English medieval work). This was much admired and aspired to in the mid-19th century by amateurs and an increasing number of professional church embroiderers.

The embroidery is raised, padded and couched work. The highly professional padded techniques of silver and silver-gilt work show the skills of professional accoutrement makers such as Lonsdale & Tyler, whereas Mrs Powell may well have supplied the central, figurative roundel.

Cope hood of silk velvet with velvet appliqué. The surface is embroidered in silks with raised, padded and couched work in silks and silver gilt wire, thread and purl. Embroidered in the central roundel is Thomas of Canterbury as saint bishop and with surrounding couched gold work all embroidered in the manner of 'opus angelicanum' (English medieval work). The main outer design has radiating padded floral motifs in silks, and silver and silver-gilt work.

Registered File number 1989/1219.
The embroidered decoration is of high standard. English medieval work was much admired in the mid-19th century by amateurs and an increasing number of professional church embroiderers.

One of two hoods depicting St Thomas which were designed by Pugin and embroidered for use at St Augustine's church, Ramsgate (see T.290-1989). These were worn on plain copes or those made of jacquard woven silk and wool fabric of the 'Gothic Tapestry' design (see T.289-1989). The head of St Thomas is seen full-face as in the manner of church brasses, a form advocated by Pugin.

By designing ecclesiastical hoods as highly decorative, often figurative, items in their own right, Pugin returned to an established medieval practice which has died out in Europe in the 16th century.

A. W. N. Pugin was a Roman Catholic architect with a crusading mission to revive Gothic as the only morally right style of decoration. He designed these vestments for his own church, St Augustine's, Ramsgate, Kent. His zeal for promoting the Gothic style influenced many churches, not just those that were Roman Catholic. [27/03/2003]

Possibly embroidered by both Lonsdale & Tyler, London, and Mrs Powell of Birmingham.
Made for St Augustine's Abbey, Ramsgate. 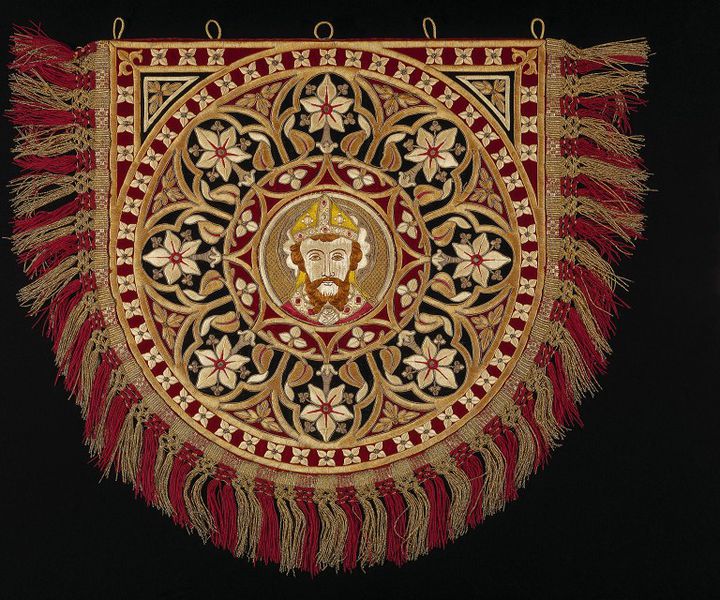