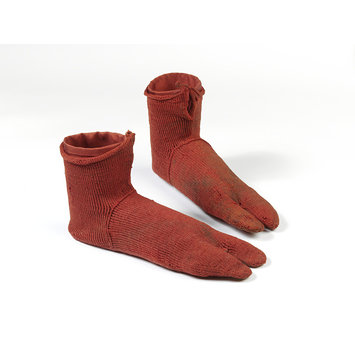 These socks were made in the 4th to 5th century, and were excavated in Egypt at the end of the 19th century. They have a divided toe and are designed to be worn with sandals.

The technique used for making these socks are commonly confused with knitting. They were made in the technique nålbindning, sometimes called knotless netting or single needle knitting - a technique closer to sewing than knitting. These socks were made using three-ply wool.
Some believe that this technique was a forerunner of the faster method of knitting with two or more needles.

This pair of socks is made in the technique nålbindning, sometimes called knotless netting or single needle knitting - a technique closer to sewing than knitting. The socks are in bright red wool and each sock has a divided big toe. The top of the leg has an overlapping slit at centre front; three or four extra stitches are added at the front to form an underflap, ending in a loop, for fastening or tying.

The Romano-Egyptian socks were excavated in the burial grounds of ancient Oxyrhynchus, a Greek colony on the Nile in central Egypt at the end of the 19th century. They were given to the Museum in 1900 by Robert Taylor Esq., 'Kytes', Watford. He was executor of the estate of the late Major Myers and these items were selected among others from a list of textiles as 'a large number of very useful examples'. Those not suitable for the V&A were to be placed at the disposal of the St Albans Museum or any other institution.
(RP 7/1901, RP 89660/1900, RP 1305/1901)

Historical significance: The significance of these socks lies in their use of what is now a relatively little known technique, and the fact that they come from Oxyrhynchus, a Greek colony which was a notable monastic centre by the fifth century.

Technique
Both nålbindning and knitting produce a texture composed of elastic rows of stitches made out of a single thread. Its elasticity facilitates a close-fit for hands, feet and head. Fit is of particular importance in a cold climate but also for protecting feet clothed in sandals only. Nålbindning is much more time-consuming than knitting and requires great nimbleness of the left-hand fingers - an extension of a basic basketry or netting technique, which in its simplest form is a single loop worked through a single loop, and is akin to sewing. This technique is linked with home production for personal use, but is highly skilled. The disadvantage with nålbindning is that only a limited length of yarn (a needleful) can be worked, another length has to be joined - in knitting a thread of indefinite length is used.

The technique nålbindning is without doubt older than knitting, used widely since prehistoric times. The needles used are flat, blunt and between 6 -10 cm long, relatively large-eyed at one end or the eye is near the middle. They are usually made of bone or wood. The mass demand for elastic items of clothing displaced nålbindning by the much faster and more economical knitting, between AD 500 and 1200. However, the technique survived in many rural areas for hard-wearing garments till at least the 19th century (for example, in Scandinavia).

The origins of 'true' knitting might be found in the material from the territory of the Roman Empire, and it is thought that the earliest pieces knitted with two needles were found in Holland and date to the end of the second century AD. So far the earliest knitting is considered to come from Islamic Egypt - 11th century. It is possible that knitting was introduced to Europe from Asia through trade routes to Venice or as a result of the Moorish invasion of Spain (711-712 AD).

Shape
The big toe divided from the others suggest that the socks were probably meant to be worn with sandals. It is unclear whether the socks formed offerings to the dead or were used as foot coverings. Note that the holes have not laddered (though they have spread somewhat). This effect is typical of knitting when the wool breaks, but not of nålbindning.

Pair of red socks in nålbinding, Egyptian, with split toe.

Although at first sight these socks appear to be knitted from a continous length of yarn on two or more needles, recent research has shown that they were made by a technique that preceded true knitting as it is understood today. A detailed description of the technique of single-needle knitting: 'An Ancient Technique' in Textile History, vol. 3, December 1972.

The construction of these socks, which have a turned heel, began at the toe and finished at the ankle. They have division at the big toe so that they could be worn with sandals.

Found in the burial grounds of ancient Oxyrhynchus, a Greek colony on the Nile in central Egypt 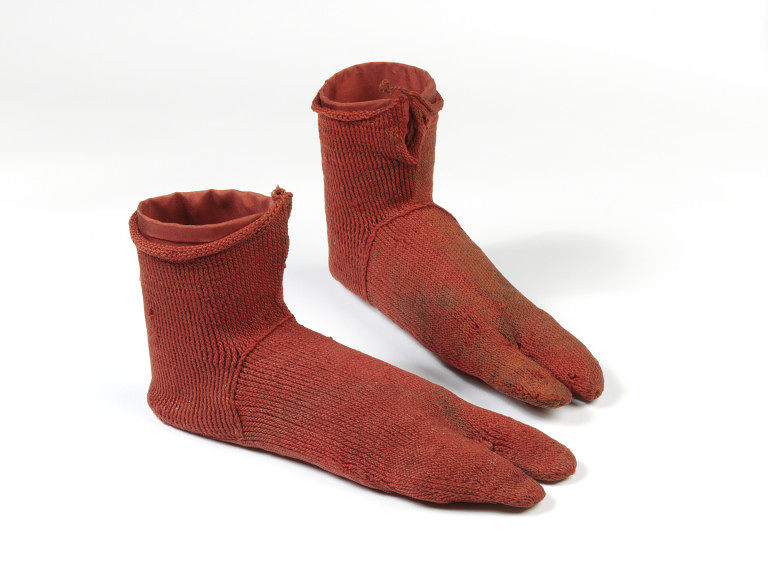