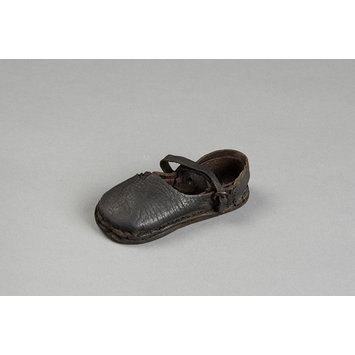 This amazingly modern looking shoe would have fitted a one-year old in the late 15th or early 16th century. It is a well-made and sturdy shoe, perfect for a toddler still mastering its steps. Most of the shoes from this period in the Victoria and Albert Museum were found in rubbish heaps and plague pits around London during the early 20th century. Unfortunately the pair to this shoe seems not to have been found. It cannot have been discarded through excessive wear as it is in nearly perfect condition. The leather of the shoe might have been dyed in a bright shade originally but lying in waterlogged conditions since the early 1500s has removed all colour.

Left shoe of leather for a child with rounded toe and ankle strap with buckle. Strap goes diagonally over instep. Seamless quarters and thick sole. Has lost its insole. The ankle strap and the strap holding the buckle, are slotted into slits in the leather (the quarters) with the spade-shaped endings of each strap keeping them safely in place.

The majority of the English Medieval and Tudor footwear was donated to the Museum by Talbot Hughes. He was a portrait painter whose purchases of costumes were originally for professional use as props in his paintings. He spent 30 years in building up his collection of historical English costume and footwear, apparently buying many items from auctions but also directly from workmen on building sites.

Historical significance: The shoe is significant both as a relatively rare archaeological find and as an example of a (genre) artist's collecting practice in the late 19th century.

In the medieval and Tudor period, shoes for the wealthy and for formal wear were made of silk or velvet. Leather shoes were probably used for more practical purposes, every day wear, travelling and so forth. The location of the London 'finds' of shoes and the fact that some are slashed in the same way as formal shoes suggest that this shoe was possibly used by lower and middle class citizens of London. By contemporary standards this shoe is small, probably the correct size for a one-year old child. It is practical and ergonomic, and would not seem out of place at the Natural Shoe Store today. It is well-preserved, and shows little signs of wear.

In the Middle Ages the only method of construction was for the 'turned-shoe' which had a rand in between the sole and and the upper. In the late Middle Ages a new method developed - the 'welted shoe'. The upper was henceforth attached to an insole and a welt (a strip of leather) which ran round the shoe; a second row of stitches pierced the welt in order to attach insole and welt to the sole. The other change in construction was the moving of the principal upper seam to the centre back of the shoe, thus producing the traditional vamp and pair of quarters (see Swann, June, Shoemaking (Aylesbury: Shire Publications Ltd., Shire Album 155, 1986). The dating of this shoe is speculative as the fact that it has no seam on the upper back might be indicative of 15th century rather than 16th century production.

The medieval and Tudor shoes found in London were made by cordwainers (shoemakers) in London. Guilds of cordwainers were formed in Oxford in 1131 and in London before 1160. The trade standardised measurements for shoes in 1305, a move that suggests that shoes might be acquired both bespoke and ready-made. There was also a profitable second-hand trade in old leather shoes and shoes were often repaired. While most shoemakers were capable of making repairs, they considered the task inferior to that of making new shoes. Different craftsmen, such as cobblers, tended to carry out such repairs. Shoes were sold in towns and at the great medieval fairs.

A large number of leather objects was excavated in London and its neighbourhood from rubbish heaps and plague pits in the early 20th century, notably at Finsbury, Moorgate and London Wall. These 'finds' were not excavations in the modern sense but rather 'finds' made by workmen on building sites and during dredging of the river (see Grew, Francis & de Neergaard, Margrethe, Shoes and Pattens. Medieval Finds from Excavations in London:2 (London: Her Majesty's Stationery Office, 1988). The Museum of London has a complementary collection of shoes.

The majority of the English Medieval and Tudor footwear was donated to the Museum by Talbot Hughes. He was a portrait painter whose purchases of costumes were originally for professional use as props in his paintings. He spent 30 years in building up his collection of historical English costume and footwear, apparently buying many items from auctions but also directly from workmen on building sites.

Found at building sites in London and its neighbourhood in the early 20th century. 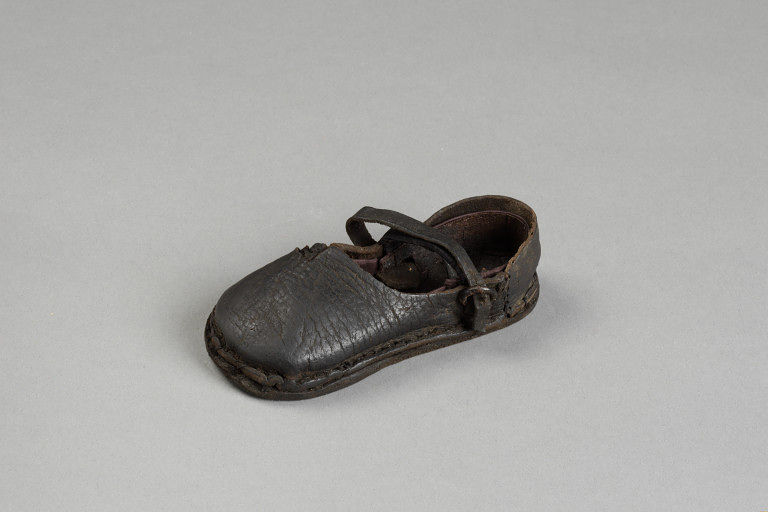