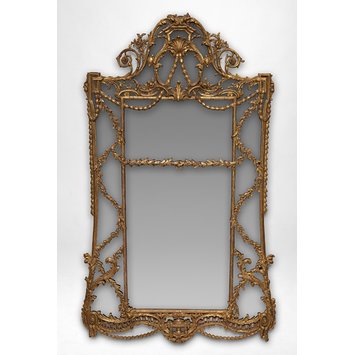 This pier-glass (mirror) may look as though it is made up of carved and gilded wooden sections. However, many of the swags are in fact made of papier-mache, (literally meaning chewed or mashed paper) which have been formed in moulds with a metal wire armature to enable the lengths of ornament to be curved into shape.

The use of papier-mache for picture frames can be traced in England to the later years of the 17th century but it's use became more popular in the 18th century before eventually being industrialised in the 19th century. Much easier to use and cheaper than carving in wood, sculptors and carvers in the early years of the 18th century began to use papier-mache to ornament chimney-pieces and mirror frames as well as interior architectural ornament, especially ceilings. The technique as used for ornamental purposes originated in France though moulded paper was commonly used in Persia, China and the East much earlier. The technique is known in France as papier moule, (moulded paper) and carton pierre.

In 1758, Robert Dossie published a manual of technical processes in 'Handmade to the Arts', in which he described two ways of making papier-mache. One method uses pulped paper mixed with glue and gum arabic which is then pressed into greased wooden or plaster moulds. The second method, as used in this mirror, involved sheets of paper pasted one on top of each other using a thin paste of boiled flour and water which has been mixed with 'size' (glue). These layers are also built up in moulds. By 1763, several makers of papier mache were listed in London trade directories.

Unfortunately, the maker of this mirror is unknown but the neoclassical form and use of repeating ornament is similar to that extensively used by the architect Robert Adam. It was purchased by the Museum in 1926 at time it was seeking to acquire mirrors in the Adam style. It was considered that an example in papier-mache was significantly cheaper than a comparable one in carved wood. Nothing further is known of its history.

Rectangular mirror covered with papier-mache ornament imitating carved gilded wood. Above is a curved pediment with leafy elaborate ornament of scrolling festoons of berried laurel branches and chains of husks. At the centre is a shell from which decend two swags of husks. The sides of the outer frame curve outwards and terminate in scrolls below. The base has a vase in the centre flanked by symmetrical scrolls and festoons. The centre forms a rectangular panel with a branch of husks set across the join in the glass.

The mirror is constructed in three layers. The first is a wooden subframe or stretcher consisting of several lap-jointed and glued sections supporting the mirrored glass and on top of this the decorative ornament. The main rails of the internal and external frames are of wood screwed into the back stretcher and define the limits of the mirrored panels. The acanthus and husk ornament on the face of the mirror between the two frames is a mixture of papier-mache elements, covered with a thin gesso on top of which gold leaf has been applied and some elements in carved gilded wood. The papier mache elements are not modelled in the round and appear to have been pressed from a mould. They are hollow in section. It is difficult to distinguish between the wooden and papier mache parts as the wood used is light and of a low density. Two areas of breaks and losses show metal wire reinforcing the structure
The main mirror panel is bevelled. The join in two plates is concealed by a section of decorative papier mache laurel ornament.The glass in the outer frame is likely to be in sections. The whole is backed with original brown paper. Tears in the paper reveal some of the wooden stretcher.

There are two gilding schemes. The first, as applied on the paper, is water gilding on layers of white gesso , a dark yellow (ochre) and a pink bole covered with gold leaf. Most of this has been worn down but is visible in some areas on top of the pink bole. The second scheme, over the original water-gilding there are areas of oil (mordant) gilding and has been applied on top of the water gilding. This consists of a thin white ground, a yellow tinted mordant layer and then gold leaf.

Here, some of the leafy ornament was carved in wood, but much is moulded papier mâché, a cheaper alternative to carved wood.

Layers of linen-based paper, starch and water were pressed into wooden ornament moulds. Some of the papier mâché was also modelled by hand onto wire supports. Once set firm, individual sections were glued to the wooden sub-frame and gilded. [01/12/2012] 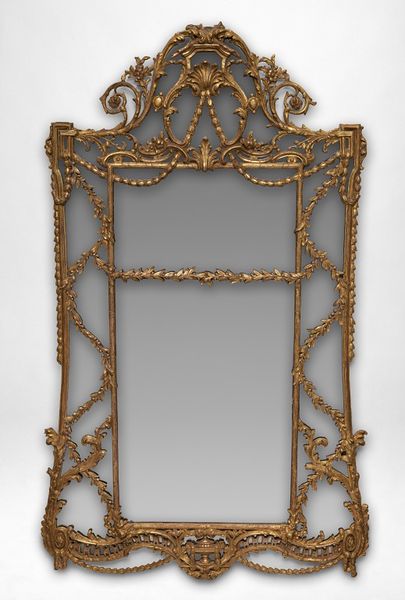