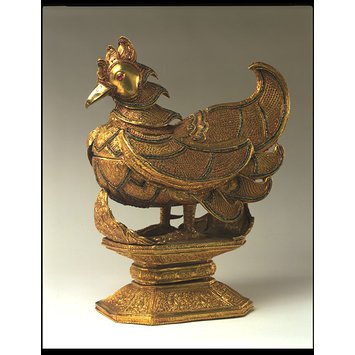 This gold and jewelled container once formed part of the regalia of King Thibaw, the last Burmese king (r.1878-1885). The karaweik, a mythical bird, is a symbol of longevity. The container was used at the royal palace at Mandalay as part of a betel paraphernalia set. The offering of betel--a mildly narcotic chewing quid--was an essential element of traditional Burmese society. Every household, including the royal family's, had a set of utensils for its preparation. Betel leaves, used to wrap the blend of areca-nut shavings, lime and spices, were stored in the karaweik container.

This object was given to the Museum by the Government and people of Burma in generous recognition of the Victoria and Albert Museum's safekeeping of the Burmese royal regalia from 1886 to 1964.

A vessel and cover on a stand, in the shape of a karaweik (a mythical Burmese bird). Chicken like in appearance with its feet, pointed beak, wealth of overlapping body feathers, curled wings and upturned tail. The waisted stand is decorated with panels of floral ornament and at each end a leaf-shaped extension with foliage motifs, curves upwards to support the body of the stand.

Mandalay (City) (An earlier identification of this bird as a karaweik, or mythical cockerel/chicken is probably not correct but may have been related to the fact that it has spurs on its feet. , made)

Filigree work in gold on a gold ground, outlined with bands of rubies and imitation emeralds, with some embossing; eyes of rubies (one now missing)

The container formed part of the Burmese royal regalia which belonged to King Thi-baw, who was the last representative of the Burmese monarchy. The regalia was part of the material requisitioned as indemnity at the end of the third Burmese war in 1885. It was later placed under the custodianship of the Museum (IS.144 to 294-1890). It was returned to the Government of Burma in 1964 except for the Karaweik (IS.159-1890). This was given to the British Government by Ne Win at the time to be kept by the V&A as a token of friendship and goodwill.

Yule, Capt (later Col. Sir) Henry.Narrative of the Mission to The Court of Ava in 1855 London: Smith, Elder, and Co., frontispiece (illustration of similar karaweik as seen in the royal regalia of King Mindon).

Betel-Nut Container
1780–1885
Konbaung period
This container, in the form of the sacred goose (hamsa),
was part of the regalia of King Thibaw, the last Burmese
monarch. At the end of the Third Burmese War, in 1885,
the British government requisitioned the regalia as
indemnity and transferred it to the V&A. When the regalia
was returned in 1964, the Burmese government gave the
container to Britain as a token of friendship
Gold set with rubies and
imitation emeralds
Burma
Presented by the Government of
Burma in generous recognition
of the Victoria and Albert
Museum’s safekeeping of the
Mandalay Regalia (1886–1964)
Museum no. IS.246&A-1964 [14/06/2011] 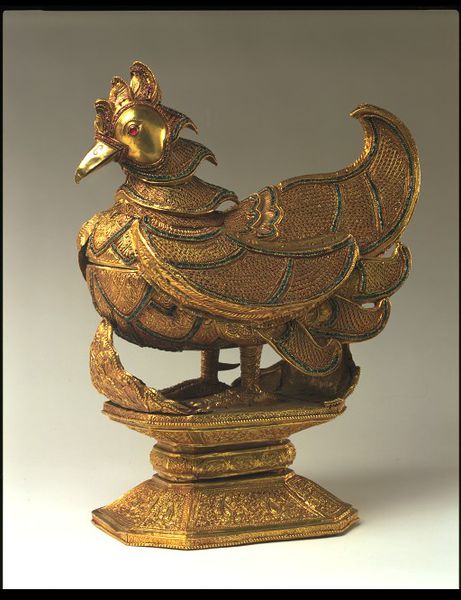